Space viewed as a frontier for business 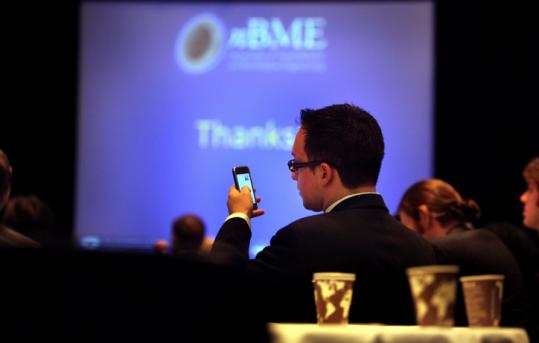 Rocket ships and outer space conjure up images of shuttle launches, moon landings, and the wonders of the unknown beyond Earth’s atmosphere. But for about 130 attendees of the Space Investment Summit yesterday at the Hynes Convention Center, these things are just business as usual.

The summit, which came to Boston for the first time since it started in 2007, gives entrepreneurs with space-related ideas an opportunity to try to convince prospective investors that their ideas are more than science fiction fantasies, but rather the next big thing.

Paul Eckert, international and commercial strategist with Boeing, had a large role in creating the summit, which has previously been held seven times in cities such as New York and Orlando, Fla.

As the executive coordinator of the Space Investor Summit Coalition, Eckert said he tailors the events to investors in the cities where the summits are held.

The summit showcased businesses that specialize in such things as space suits, rockets, and space-aided biotechnology research.

But those space-related businesses may face challenges because many obstacles to commercialized space technology remain.

The biggest challenge is the cost of spaces launches, according to Olivier de Weck, an associate professor of aeronautics and astronautics at the Massachusetts Institute of Technology. The price to get something into space averages $10,000 per pound of cargo.

“Unless we can get cheaper launch, anything people propose is science fiction,’’ de Weck said.

At the summit, Nelson made a presentation on the company, which specializes in rockets that can carry things into space and return immediately without orbiting Earth.

He spoke of XCOR’s ambition to make these suborbital flights fast and easy for deliveries and space tourism.

“Imagine we’re Netscape and it’s 1992,’’ he said, using the Internet as an analogy to the business possibilities of space. “Nobody knows what the Internet is, but give it two or three years and it’s going to change everything.’’

Charles Chafer, the chief executive of Houston-based Celestic, came to the summit seeking a $1 million investment for his company, which specializes in “memorial space flights,’’ or final voyages for people who wish to have their ashes flown into space.

Chafer said the company’s list of customers has “been doubling’’ since it made its first launch in 1997, a rocket that held the remains of 24 people, including cultural icon Timothy Leary and “Star Trek’’ creator Gene Roddenberry.

Chafer said that while he had initially expected “Star Trek’’ obsessed baby boomers to respond to the idea, he has been surprised by the diversity of customers.

Potential investor Richard Kimball, senior director of the Bigelow Co. investment bank, who took part in a three-person panel discussion, asked Chafer how the company can define its potential customers.

Ultimately, Kimball expressed enthusiasm about the potential of aerospace technology.

“They’re doing extraordinary things,’’ he said of the entrepreneurs in the field. “I think these technologies are key to moving this industry forward.’’