New England is a leader for programs aimed at getting kids involved in math and science. But, compared with the rest of the nation at least, our kids don’t seem be participating. 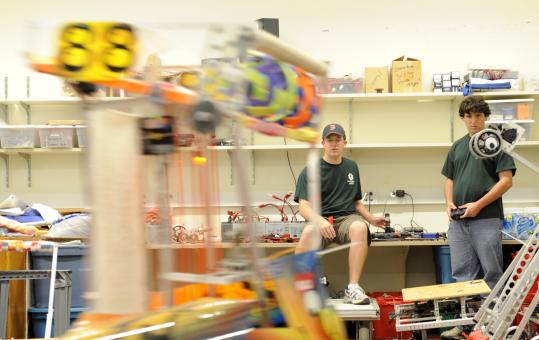 The team that kicked off its 2009-2010 season last Wednesday at Bridgewater-Raynham Regional High School has corporate sponsors and more than a half-dozen coaches. About half of the 80 students on the team travel to regional and national competitions.

And the team has absolutely nothing to do with football or any other sport played on a gridiron, diamond, or rink. The TJ2 Robotics team, now in its 15th season, builds remote-controlled robots and enters them in the annual FIRST Robotics competition. Instead of a locker room, it convenes in a machine shop filled with lathes and drill presses. Its alumni have ended up with engineering-intensive jobs at places like NASA and NASCAR.

FIRST is just one of the programs headquartered in New England that are taking a new approach to the challenge of getting kids interested in science and technology. At the Massachusetts Institute of Technology, there’s a summer program called “Science of Baseball’’ that invites middle schoolers to study physics in the morning and play ball in the afternoon. At nine Computer Clubhouses around Boston, students get a chance to hang out with one another and adult mentors while learning sophisticated software like Autodesk Maya, which is often used for movie special effects.

But while the region is undeniably an epicenter of new ini tiatives that seek to pique students’ interest in science, technology, engineering, and math (topics often encapsulated by the acronym STEM), we don’t actually seem to be funneling enough smart, young people into those fields.

While across the rest of the nation students have been expressing a growing desire to pursue careers in STEM, here in Massachusetts that interest has been waning. (This year, 22 percent of SAT-takers in Massachusetts said they planned to pursue a STEM-connected career, compared to 28 percent nationally.) And our public universities are below the national average when it comes to granting STEM-related degrees, and significantly below leading states like Minnesota and North Carolina, according to Jean Supel, a research manager at the Donahue Institute of the University of Massachusetts.

What could we be doing better?

There’s no lack of creativity, energy, and inventiveness - from nonprofits and private companies alike. Erika Ebbel, a PhD student at Boston University’s School of Medicine, runs the WhizKids Foundation, which sends students pursuing advanced degrees into middle schools. “We found that around fifth grade, kids stopped thinking science was fun - especially girls,’’ says Ebbel. She recruits nonnerdy instructors - “they’re very friendly, and they’re people the kids would like to be like’’ - to go into classrooms and conduct hands-on experiments about earthquakes, microscopic worms, and making soap.

WhizKids has also developed a daylong science program called “The CSI Experience,’’ inspired by the television series, which invites students to explore a crime scene, lift fingerprints, and do hair identification using microscopes. But Ebbel, an MIT alumna who was crowned Miss Massachusetts in 2004, says maintaining financial support for the program has been tough over the past year because of the recession.

Waltham-based Raytheon Co. sponsors the national Mathcounts Competition, which tests middle-schoolers’ facility with figures. (The 2009 finalists traveled to the White House last July to meet the president.) IRobot Corp. of Burlington launched a new website recently, Spark.iRobot.com, intended in part to help teachers use robots as an educational tool.

FIRST (the acronym stands for “For Inspiration and Recognition of Science and Technology’’) was founded in 1989 in Manchester, N.H., and today about 200,000 students in 50 countries participate in its competitions, according to Woodie Flowers, a mechanical engineering professor at MIT and chairman of FIRST’s advisory board.

When students build a robot together, Flowers says, “Mother Nature slaps you around. It’s completely untenderized feedback about which engineering solutions will work, and which ones won’t.’’

And students like the competitive aspects of trying to build the robot that can most successfully play a complicated game each year. “A lot of politicians will come to a FIRST event and they’ll say to the kids, ‘You’re all winners.’ And the kids know better than that,’’ Flowers says.

In Massachusetts, we’ve solved half of the problem when it comes to cultivating the next generation of scientists, engineers, and inventors. Students here already get the best education in science and math you can get in our country, according to a 2007 federal study.

But those students aren’t winding up in related jobs.

“We’ve done well with test scores,’’ says Murray. “But it’s not coming out the other side, in terms of kids majoring in these subjects or going into the fields. STEM jobs are one of the few areas that has seen job growth in this downturn, and companies tell me they still don’t feel they have the right workforce available to them.’’

Murray mentions that an intern in his office compiled a list last summer of more than 150 STEM-related projects in Massachusetts alone. Joyce Plotkin, former president of the Massachusetts Technology Leadership Council and the head of a new STEM program for sixth-graders launching next month, says, “We have a thousand points of light here, but we need more of a sense of shared mission and direction.’’

We also need more funding for the initiatives that work best, more sharing of what’s most effective at getting students energized and engaged, more ideas about keeping smart kids in Massachusetts after they earn degrees, and more volunteers. In an innovation economy powered by hundreds of thousands of very smart people, why don’t we have armies of volunteers eager to visit classrooms, organize field trips, reinvigorate the staid school science fair, or mentor kids on robotics teams?

“It’s unfortunate that scientists don’t take time to brag about what they do, and explain that it is fun and cool,’’ says Liz Calef, a physics teacher at Bridgewater-Raynham who serves as head coach for the robotics team. “I think scientists and people who work in technology need to get out there more, connect with students, and explain the contributions they make to the world.’’

What are we waiting for?

Scott Kirsner can be reached at kirsner@globe.com.