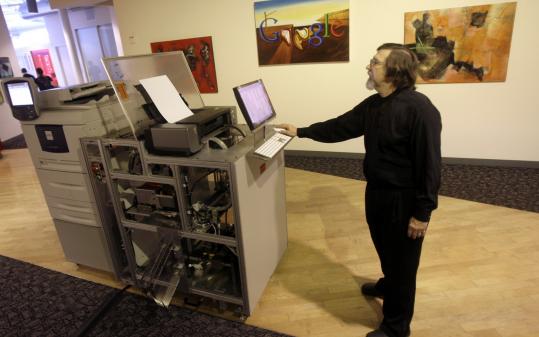 John Bivens, of On Demand Books, demonstrated the printing of a book at Google headquarters recently in Mountain View, Calif. Google plans to scan millions of books and make them searchable and available for purchase online. (Jeff Chiu/ Associated Press)
By Larry Neumeister Associated Press / September 23, 2009

NEW YORK - A $125 million settlement of a lawsuit that would give Google Inc. the digital rights to millions of out-of-print books will be renegotiated in light of the US Department of Justice’s contention that the deal probably violates antitrust law, lawyers involved in the case said yesterday.

Lawyers for The Authors Guild, the Association of American Publishers, and other plaintiffs said in court papers that they and Google met with senior Justice Department officials last Thursday and agreed to work with the government to resolve concerns.

The case involves Google’s plans to scan millions of books and make them searchable and available for purchase online, with publishers and authors getting most of the money from the sales of books still protected by copyright. Google says the service will revitalize works that might otherwise be forgotten.

The Justice Department told US District Judge Denny Chin in a brief filed last week that the agreement threatens to give Google the power to increase book prices and discourage competition, though it said a renegotiated settlement might obey US copyright and antitrust laws.

The government encouraged an improved settlement, saying it “has the potential to breathe life into millions of works that are now effectively off limits to the public.’’

Lawyers for the authors and publishers said in court papers yesterday that, “as the United States government put it, no one wants ‘the opportunity or momentum to be lost.’ ’’

They urged Chin to delay a hearing scheduled for Oct. 7, saying that a new agreement may take away some objections among the roughly 400 opinions, both pro and con, which were filed with Chin.

The lawyers noted that the responses included hundreds of objections from individuals and corporate entities. In addition, the governments of Germany and France and the attorneys general in Connecticut, Kansas, Missouri, Pennsylvania, Texas, and Washington had objected.

Google spokesman Gabriel Stricker acknowledged the court filing by plaintiffs in the case and said in an e-mail that the company is “considering the points raised by the Department of Justice and others, and we look forward to addressing them as the court proceedings continue.’’