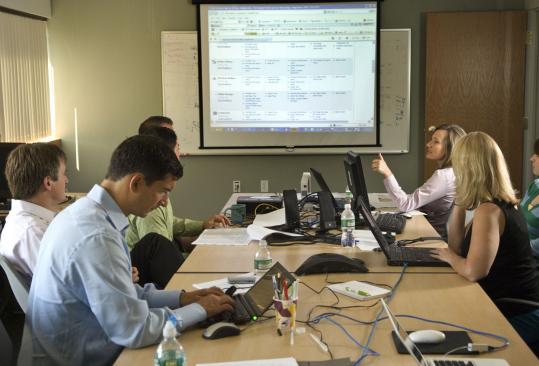 Kayak.com’s headquarters are in Norwalk, Conn., but its technology team (above) is located in Concord. The technology team doubled in size this year. The company has been visited by investment bankers interested in taking it public. (Wiqan Ang/ Globe Staff/ File 2008)
By Scott Kirsner Globe Columnist / September 20, 2009

Book a cruise to Bermuda, research the top hotels in Sydney, or hunt for the lowest fare for a trip to Vancouver, and the odds are good you’ll be interacting with a Boston-area Internet travel company. The area’s online travel cluster has grown slowly - and quietly - since the mid-1990s.

But that under-the-radar profile seems like it’s about to change.

Kayak.com, which operates a popular price comparison service, is talking to investment bankers about the possibility of an initial public offering, and plans to spend $50 million on a splashy new offline marketing campaign later this year. ITA Software Inc. - which supplies the computing engine that powers many travel sites like Orbitz - is about to launch an ambitious new product that has been in development for five years. TripAdvisor, a Web-based trove of reviews and ratings for travelers, has been expanding into new markets. And a new company, Goby, plans to take the wraps off its site this week.

The oldest of the companies, Cambridge-based ITA, was founded in 1996 by Jeremy Wertheimer, an alumnus of MIT’s artificial intelligence program. ITA’s band of programmers got very good at collecting all kinds of information about airfares, schedules, and available seats, and made it possible to search for tickets in a way that was jaw-dropping for the mid-1990s. Instead of just looking at simple itineraries between Boston and Austin, Texas, for instance, ITA could tell you that you could save $100 if you were willing to fly from Providence, or take one airline down and a different one back.

Without any venture capital funding, the company was turning a profit by 1998, helping airlines serve up information about their routes and prices to customers on their websites.

“It was so hideously complicated to do that most people just said, ‘We’ll pay you to do it,’ ’’ Wertheimer says.

In 2006, ITA raised $100 million to fund a big undertaking: building a new reservations system for the airline industry.

“The big three existing systems date back to the 1950s and 1960s, and they were written to run on mainframes,’’ Wertheimer says. “We thought we should build an entirely new transactional system that would run on Intel-based computers, and be written in the 21st century.’’

He is close to an agreement with Air Canada to start booking tickets using the system next year.

Incredibly, Wertheimer says he hasn’t touched his $100 million war chest. While he knows new investors expect some kind of “exit’’ - like an IPO or a sale - he contends he doesn’t feel pressured to make something happen in the near term.

Kayak got its start in the Cambridge offices of General Catalyst Partners. (Kayak and ITA share two of the same backers: General Catalyst and Silicon Valley-based Sequoia Capital, the firm that helped launch Apple and Google.) The company started by making it easy for consumers to shop for the lowest-priced or most convenient airfare.

Unlike ITA, which works behind the scenes and earns revenue from its partners, Kayak built its own site and generates money from advertising and a small per-transaction referral fee that most airlines pay. Kayak later made it possible to search for deals on rental cars, hotels, and cruises.

The company is also very focused on bringing its simple-but-powerful approach to booking travel to mobile phones. Its iPhone app is currently high on Apple’s list of most-downloaded free travel applications. The company also has an app for the BlackBerry and is working on apps for Android, Nokia, and Windows Mobile devices, says cofounder and chief technology officer Paul English.

Kayak’s headquarters are in Norwalk, Conn., but its technology team, which doubled in size this year, works in Concord.

English acknowledged that the company has had some recent visits from investment bankers interested in taking it public. “We’re trying to figure out timing,’’ English says, with his customary bravado. He seems to have no desire for Kayak to be acquired.

“[CEO Steve Hafner] and I have sold companies in the past,’’ English says. “We want to push this thing as hard as we can.’’

Newton-based TripAdvisor was acquired, in 2004, but the company hasn’t stopped growing as a unit of Expedia Inc., the publicly traded online travel conglomerate. Last year, TripAdvisor bought FlipKey, a site for renting vacation homes that had been founded by local entrepreneurs, and this year it has been expanding in foreign markets like China, Sweden, and Brazil.

“We’re continuing our worldwide march through all the different countries you could want to be in,’’ says chief executive and cofounder Stephen Kaufer. The company recently passed the 500-employee mark this year, and its collection of sites is visited by 25 million unique users a month.

The newest member of the travel cluster is Boston-based Goby (originally, it was known as Byledge Technologies).

Though none of Goby’s executives are talking yet - the site is officially still in invitation-only beta-testing mode - several people with knowledge of what Goby is up to say that it will try to make hard-to-find travel information more accessible. How would you identify all of the companies that run boat excursions along the Amalfi Coast, for instance, or all of the fly-fishing guides in a particular region of Montana? Goby’s aim is to find and organize that kind of disorganized information, and save consumers hours of trolling the Web for it.

Goby’s biggest challenge as a brand-new site, says Kaufer, will be “getting traction with consumers.’’ Positive buzz about a new site can spur people to visit it once, but “getting people to come back and turn into loyal users is really hard,’’ he says.

“A lot of people ask me if I think the travel space is too crowded,’’ English says. “I look at it as a great place to start companies. Most travel websites are really hard to use. If you can build a new site that’s simple and fast, there’s definitely an opportunity. But doing that is harder than it sounds.’’

© Copyright 2009 Globe Newspaper Company.
Travel site Hub
Booking a trip? Odds are you'll interact with at least one of these local Internet companies.

TripAdvisor
Newton
Owned by publicly traded Expedia Inc.
Best-known for its user reviews and ratings of hotels, restaurants, and attractions. Also owns CruiseCritic.com and SeatGuru, an in-depth guide to the best seats on various airlines.

Goby
Boston
Funded by Flybridge Capital Partners and Kepha Partners.
Still in stealth mode, company’s motto is “create your own adventure.’’ Will help travelers find obscure information and things to do that aren’t easily accessible through today’s travel sites.