Generations of fans take game controllers in hand and try to play like John, Paul, George, and Ringo 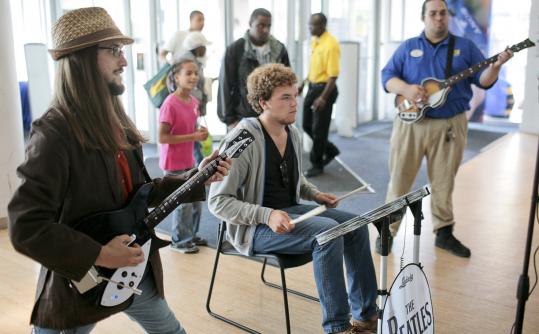 The display in the Best Buy store in Boston’s Back Bay looked like Beatlemania gone digital.

It was the first day of sale for both, and if the cluster of interested shoppers yesterday afternoon was any indication, the second coming of the Beatles will reach a wide, inter-generational swath of buyers.

Dan Zunk, a 20-year-old freshman at Berklee College of Music, who described himself as a “huge Beatles fan,’’ tried out the new game with two friends.

“Man, I could play this all day. Seriously,’’ he said as he energetically attacked the guitar-shaped game controller.

The game, which is available for the Microsoft Xbox 360, the PlayStation 3, and the Nintendo Wii, allows fans to use instrument-like game controllers to “play’’ The Beatles’ catalog of music. Additionally, a first in a music video game, The Beatles: Rock Band includes three-part vocal harmonies.

Zunk said he is considering buying the game, which retails for $59.99 for just the software for buyers who already have Rock Band controllers. A premium bundle that features the game and controllers that look like the Beatles’ own instruments is priced at $249.99.

Jacqueline Royce, 76, is considering buying the game for her grandchildren, who range in age from 20 years old to 6 months.

“My children grew up with the Beatles,’’ she said, adding that the band’s music “was very important in all of our lives.’’

The launch of the video game was accompanied by the release of two box sets of Beatles music from Apple Corps Ltd. and EMI. “The Beatles Stereo’’ box set, which includes the group’s initial four albums in stereo on CDs, is priced at $259.98. A second box set, “The Beatles Mono,’’ which collects the band’s early mono mixes, is selling for $298.98.

Yesterday, the Newbury Comics store in Norwood hosted a The Beatles: Rock Band contest and a performance by All Together Now, a Beatles tribute band.

The Beatles: Rock Band was developed by Harmonix, which is owned by Viacom’s MTV Networks, and Apple Corps Ltd., the company established by the Beatles. Harmonix held a party the night before the release at 33 Restaurant in Boston.

“We’re thrilled people are being swept up in Beatlemania all over again,’’ said Harmonix spokesman John Drake.

“It is still way too early to get a take on sales,’’ said David Cole, an analyst with DFC Intelligence, a market research firm in San Diego that specializes in interactive entertainment. But Cole added that the big question is whether the game will “have legs beyond the first month or so of release.’’

Although music games sales are down, Cole said that the huge push behind the title could allow The Beatles: Rock Band to buck the trend and “promote the Beatles as a band to a new generation.’’

That would be in addition to generations who are already hooked.

Yesterday at Best Buy, Dermot McGrath, 60, was keenly interested in the display of the game.

McGrath, who replied, “Of course,’’ when asked whether he was a Beatles fan, said he has yet to play Rock Band, but was going to get it for his son.

D.C. Denison can be reached at denison@globe.com; Sean Teehan at steehan@globe.com.

Scenes from the new video game "The Beatles: Rock Band"

A look at some notable game titles due out this fall.