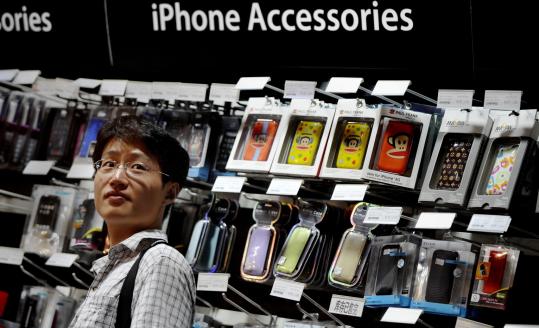 A man walks past a display in Shanghai. China Unicom will become the first official distributor of the Apple iPhone in China. (Philippe Lopez/AFP/Getty Images)
By Mark Lee Bloomberg News / August 29, 2009

Apple Inc.’s iPhone will go on sale in China in the fourth quarter, entering a market that has more wireless subscribers than the combined populations of the United States and the 16 nations that use the euro.

China Unicom (Hong Kong) Ltd., the country’s second-biggest provider of mobile-phone service, will sell the iPhone 3G and the 3GS models, chairman Chang Xiaobing said yesterday. The three-year deal isn’t exclusive, Apple said. That means other carriers may offer the iPhone in China. Unicom will subsidize the iPhone handsets, Chang said, without saying how much they would sell for.

Apple will compete with Research In Motion Ltd.’s BlackBerry and handsets powered by Google Inc.’s Android software in China, where shipments of smart phones may triple by 2013, according to research company IDC. The world’s third-biggest economy has continued to grow during the global recession. China has 695 million mobile-phone users.

“If Apple can get into the market early, there’s a substantial opportunity for them to win subscribers,’’ said Jeffrey Fidacaro, with Susquehanna Financial Group.

Unicom, which trails China Mobile Ltd. in the wireless market, may use the iPhone to attract higher-spending customers and bolster demand for more profitable Internet services, such as Web browsing and game downloads. Unicom announced the agreement with Apple as it reported a 45 percent decline in first-half profit yesterday. “Unicom definitely needs the iPhone, or any type of competitive edge, as a game changer,’’ said Duncan Clark, chairman of BDA China, a technology research firm. Unicom is the only Chinese carrier using technology that’s compatible with the iPhone, according to Clark.

Unicom had 141 million wireless-phone users at the end of July, compared with China Mobile’s 497 million.