Woven deep into our lives

World Wide Web at 20 holds sway over most business, communications 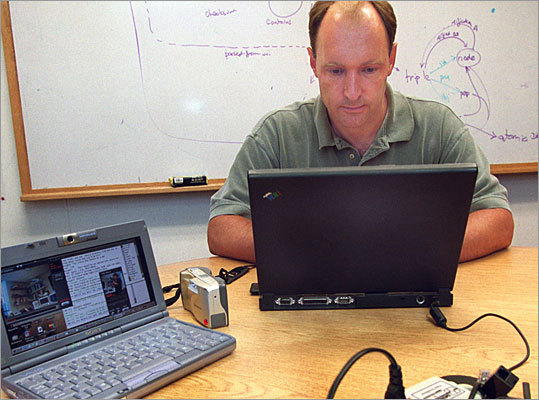 It was a technical paper with the simple title "Information Management: A Proposal," written by a researcher at a European physics laboratory and filled with esoteric terms like hypertext and browser.

It was also the birth certificate of the World Wide Web, a technology that's generated immense new wealth and transformed the ways we work, learn, and amuse ourselves.

Twenty years ago this month, Tim Berners-Lee, then a researcher at Conseil Européen pour la Recherche Nucléaire, or CERN, in Switzerland, handed in his proposal for a new kind of computer network. That paper and the technology it envisioned would spawn such giant enterprises as Google, Facebook, MySpace, Yahoo, Amazon, and eBay. At the same time, the Web "has replaced countless other services and resources," said Ted Schadler, an Internet analyst at Forrester Research in Cambridge. Newspaper circulation dwindled as readers turned to the Web instead; travel agents shut down as tourists book their trips online. And millions of us started to watch our favorite shows on computers instead of TV sets.

Berners-Lee, now based at the Massachusetts Institute of Technology, oversees W3C, the global organization that maintains the Web's technical standards. Instead of patenting his 1989 brainstorm, Berners-Lee insisted the idea must be given away at no charge, or few people would use it. "It took 18 months for my colleague Robert Cailliau and me to persuade the CERN directors not to charge royalties for use of the Web," said Berners-Lee in a speech last year. "Had we failed, the Web would not be here today."

The World Wide Web giveaway spawned an entrepreneurial frenzy as companies sought new ways to profit from Berners-Lee's generosity. But nobody could make money on the Web until people began to use it.

Berners-Lee built his first primitive browser in late 1990. It was entirely text-based, with none of the pretty pictures you find on the Web today, and you had to type commands to move from page to page. But it caught the attention of two University of Illinois students, Marc Andreessen and Eric Bina, who created a new browser that could show photos and could be controlled by clicking a mouse. Mosaic was the first browser to be widely used.

When computer entrepreneur Jim Clark saw Mosaic, "it dawned on me, this was going to be massive," he said. So in 1994, Clark and Andreessen formed Net scape Communications Corp. "There were a lot of people who thought I was absolutely nuts," said Clark. "The Internet is free. How was I going to make any money out of this business?"

Clark found he could sell Netscape browsers to businesses even as he gave them away to the general public. He built Netscape with the ability to encrypt financial transactions and helped create the market for online retailers like eBay and Amazon.

In 1995, Clark sold stock in Netscape to the public. It was one of the most successful stock offerings ever, raising $2 billion almost overnight.

It was also the last straw for software giant Microsoft, which declared war on upstart Netscape. Benjamin Slivka, a codeveloper of Microsoft's rival Internet Explorer browser, remembers a desperate effort to catch up. "I and the rest of the team worked pretty insane hours," Slivka said - as much as 100 hours a week for 17 months.

By 1996, Microsoft had a first-rate browser, which it included free with its Windows operating system. This one-two punch destroyed Netscape, and led to antitrust lawsuits against Microsoft in the United States and Europe. But Web access became a global way of life.

Of all the uses to which the Web was put, "the incredible willingness of people to share the information they have" was a huge surprise to Vint Cerf, chief Internet evangelist at Google Inc. and co-inventor of the Internet's core data protocols. "I hadn't anticipated that there would be such a huge response."

Cerf also noted the social power of the Web, which lets people seek out others who share their tastes. "With the World Wide Web and search engines," said Cerf, "you had ways of finding people who had common interests, without knowing who they are." That insight has spawned sites like Facebook and MySpace, where it's easy to interact online with like-minded people.

The Web keeps changing the world, with help from wireless data networks and cheap handheld Internet devices. Netscape cofounder Jim Clark is an investor in Clearwire Corp., which is building a network to deliver high-speed data to handheld devices. Google's Cerf said the idea is to expand Web services into poorer countries where people can afford a phone but not a full-fledged computer.

Other innovators are making the Web smarter, with software to help Web computers "understand" data. Mathematician Stephen Wolfram recently disclosed plans for a new website, Wolfram Alpha, that will answer questions typed in ordinary English. Ask Google "what was the Beatles' biggest hit?" and you get 2.3 million Web pages written by Beatles fans. If Alpha works as advertised, it will simply respond, "Hey Jude."

Tim Berners-Lee, notorious for being press-shy, turned down requests for an interview. But today, he will be at CERN, celebrating his own biggest hit.

See key moments in the history of Web in photos and video.