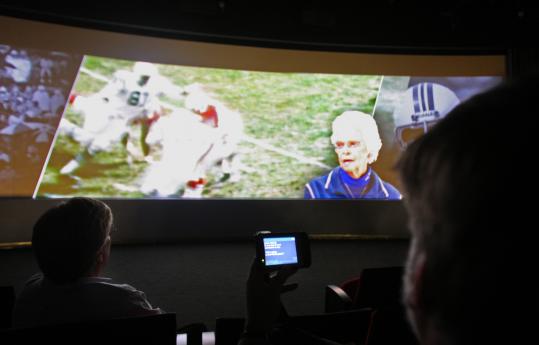 F OXBOROUGH - New England Patriots fans with visual or hearing impairments soon can get closer to their team, thanks to a hand-held device that resembles a BlackBerry set in a thick rubber case.

The Hall at Patriot Place, the Kraft Group's five-month-old Patriots football hall of fame next to Gillette Stadium, this week expects to add a listening and closed-captioning system that will allow people with disabilities to experience the museum in much the same fashion as visitors who are not disabled.

The hand-held devices are pocket computers that pick up infrared or FM radio signals beamed from transmitters in the ceiling. The system tracks visitors as they move about, triggering audio descriptions for the blind and closed captioning or enhanced audio for those with hearing problems.

The technology allows visitors to move about the museum at their own pace. Audio and video broadcast at the museum are synchronized precisely with the information on the devices.

"We want people who are disabled and not disabled to have a common experience when they come here," said Paul Fruia, project manager for Houston-based Softeq Development, the company that installed the system for team owner Robert Kraft's organization.

The museum features wrap-around video screens that show highlights of the Patriots' three Super Bowl victories and other key games. There are also game balls, uniforms, memorabilia, and interactive kiosks.

One of the more popular exhibits is a re-created huddle that includes life-size statues of players and quarterback Tom Brady calling a play. Visitors can stand in the huddle and hear Brady bark instructions. For a visitor who is deaf, the hand-held device runs closed captioning at the same time Brady is speaking. Visitors who have partial hearing can wear headphones that receive enhanced audio from an FM transmitter. For those who are visually impaired, the device describes the scene in the huddle.

The Hall at Patriot Place is one of the first US museums to use this technology. Disney World, in Orlando, Fla., and the World of Coke in Atlanta recently installed similar systems.

"There are not many museums anywhere that allow people with sensory disabilities to have this kind of access," said Kevin McGuire, a consultant who has advised Kraft Group on Gillette Stadium and the Patriot Place shopping and entertainment complex.

Activists and advocates for the disabled say they welcome the system.

"This is a state-of-the-art system that makes the best possible use of technology," said commissioner Heidi L. Reed of the Massachusetts Commission for the Deaf and Hard of Hearing. "It is an important step forward."

Lise Hamlin, director of public policy and state development for the Hearing Loss Association of America, said the key aspect of the system is that it allows disabled visitors to go through the museum at their own speed.

Engineers were doing final installation and testing of the system last week. It is expected to be fully operational this week.

While the system at the Patriots' hall is new, the technologies it uses have been around for some time. Infrared signals have been in widespread use since television remote controls were invented decades ago. Closed captioning was developed in the 1970s. And the hand-held computer is similar to the mobile computing and communication devices that have flooded the consumer market in recent years. The rugged casing allows the device to survive a drop to the floor and makes it water-resistant.

Fruia, the Softeq project manager, said what makes the device special is its software, which allows the machine to perform multiple functions in response to users' differing needs.

Larry Goldberg, director of media access for WGBH public broadcasting in Boston, said, "It is a matter of taking a device that has common mainstream uses and reengineering it for another population."

For those with disabilities, however, technological advancement has been a mixed blessing.

Some innovations, such as voice recognition and closed captioning, have dramatically helped them to overcome their disabilities. But high-technology products aimed at mass markets often make no provisions for the disabled, effectively pushing them further from the mainstream.

"Advanced technology can leave people with disabilities behind," said Rosaline Crawford, director of the National Association for the Deaf Law and Advocacy Center.While almost all television shows now have closed captioning, only a small proportion of US movie theaters are equipped with closed captioning or assistive listening technology.

Many museums have descriptive audio for the blind or visually impaired, but rarely are there closed-captioning devices for the deaf and hard of hearing.

WGBH's media access group produced the closed captioning and audio descriptions for the devices used at the Hall at Patriot Place. The public broadcasting station has been a pioneer in such technologies since it invented closed captioning for a Julia Child cooking show in 1972.

Softeq officials say devices designed for people with disabilities could eventually have wider uses, such as foreign language translation and special programming for children.

Ryan Dour, 29, who is blind and lives in Chicago, used devices like the ones at the Hall at Patriot Place during a recent visit to Disney World. He said the system transformed his park experience and enriched his life. He is planning another visit to Disney World this winter.

"It's about having the opportunity to be included in the experience," Dour said. "Now when the rest of the audience is laughing, I'm laughing, too."