Too often, house fires are the dark side of holidays, fire officials say 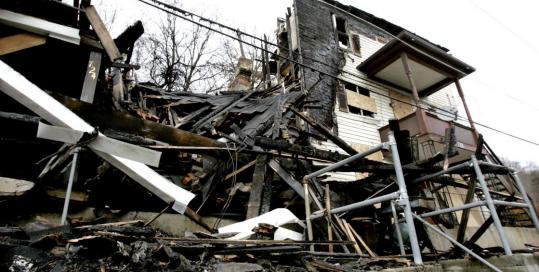 PITTSBURGH - The hand-held Nintendo was carefully wrapped and placed on the dining room table. Upstairs were the gifts that Santa would put under the tree on Christmas Eve. The tree was ready to go up.

Instead, while driving her daughter to a party, Lisa Cochran got a call telling her all had been destroyed in a devastating fire.

It remains unclear what caused the fire in Cochran's suburban Pittsburgh home, which flattened it and the house of her next-door neighbor, Teea Gantt.

What is clear is that winter - especially around the Christmas holidays, with the combined hazards of trees, candles, electric lights, and space heaters - is the hot season for house fires.

More house fires occur between Christmas Eve and Jan. 6 than at any other time of the year, and Christmas tree fires are especially deadly, with an average of one in 15 resulting in death, compared to one in 131 overall, according to the National Fire Protection Association, based in Quincy, Mass.

"This is always a bad time of year," said Chief Duane Dick of the volunteer fire department in Pitcairn, a town about 15 miles east of Pittsburgh. His company responded to the 10:30 a.m. call on Dec. 13 that the Cochran home was ablaze.

But consumers may be surprised to learn the standard-issue ionization smoke detectors used in an estimated 90 percent of American homes might not alert them to a fire in time to escape. Gantt said the smoke in her home was thick by the time she was awakened by her barking dog, but none of her detectors had gone off.

One of the newest technologies is a wireless network that triggers all the smoke detectors in a building nearly simultaneously once a fire is sensed.

"Just making sure that people have a working smoke detector in their home makes a significant difference in the threat [of injury] that there is from fire at their home, especially at this time of year," said Gregory Cade, assistant administrator for the US Fire Administration.

Cochran and Gantt, both single mothers, lost thousands of dollars in clothing and furniture in the fire, as well as items, such as photos, that are irreplaceable. The American Red Cross provided both families with temporary shelter at a Holiday Inn.

Neither has insurance, and they are both hoping donations will help them buy clothing for themselves and their children, as well as recoup some of the Christmas gifts lost in the fire. Cochran has a 5-year-old daughter, and Gantt has three children, ages 7, 6, and 3.

"We have lost everything," Gantt said. "The only thing that we were able to save was my son's bike that was outside."

Between 2003 and 2006, US fire departments responded annually to an average of 240 home fires caused by Christmas trees, according to the most recent data collected by the National Fire Protection Association. These fires led to an average of 16 deaths, 25 injuries, and $13.1 million in damage each year.

Pittsburgh Fire Chief Darryl Jones said Christmas trees should be watered and put far from a heat source that can dry them out or ignite them. Extension cords and other electrical supplies should have a UL or Underwriters Laboratories label so it is clear the product has been tested for safety, he added, noting that overextending the power supply of a cord can cause it to heat up and ignite flammable items nearby.

"Having a tragedy like this around the holidays is something you never forget. You always associate the holiday with that tragedy," Jones said.

Fire officials agree that smoke detectors are crucial to saving lives. But choosing one can be tricky.

Cade, from the fire administration, prefers models that have ionization and photoelectric systems, making them sensitive to smoky fires and flames.

In many cities, residents can contact the fire department and have them install detectors. Pittsburgh residents are able to get photoelectric detectors with 10-year-life lithium batteries as part of its giveaway program, Jones said.

Joseph "Jay" Fleming, deputy chief of the Boston Fire Department, has been on a nearly 20-year crusade to convince states, fire departments, and homeowners that they must replace ionization detectors with photoelectric ones.

Some states, including Massachusetts and Vermont, have already changed regulations to require photoelectric detectors in some areas of a home.

Wireless networks are also good because they ensure all detectors go off almost simultaneously, Cade said. But detectors can be hard-wired to go off together, he added.

What's more, most insurance companies offer discounts to people that have smoke detectors.

MetLife Auto and Home, for example, offers a 10 percent discount if a homeowner has a fire alarm that is directly connected to the local department, said Ted Mitchell, a spokesman for MetLife. A 5 percent discount is offered to those who have functioning fire extinguishers, deadbolts, and smoke alarms in their homes, he added.