New administration will continue to tap into high-tech tools 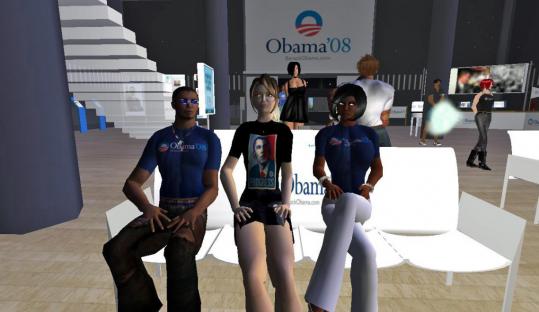 Barack Obama's campaign incorporated technology into the senator's bid for the White House, including setting up a virtual headquarters in SecondLife, an online world created by its users. (Second Life via Associated Press)
By Hiawatha Bray Globe Staff / November 11, 2008
Text size – +

If Obama gets his way, all Americans will have broadband Internet access, whether they live in big cities or remote villages. Online life will be safer, with better defenses against cybercriminals. And there will be greater access to government, with online services to let anyone question members of the president's Cabinet or track every dime of the federal budget.

Judging by the campaign's position paper on technology policy - calls and e-mails to the Obama transition team were not returned - the president-elect believes Internet technology should be as thoroughly integrated into federal agencies as it was in his campaign, where the Web was used to communicate, raise money, and get out the vote in a way that was unprecedented in US politics. A large Internet presence boosted his prodigious fund-raising, helping to collect a record-breaking $150 million in September alone, and such online innovations as the campaign's "Project Houdini," which tracked voters in real time on the day of the election, were the first of their kind. He is in the process of choosing the nation's first chief technology officer - a post that's long existed in most corporations, but never in government.

Phil Bond, a former undersecretary of commerce in George W. Bush's administration who now heads the industry lobbying group Information Technology Association of America, praised Obama's plan to bring online innovations to the federal government. Obama wants to put YouTube-like videos of government meetings online, so citizens can see their federal agencies at work, and has proposed a Google-like database of federal grants and contracts, so people can see where their money is going. And he'll require his Cabinet members to hold regular online town hall meetings, where they'll field questions from the Internet audience.

"His use of the technology in the campaign would imply a lot of positive things for government as well," said Bond. "I think we're going to see a lot of things we can't even imagine today, because they have a very open mind-set."

But before they can benefit from online government, many Americans must get online. The US ranks 15th out of 30 industrialized nations in the percentage of citizens with access to the Internet. Obama promises to make Internet access as commonplace as telephone service.

Obama has called for tax and loan incentives to spur construction of broadband networks. He wants to divert some of the $7 billion Universal Service Fund, collected by the federal government to subsidize phone service in rural areas, to build high-speed Internet lines that could also carry phone traffic. "You don't have to take that money out of budget," said Ben Scott, policy director of Free Press, a media reform organization that backs the idea. "It's basically already there." But Obama is bound to face resistance from rural phone companies.

He's also in for a fight on a proposal to reallocate licensed radio and TV frequencies to create new wireless broadband networks. Last week, the Federal Communications Commission approved the sale of wireless networking devices that will transmit over unused TV frequencies known as "white spaces."

Art Coviello, president of Bedford-based RSA, the data security division of EMC Corp., said the Bush administration drew up a sound cybersecurity plan, but failed to implement it. He's expecting better from an Obama administration. "He was the first presidential candidate who held a round table on national security that had cybersecurity as a priority," Coviello said.

But any comprehensive cybersecurity strategy must be international in scope, warned Tom Kellermann, vice president of security awareness at Core Security Technologies in Boston. "Many hackers use less-developed countries as bastions or havens for their acts," said Kellermann, adding it will take complex multinational negotiations to build global firewalls against online crime.

In an Obama administration, all Internet data would be treated equally. The president-elect is a staunch supporter of "net neutrality," the idea that Internet providers should be barred by law from discriminating against particular kinds of data. But there's intense debate over whether such a law is needed.

Earlier this year, Comcast Corp. admitted that it delayed the flow of data generated by the popular file-swapping program BitTorrent, used by many Internet users to trade in TV shows and movies, to ease congestion on its network. The FCC ordered a halt to the practice. Comcast has appealed to a federal court.

A federal net neutrality law would prohibit such restrictions by service providers, and has strong support from online activists worried about digital censorship. "That's been a key point of our agenda for some years," said Scott, of Free Press. But Adam Thierer, senior fellow at the libertarian-leaning think tank Progress & Freedom Foundation, said that a net neutrality law is unnecessary, and perhaps dangerous.

"It will allow the FCC to begin comprehensively regulating the broadband marketplace," he said, "including broadband speech."

An even nastier fight could await the new president if he sticks to his goal of attracting more high-tech workers from abroad. Obama favors an expansion of the H-1b visa program, used by US technology companies to import foreign workers for up to six years. But he ultimately hopes to create a comprehensive immigration reform plan.

Obama's plan would expand the number of permanent visas made available to skilled foreign workers and offer those who earn college degrees in the United States a chance to become citizens.