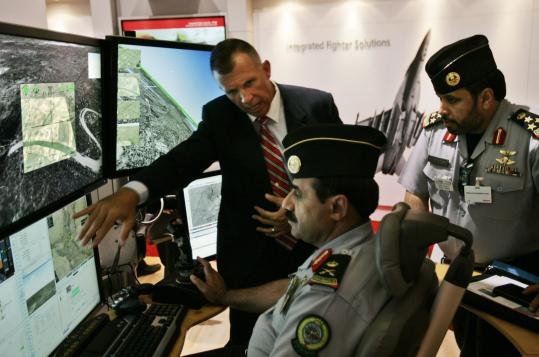 Mark Bigham (left) shows Raytheon's control system for unmanned aircraft. A key factor was making the system more intuitive - replacing keystrokes with a game console - on the theory that thumbs are the most accurate way to control a craft. (Lefteris Pitarakis/Associated Press)
Email|Print|Single Page| Text size – + By Associated Press / July 20, 2008

FARNBOROUGH, England - It looks like the ultimate new video game: The operator in the comfortable leather chair uses dexterous thumbs on a hand-held console to maneuver an aircraft, with its trajectory displayed on three large flat screens.

But the chair is for a qualified pilot and the landscape on the screen is downtown Baghdad, as defense contractor Raytheon Inc. provides a first look at its new control system for unmanned aerial vehicles, or UAVs.

The company says its Universal Control System, which uses some hardware from the gaming world, will shorten training time and help prevent crashes of expensive unmanned drone aircraft by providing a more interactive experience for the pilot.

"We wanted the human to get into a cockpit and feel they are stepping into the system," said Mark Bigham, director of business development, at the Farnborough International Airshow.

While older systems used only a keyboard, single screen, and joystick, a key factor for Raytheon was making the system more intuitive - replacing keystrokes with a game console - after consulting with experts and discovering that thumbs are the most energy-efficient and accurate way to control an aircraft.

The leather chair is adaptable to individual users, who can also control a heating and cooling duct above their head.

In a move away from what Bigham calls the "soda straw" view of most UAV pilots, the screens are augmented with digital images that provide a near 180-degree view.

Other data, such as the status of the craft and troop locations, is provided on a fourth screen, in much the same way that video games provide extra on-screen information on characters and ammunition levels.

Raytheon, of Waltham, Mass., wants to capitalize on the rapidly growing use of unmanned aerial vehicles in both military operations and civilian projects. The overall global market is expected to rise from $3.5 billion to some $55 billion in 10 years, according to Teal Group.

The war on terror has spurred the use of drones in combat areas, with unmanned aircraft currently flown by the US Air Force and the Royal Air Force in Iraq and Afghanistan.

BAE Systems PLC announced plans at Farnborough to work with Britain to develop an unmanned aircraft, known as Mantis, that can drop laser-guided bombs and fire missiles.

But increased use of drones has highlighted problems with control systems. A Predator drone crash in Iraq in 2006 was attributed to error by its pilot back in Nevada. Two more recent crashes involving RAF and US Air Force Predators this year were initially blamed on mechanical problems; full reports have not been published.

The Predators, built by General Atomics, are flown by pilots at a military base near Las Vegas. Primarily used for surveillance and reconnaissance, they can also be armed with missiles.

The Federal Aviation Administration says that over two-thirds of Predator UAV crashes are due to human error with the flight controls. With Predators worth more than $20 million each, that makes for a costly mistake.

"A lot of things are being attributed to pilot error that should be attributed to poor design," said Bigham, adding that Raytheon believes its system could reduce costs for the Air Force by about $500 million over a decade.

Raytheon hopes to develop the system so the console, and potentially the chair, vibrate to reflect the sensation of actual conditions, including turbulence and landing.

For now, Raytheon is focused on military applications. But the system can also be used for marine and civilian applications. US Customs and Border Protection is already operating four Predator drones over the Mexican border.