Stock tumbles after resignation, warning that sales are lagging 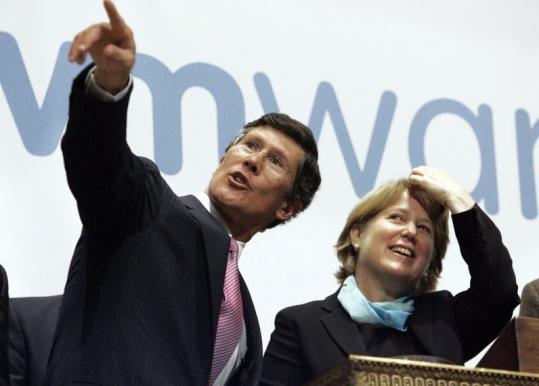 VMware Inc.'s board chairman, Joe Tucci, said he wanted company cofounder Diane Greene to stay on - but no longer as VMware's chief executive.

Greene's surprise resignation yesterday and a warning that VMware's 2008 revenues would fall short of previous estimates led to a sharp drop in the value of VMware stock.

Greene was replaced by Paul Maritz, founder of Pi Corp., a software firm EMC acquired this year. Maritz spent 14 years at Microsoft Corp., where he managed the development and marketing of Microsoft Office and several versions of the Windows operating system. He was one of Microsoft's five highest-ranking executives when he left in 2000.

Tucci said Maritz's experience has prepared him for running a large, fast-growing software company like VMware, of Palo Alto, Calif. "The board felt it was appropriate to bring in top leadership that has operated at this level before," he said.

VMware faces tough competition from Microsoft, which recently launched a product to challenge VMware's virtualization software. But, Maritz said, "I am not over-awed by competing against Microsoft. . . . They don't have any deep secret that no one else has. They just have very deep pockets."

Tucci, who is also EMC's chief executive, denied reports of friction between himself and Greene.

"I have a lot of respect for Diane. She's done a great job," he said. "We wanted her very badly to stay with the company in a different role, but a very significant role." But Tucci said Greene was unwilling to remain in any other job.

Tucci said he hopes that Greene's husband and VMware cofounder, Mendel Rosenblum, will stay on as VMware's chief scientist.

Frank Gillett at Forrester Research in Cambridge doubted that it was related to slowing growth at VMware. "This may be either about a personality thing or it's about plotting VMware's long-term success," he said, "because their short-term success looks just fine, frankly."

Brent Williams, an analyst at Benchmark Co. in New York, said Greene's management style might not be suited to such a big and rapidly growing company. "There are different skill sets needed to handle the organiza tional structure," he said.

VMware's products allow companies to run multiple operating systems on individual computers and to manage many computers as if they were a single powerful machine. The technology allows them to get more work out of their existing computers, reducing the need to purchase additional machines and lowering energy costs.

VMware has about 150 employees in Boston and last month said it would double the local workforce.

EMC bought the company for $635 million in 2004. Since then, it has been one of the software industry's biggest success stories. Revenue hit $1.33 billion last year, up 88 percent from the year before. Last year's sale of 10 percent of VMware's stock to the public was among the most successful public offerings of 2007. The shares, originally priced at $29, climbed as high as $125. Some EMC investors have urged the company to sell its remaining 86 percent stake in VMware, but a spokesman yesterday said that EMC has no plans to sell.

Recent challenges have brought VMware shares down to earth, though. Revenue for the fourth quarter of 2007 came in below expectations, and VMware officials said sales would grow by only 50 percent in 2008. Yesterday, the company said it now expects growth to be "modestly below" the 50 percent mark.

Meanwhile, Microsoft in June launched the finished version of its Hyper-V virtualization software, which is expected to become a major rival to VMware's.

Williams said investors are overreacting to the threat of competition from Microsoft. He said large companies that use virtualization software have embraced VMware, and it will take years before Microsoft can make significant inroads.

Still, worries about competition and slowing growth had driven VMware shares below $60 even before yesterday's news. Greene's departure and the revenue warning hammered the company's shares, as well as those of EMC. VMware closed at $40.19, down $13 or 24 percent, while EMC lost $1.75 or 11.5 percent, to close at $13.39.