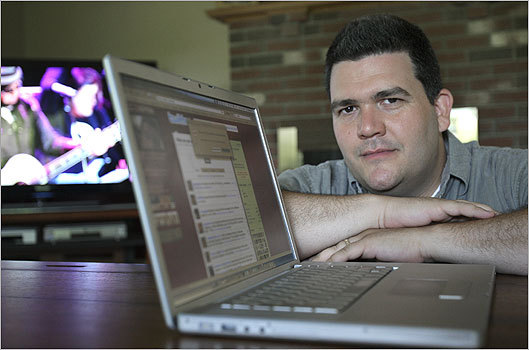 (Suzanne Kreiter/Globe Staff) C.C. Chapman posted a complaint about a technical problem he had involving his new television and Comcast cable service on the website Twitter. Within minutes, he got a response from Comcast.

Hurry up, the customer has a complaint

As blogs expand the reach of a single voice, firms monitor the Internet looking for the dissatisfied

When C.C. Chapman noticed a blemish in his high-definition television's reception during the NBA playoffs recently, he blasted a quick gripe about Comcast into the online ether, using the social network Twitter.

Minutes later, a Twitter user named ComcastCares responded, and within 24 hours, a technician was at Chapman's house in Milford to fix the problem.

"I was so floored," said Chapman, who runs a digital marketing agency and advises companies to do what he experienced with Comcast - listen to what customers are saying about them online and respond. "When it actually happened to me, it blew me away," he said. "Now I have a case study."

Chapman's experience is one example of the ways customer service is changing in an age when a single disgruntled consumer with a broadband connection can ignite a crisis. It also shows the potential of the Internet to turn miffed customers into fans in a more organic way than an advertising campaign. Chapman, for example, made a podcast about his visit from Comcast.

"We're in a world where one person, by their actions, can make a company look bad, and it can get echoed and amplified over and over again," said Josh Bernoff, an analyst at Forrester Research and coauthor of "Groundswell," a book about business and social technologies. "The power has shifted, [so] that big companies now have to be worried about one individual with a microphone called a blog."

Comcast, like other companies, has learned the power of the individual firsthand.

Two years ago, a YouTube video of a technician who fell asleep on a customer's couch while on hold with Comcast became a hit - the video has been viewed 1.2 million times and triggered more than 750 comments. Last summer, a 75-year-old Virginia woman frustrated with the company attracted national attention when she stormed into a Comcast office and began hammering equipment. Then there is ComcastMustDie.com, a website started last year by Advertising Age columnist Bob Garfield.

And even though those individual complaints represent a tiny portion of the cable operator's more than 24 million cable customers nationwide, in the latest ratings by the American Customer Satisfaction Index, Comcast hit an all-time low - in an industry that consistently ranks near the bottom of satisfaction rankings.

Comcast has made efforts to improve its customer service, investing in new software that allows representatives in call centers to be better informed about what products are functioning or broken. It has added call centers, and acknowledged that recent expansions - through acquisitions of other companies - can come with bumps for customers adjusting to new products and rates.

Comcast has also set up teams of employees who are encouraged to click around social networks or online forums.

"Listening and acting upon what they are hearing and being very proactive - which is different than waiting for a customer to pick up the phone and call us. We can nip it in the bud," said Karen Hartzell, division vice president of customer care for Comcast's NorthCentral division.

Other companies are moving in the same direction.

At Southwest Airlines, the social media team includes a chief Twitter officer who tracks Twitter comments and monitors a Facebook group, an online representative who fact checks and interacts with bloggers, and another who takes charge of the company's presence on sites such as YouTube, Flickr, and LinkedIn. So if someone posts a complaint in cyberspace, the company can respond in a personal way.

For example, when Travis Johnson, known by the Twitter handle, "pastortrav," complained recently about Southwest's check-in process, he received a quick, public response from an airline employee saying, "So sorry to hear it! What don't you like about the check-in process? Did your flight get off okay?"

"We monitor those channels because we know these conversations are taking place there, and we can either watch the conversations or take part in them," said Southwest spokeswoman Christi Day.

Even companies that haven't deployed employees as website ambassadors are checking on how they are represented in online chatter.

Firms like TNS Media Intelligence Cymfony in Watertown monitor how brands are perceived online, by tracking blogs and social networks to find where people are talking about a company.

"Why do people post negative stuff about brands and companies online? A lot is they want to help the company," said Jim Nail, chief marketing officer of Cymfony. "Yeah, they're upset; yeah, they're angry; yeah, they feel like they've been treated unfairly - but they want to give the company a chance to fix it."

Dell Inc. has been a leader in this sort of unconventional outreach. The company was burned by "Dell Hell," blogger Jeff Jarvis's 2005 account of his negative experience with the company.

In the years since, Dell said, it has aggressively worked to improve customer service, including by listening online.

The company's 40-member "communities and conversation team" includes employees that do outreach on Twitter and communicate with bloggers.

At DellIdeaStorm.com, a social website that the company launched in 2007, people are invited to make suggestions for products and services. Of more than 9,000 suggestions, 50 have been implemented, the company said.

The Society for New Communications Research recognized the Dell Outlet, which sells refurbished products, for using Twitter to offer special deals and products. The outlet has sold $500,000 worth of products through Twitter offers.

It's not just an early warning system, said Dell spokeswoman Caroline Dietz. "If you look at the more positive side, it's also about innovation - the closer you are to your customers via these social media tools, you can listen to what are their needs, what are their pain-points, and act on that feedback."