A tussle to sign up talent in Kendall Sq. 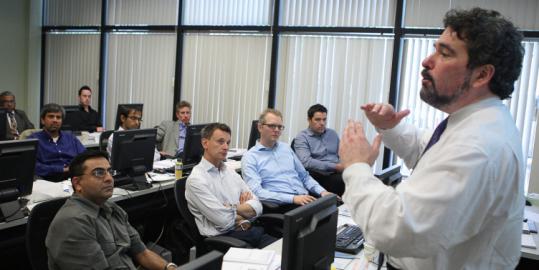 CAMBRIDGE - Since the heyday of Lotus Development Corp. in the 1980s, local high-tech companies have had easy access to the brightest job candidates in Kendall Square, home to MIT and its world-class labs.

But now they face increasing competition for talent from out-of-state giants that have set up shop in the technology hub on the Charles River.

Microsoft Corp. and Google Inc. recently opened new offices in the square. VMware Inc., a leader in the hot field of virtualization software, is perched upstairs from Google. Yahoo Inc. gained an outpost next door when it acquired broadband video startup Maven Networks. And International Business Machines Corp., the high-tech powerhouse that bought Lotus in 1995, has a research operation just down the road.

Together, the companies now have hundreds of employees in Kendall Square.

"It's always been competitive here, and it's gotten more competitive," said Alan Trefler, founder and chief executive of Pegasystems Inc., a business software company based in Kendall Square. "Some of these firms have got tremendous cachet."

Yishai Knobel, 29, an Israeli who graduated this month from the Massachusetts Institute of Technology's Sloan School of Management, opted for a job at Microsoft's office on Memorial Drive. "It's a big company where I can learn a lot. That definitely adds to the appeal," Knobel said. "I can tell my grandmother that I'm working for Microsoft, and I don't have to explain what it is."

While they resist airing their concerns publicly, local entrepreneurs grumble privately that the "branch offices" have been poaching their talent in what's become a tight labor market for software developers, engineers, programmers, and high-tech researchers.

Demand for such workers has increased even as the broader economy has slowed because they bring skills that are vital to growing businesses.

That has prompted local companies to look for ways to maintain an edge over the outsiders in recruiting. For example, Tim Rowe, chief executive of Cambridge Innovation Center, said some tech companies that lease shared space there have told him they would be willing to pay for catered meals.

"They want us to do anything we can do to make it better for their employees," Rowe said, noting that Google and others offer free gourmet meals and game rooms. "There's a fight for talent out there, and everyone wants to make the work environment more attractive."

But Trefler said local companies can promise something outsiders can't: Access to decision makers and the ability to have greater impact as an individual. That would not be true, he said, for local employees of Google or Yahoo, based in California's Silicon Valley; Microsoft, based in Redmond, Wash.; or IBM, based in Armonk, N.Y.

"As fun as it may be to say at a cocktail party that you work for Google, there's no expectation that your work for an out-of-state company will be visible," he said.

Still, technology companies headquartered in Cambridge have become more aggressive in their recruiting at a time when they and larger out-of-state larger rivals are expanding their local staffs.

Trefler and other senior executives at Pegasystems get personally involved in wooing talented employees, even sharing demos of its proprietary new software - which allows companies to customize operations - with promising candidates. Pegasystems has hired more than 40 people at its Cambridge headquarters so far this year, boosting employment to over 300.

Akamai Technologies Inc., a Kendall Square company that hosts Internet content for other businesses globally and has its own offices around the world, has been advertising for open positions in the square's MBTA station on the Red Line, through which hundreds of high-tech employees pass on their daily commutes.

"This is a competitive neighborhood," said Paul Sagan, president and chief executive of Akamai, which has added nearly 100 employees in Cambridge so far this year and expects to hire another 100 to 200 by year end. "Kendall Square has that ecosystem of fresh recruits every year and great companies looking for them. We compete with the most interesting names, both established companies and startups."

The company has quietly built up a staff of 150 in Kendall Square over the past three years, and it plans to double that over time.

"We really have a lot of cool projects happening right in our Cambridge office, not just add-ons to things that are happening in California," said Austin. "The people we hire want to be where the action is."

Lexington native Jim Kavo, a 35-year-old software product manager, made a different decision when looking for a new job earlier this year. After talking to Yahoo, he accepted a position at Cambridge-based Pegasystems, a much smaller company.

"This is a great situation," Kavo said. "I have a direct pipeline into the product direction. I've been here a couple of months, and I've already been in a half-dozen meetings where I'm presenting ideas to the CEO and getting his buy-in. I'm sort of in the main control room here."