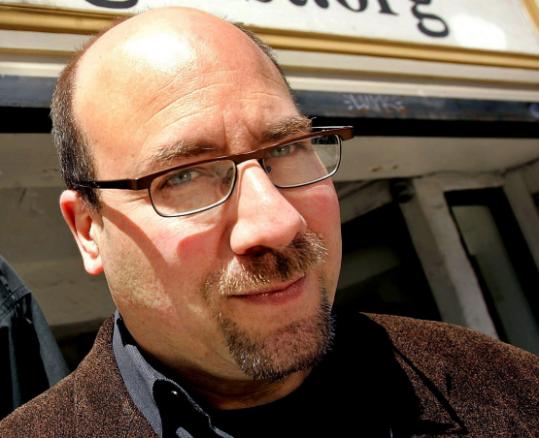 Craig Newmark didn't start Craigslist as a business, but it has grown into one. (Jeff Chiu/file 2005/associated press)
Email|Print|Single Page| Text size – + By Scott Kirsner June 15, 2008

Craig Newmark was tapping away at the keys of his Lenovo laptop in a hotel conference room in Waltham, dealing with problems on his website. He scrubs racist comments from its discussion boards and hounds New York City realtors who post apartments for rent that don't exist. And he's incredibly efficient at it: An e-mail I'd sent to him got a reply in less than three minutes.

Newmark, who is customer service representative and founder of Craigslist Inc., didn't start the website as a business, but it has grown into an utterly unusual one. With just 25 employees in San Francisco, the deliberately spartan site operates in 450 cities around the world and is expected to bring in $81 million in revenue this year, according to the analyst firm Classified Intelligence LLC, despite charging its users for almost nothing. According to the ranking service Alexa, Craigslist is the seventh most-visited US website, just ahead of Amazon.com.

On his recent visit to Boston, the second city where Craigslist launched, in 2000, I had a chance to chat with Newmark and then interview him onstage in front of an audience. Newmark has the brainy, self-deprecating wit of the young Woody Allen; he's a nebbish who knows how to crank out software code.

We talked about the company's unorthodox approach to business, his plans for the future, and his interest in how journalism can be reinvigorated online. And I tried to get him to talk about Craigslist's on-going legal tussle with eBay Inc., which owns 28 percent of the company.

Anyone who has sold an old sofa, found a summer sublet, or hired a carpenter on Craigslist knows about the site's culture. People are generally honest. They show up when they say they're going to show up. They like when you post pictures of things you're trying to sell, and they pay in cash. Things happen fast - an unneeded microwave posted at lunchtime on Saturday may be sold before nightfall. The only listings that carry a fee are apartment listings in New York ($10), and job listings in 11 cities, including Boston ($25 to $75).

Craigslist got its start while Newmark was working as an Internet evangelist at Charles Schwab. It was originally a list of Bay area happenings, sent via e-mail to his friends.

Craigslist was a volunteer effort until 1999, when it became a company with employees and payroll. Newmark hired Jim Buckmaster to help handle the site's technology, and Buckmaster soon became the chief executive. (Buckmaster landed the job after he posted his resume - where else? - on Craigslist.) "I realized my massive limitations as a manager," Newmark says. Now, Newmark answers e-mails and helps police the site.

Since the company never took venture capital and grew only as fast as revenues would allow Craigslist has managed to maintain the feeling of a bulletin board on the town common. Other entrepreneurs sometimes ask Newmark and Buckmaster why they don't charge money for more kinds of listings, or raise prices, or pepper the site's pages with a few banner ads.

"They're one of the very few companies in the world that could raise its prices with impunity," says Peter Zollman, founding principal of Classified Intelligence. He says Craigslist is a for-profit business "run like a nonprofit."

But Newmark says users - the constituency he's most loyal to - don't care about Craigslist making more money. "There's nothing noble or altruistic or pious about what we're doing," he says. "Once you make enough money and provide for your future, it's more satisfying to change the world a little bit."

And cashing out by selling the company is out of the question. "Jim and I know some of these really rich guys," he says. "They're not happier than anyone we know. So what's the point?"

But legal wrangling with eBay could bring some changes. In 2004, eBay bought a stake in Craigslist from a former employee and later started a competitive classifieds service of its own called Kijiji.

Now eBay is suing Craigslist, alleging it has tried to dilute eBay's position in Craigslist, and Craigslist is countersuing. Among its claims are unfair competition and false advertising; Craigslist asserts that eBay illegally used the term "Craigslist" when it advertised Kijiji on Google's search results pages.

In the past year, according to the suits, eBay indicated its interest in buying the part of Craigslist it doesn't own, and Craigslist said it wanted to buy back eBay's shares. "If a judge requires that eBay sell its shares back, Craigslist may have to get some cash to pay for the shares - and valuation would be a question," says Zollman, suggesting eBay's position is likely worth hundreds of millions. One possibility, he adds, is trying to wring more revenue from the site.

Craigslist is facing an increasing amount of competition - not just from eBay, but from Oodle.com, another Silicon Valley company that recently partnered with Wal-Mart to promote its listings aggregation service.

Craigslist is legendarily slow to change or add new features, which some view as a good thing. But searching across multiple cities is impossible, and Newmark admits that using the site on a mobile device isn't easy.

Michael Rappa says, "That opens the door for other entrepreneurs to come in" and offer features or services that Craigslist doesn't - like adding a rating or reputation system for buyers and sellers. Rappa is a professor at North Carolina State University who has written an online case study of Craigslist.

Craigslist is often characterized as an assassin of newspapers, spiriting away their classified advertising revenues.

But Newmark says that specialized job, real estate, and cars sites have had much more of an impact, since they have sales forces paid to pursue newspaper advertisers. (They also sometimes chase Craigslist's advertisers. "I've called salesmen, letting them know that this might not be OK," Newmark says.)

"Has Craigslist caused newspapers pain? Yes. It's called capitalism," Zollman says. "They came along with a better mousetrap, and people started using it."

Among the organizations he supplies with moral or financial support are the Sunlight Foundation, which aims to improve access to congressional information; NewAssignment.net, which promotes "open source" reporting; and ProPublica, which is building a team of investigative journalists.

Newmark, 55, says he doesn't have any plans to leave Craigslist, retire, or cash out. "Craigslist could do fine without me," he says, but adds that he has no interest in doing another start-up.

He sometimes quips that "death is my exit strategy." When I asked him about that, he responded by e-mail: "I'll be doing significant customer service only as long as I live. After that, it's over. . . or is it?"