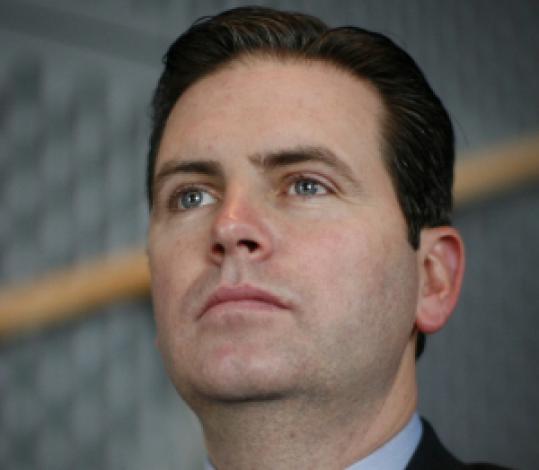 Boston's ambitious push to provide citywide wireless Internet access is faltering: Fund-raising is millions of dollars short, the volunteer heading the project may step down, and plans for universal coverage are being scaled back and delayed.

The group leading the effort acknowledges that it has raised only "hundreds of thousands" of dollars instead of the nearly $15 million it sought. And unlike its initial pilot project, which blankets the Grove Hall neighborhood, the next phase will target only portions of the Fenway and Mission Hill.

City leaders insisted they aren't backing away from their ultimate goal of Wi-Fi in every corner of Boston. Instead, they said, they're adjusting their expectations and abandoning their original timetable - which promised citywide access by 2008 - to refocus on a series of neighborhood "bubbles" that test technology and business models.

"We still have very ambitious plans to move this across the whole city," said Bill Oates, the city's chief information officer. "But we're not sure how long it's going to take or what the technology model is going to be. We're learning that we have to take it one step at a time."

But Councilor John M. Tobin, who began advocating for universal Wi-Fi in 2004, yesterday criticized the pace and direction of the Boston effort. "I'm disappointed it's taking so long," Tobin said. "We started this process four years ago, and I would have thought we'd be farther along. The goal was to have a ubiquitous model across the city and an equitable playing field. We're leaving people behind."

The challenges in Boston parallel those in dozens of other cities across the United States and abroad that are grappling with technology glitches and higher-than-expected costs in launching public Wi-Fi, or wireless fidelity, networks. The networks are meant to enable people with laptops, handheld computers, cellphones, music players, and other devices to connect to the Internet cheaply via radio waves.

Boston's next neighborhood pilot project will be scaled back from its initial effort, which offers universal coverage for the Grove Hall neighborhood, straddling Roxbury and Dorchester, but was completed nine months behind schedule and required more than 60 broadband routers, many more than anticipated. Routers act as radios transmitting the signal that connects users to the Internet.

In the next phase, the city will experiment with a simpler and cheaper new technology design, called "mesh networking," that will beam wireless signals from a central access point in the Fenway only to nearby parts of the Fenway and Mission Hill neighborhoods.

"We're not taking a full neighborhood approach in the Fenway and Mission Hill because of our experience in Grove Hall," said Pamela Reeve, chief executive of OpenAirBoston, the nonprofit corporation established by the city to manage the Wi-Fi program. "The approach for this pilot is not to cover a neighborhood but to test a technology."

Officials of OpenAirBoston also said they've raised only hundreds of thousands of dollars - mostly in donated equipment and services - from business and foundations to fund the Wi-Fi buildout. That's far below their original $16 million to $20 million fund-raising target, which was pruned last fall to between $12 million and $15 million.

OpenAirBoston is working on both pricing and design issues. Wi-Fi connectivity in Grove Hall, which has been accessed for free by more than 3,300 residents since testing of the network began last summer, for example, will cost $9.95 a month starting in mid-April. And, while the Grove Hall pilot deployed proprietary hardware and software provided by BelAir Networks, the Fenway and Mission Hall pilot will use free "open source" software installed on off-the-shelf hardware.

Organizational changes may also be in store for the Wi-Fi program. Reeve, a veteran high-tech executive who has served for the past 20 months as volunteer chief executive of OpenAirBoston, hinted she may be stepping down in favor of a full-time director. "My belief is we need to get some long-term staffing into OpenAirBoston," she said. City officials are discussing how the job would be filled and funded.

While millions already have Wi-Fi access in their homes and businesses, municipalities across the country want to make it available in public spaces and to low-income residents who can't afford to buy high-speed service from phone or cable companies. They also want to use their networks to improve the efficiency of city services, like paying fees or parking tickets, and of city employees from police officers to meter maids.

But progress has stalled in Philadelphia, San Francisco, Chicago, Houston, and elsewhere as private Internet providers, such as Earthlink, have pulled out of agreements to build city networks because they were no longer seen as profitable. Smaller cities, like Portland, Ore., and Tempe, have had to curtail some Wi-Fi services.

Boston may be better off in the long run because it created a nonprofit to build its network rather than relying on a commercial Internet provider, suggested Michael Oh, chief executive of Apple reseller Tech SuperPowers in Boston and a member of the task force that drew up the city's wireless plan. "Our model lets the city try to find the answer to these technical questions before it goes too far down the road of spending millions of dollars of other people's money," Oh said.

Still, the plan to limit connectivity in the second pilot has raised alarm in some quarters. "I have concerns regarding the gap in service," said Boston City Councilor Michael P. Ross, whose district includes Mission Hill and the Fenway. "I want to know how pervasive the gap will be and how long it will last. This technology is tomorrow's railroad and highway. If any city in America should have it down pat, it's Boston."

City officials said it remains to be seen how many blocks will get broadband coverage in the Fenway and Mission Hill. Plans now call for about 25 routers there - less than half the number installed on light poles and buildings in Grove Hall - and a networking design that routes wireless signals from one router to another. More routers could be added later.

By contrast, the Grove Hall network uses five larger routers to collect the signals from each of 59 nodes and transmit them to a pair of central access points connected to the Internet. Installers had to add about a dozen routers there last year to overcome signal disruptions caused by trees and buildings.