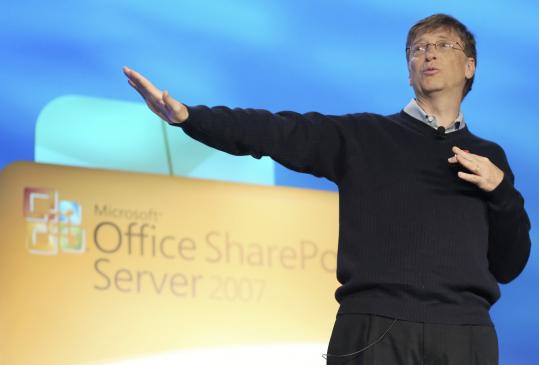 The company began testing online editions of its Exchange and SharePoint Server for companies with fewer than 5,000 employees yesterday, senior vice president Chris Capossela said in an interview. Blockbuster Inc. and Coca-Cola Enterprises Inc. are already customers for a service designed for larger companies, he said.

As many as half of Microsoft's customers for the e-mail and information-sharing software may use the Web-based versions in five years, making them a business worth billions, Capossela said. Microsoft, which bid $44.6 billion last month for Yahoo Inc., is competing with Google and International Business Machines Corp. for the attention of chief information officers who want to trim their technology costs.

Unlike traditional programs, Microsoft delivers the Web-based versions from a string of top-secret data centers.

The market for Internet-based software will grow to $14.8 billion by 2011 from $3.7 billion in 2006, said Erin TenWolde, an analyst at Framingham-based researcher IDC.

Google, the most popular Internet search engine, is also expanding its network of data centers to support new applications for e-mail and document sharing. Though IBM is Microsoft's biggest rival in that market today, Google may pose a larger threat in the future, Capossela said.

While the products released yesterday compete with Google's business programs, Microsoft's bid for Yahoo reflects its aim of catching up with Mountain View, Calif.-based Google in online advertising and Internet searches.

"In terms of Google, not to overstate it, but they really don't understand the needs of business," Chairman Bill Gates said yesterday. "For most Google products, the day they announce them is their best day."