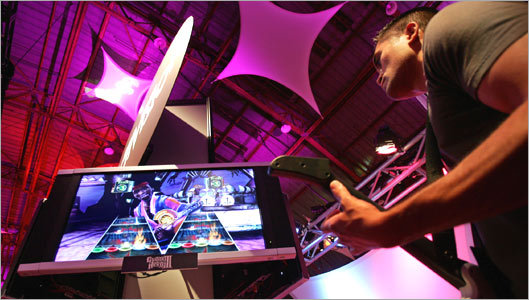 It's shaping up as a blue Christmas for some fans of the popular videogame Rock Band.

Game maker Harmonix Music Systems Inc. of Cambridge and distributor Electronic Arts Inc. are scrambling to satisfy customers angry about defects in many of the guitar-shaped game controllers that come with Rock Band. There's also a shortage of these controllers, making it difficult for players to create the four-piece band promised by the gaming software.

Many gamers were hoping they could use controllers created for the game Guitar Hero III - a rival program from Activision Inc. that's based on technology invented by Harmonix. They can, if they're using Microsoft Corp.'s Xbox 360 game machine, but not if they've got Sony Corp.'s PlayStation 3 videogame console.

Harmonix wants to fix this with a software patch to make the PS 3 version of Rock Band work with the Guitar Hero III controller. About 68,000 copies of Rock Band have been sold for the PS 3, while the PS 3 version of Guitar Hero III has sold over 247,000 copies. Many PS 3 owners have purchased both games, and want to use the same controllers with either one. But Activision has refused to allow the necessary modifications, unless Harmonix and its owner MTV Networks pay for the privilege.

Gaming fans are responding with the kind of bitterness that attended the breakup of the Beatles. "If this doesn't get worked out, I'm not going to deal with Harmonix, Activision, EA, or MTV ever again," said Chris McBain, 44, a storage facility manager in San Jacinto, Calif. McBain has had two Rock Band guitars die on him. Since he also owned a copy of Guitar Hero III, he assumed he could use that game's controllers to play Rock Band.

But because McBain bought Sony's PS 3, his Guitar Hero controllers refuse to cooperate. Harmonix published a software patch on the Internet to fix the incompatibility problem. But Activision successfully demanded withdrawal of the patch, and is insisting on financial compensation before such a patch can be issued. "It's been such a disappointment," McBain said. Preston McCauley, 30, a website designer in Irving, Texas, is equally irritated. It took him 20 days to get a replacement for his defective Rock Band guitar, and he couldn't use the Guitar Hero controller in the meantime. Neither can he use it as the bass guitar in a four-piece combo. "It's kind of ridiculous," said McCauley. "I play both games. I think I should be able to use any controller." Other PS 3 games use standard PS 3 controllers, which are made by Sony and a variety of other companies. Players don't usually need different controllers to play different games on the same console.

Activision spokeswoman Maryanne Lataif said her company was willing to work with Harmonix to make the various game controllers fully compatible with one another. "Unfortunately for Rock Band users, Harmonix has been unwilling to discuss an agreement that will allow us to provide that option in a manner that maintains the high standards people have come to expect from Activision," Lataif said.

She added that any agreement will involve someone at Harmonix writing a check. "We believe we should be compensated for the use of our technology," said Lataif.

Saltonstall also said that Harmonix, MTV, and EA are working hard to put stand-alone Rock Band controllers onto store shelves. "We have 7,000 people in China manufacturing guitars for us," she said. "They're on their way." The controllers are expected to go on sale next month. Saltonstall said that Harmonix launched Rock Band before it had enough guitar controllers to go around, to get the game into stores in time for Christmas.

There's no question which game is winning the battle of the bands. Guitar Hero III, priced at $100, sold 1.9 million units in November alone, and 3.3 million since its debut in October, according to game industry trackers at the NPD Group. By contrast, the $170 Rock Band sold just 382,000 units in November, its first month on the market.

One reason for Guitar Hero's huge lead is that it works with Sony's PlayStation 2, still the world's most popular home videogame console. About 45 percent of the Guitar Hero III games sold so far have been for the PS 2. This week, Harmonix launched a PS 2 version of Rock Band, and the company said that the game is playable with the PS 2 controller for Guitar Hero III.

Billy Pidgeon, game industry analyst for IDC Corp. in New York, said that Activision may be entitled to compensation from Harmonix. But he added that Activision's hard line could backfire by alienating gamers.