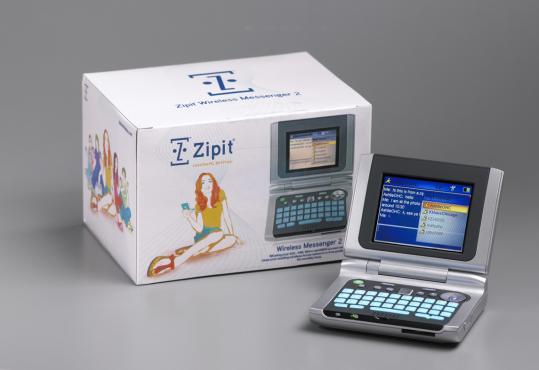 NEW YORK - A small South Carolina company says it has a cure for the modern plague of budget-busting cellphone charges racked up by teenagers: a gadget for text messaging that isn't a cellphone.

Zipit Wireless Inc. plans to disclose today that it will make available a text-messaging plan for its Zipit Wireless Messenger 2, a device the size of fat wallet that uses WiFi hotspots to do free instant messaging with AOL Instant Messenger, Yahoo Messenger, and Windows Live Messenger.

Zipit users who sign up for a text-messaging plan will now be able to contact cellphone users, as well as communicate by instant message.

The plan will cost $4.99 for up to 3,000 messages per month when it's formally launched in February. Between Dec. 20 and the launch, text messaging is free on the device.

Cellphone carriers typically charge 10 or 15 cents per text message, or $15 a month to add 1,500 or "unlimited" text messages to a calling plan.

The service costs almost nothing to provide, making it "one of the most profitable applications known to man," said Morgan Stanley's telecommunications analyst, Simon Flannery.

The Zipit 2 itself costs $149.99. It has a color screen and was launched in November as a follow-up to the monochrome original Zipit, which came out in 2004.

The Zipit 2 will be able to receive as well as send text messages. But unlike a cellphone, the Zipit won't accept text messages from numbers that haven't been added to an approved list by the user, which should make it immune to spam sent as text messages.

Unlike a cellphone, it won't be able to send text messages to more than one recipient at a time.

The Zipit belongs to a small category of devices that are designed to capitalize on the craze for instant messaging by making it available off the computer. Sony Corp.'s Mylo device, which was aimed at the college-aged, is another example.

Neither the Zipit nor the Mylo has found audiences as big as instant messaging has generally. Frank Greer, chief executive of Greenville, S.C.-based Zipit Wireless, said "tens of thousands" of the original Zipits have been sold, though he would not provide sales figures.

The relatively slow pace of sales probably is due to the difficulty of marketing a wireless messaging device to people who already have one - the cellphone. Both the Zipit and the Mylo also need to be in a WiFi hotspot to function.

But Zipit 2's text-messaging feature - which can be added through a downloaded software update - will help close the gap with cellphones.