Girl's suicide after online chats leaves a town in shock 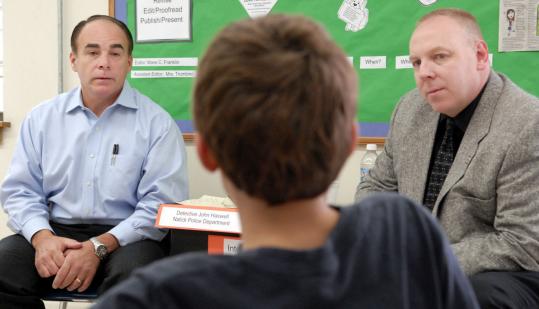 DARDENNE PRAIRIE, Mo. - For nearly a year, the families who live along Waterford Crystal Drive in this bedroom community northwest of St. Louis have kept the secret about the boy Megan Meier met in September 2006 on the social networking site MySpace.

He called himself Josh Evans, and he and 13-year-old Megan struck up an online friendship that lasted several weeks. Then the boy abruptly turned on Megan and ended it. That night, Megan, who previously had battled depression, committed suicide.

The secret was revealed six weeks later: Neighbor mother Lori Drew had pretended to be 16-year-old "Josh" to gain the trust of Megan, who had been fighting with Drew's daughter, according to police records and Megan's parents.

After their daughter's death, Tina and Ron Meier begged their other neighbors to keep the story private. Let the local police and the FBI conduct their investigations in privacy, they pleaded.

But after waiting for criminal charges to be filed against Drew, neighbors learned that local and federal prosecutors could not find an applicable statute.

Furious neighbors - and in the wake of recent media reports, an outraged public - are taking matters into their own hands.

In an outburst of virtual vigilantism, readers of blogs such as RottenNeighbor.com and hitsusa.com have listed the Drews' home address, personal phone numbers, e-mail addresses, and photos.

Dozens of people allegedly have called businesses that work with the Drew family's advertising booklet company and flooded the phone lines at the local Burlington Coat Factory, where Curt Drew reportedly works.

"I posted that - where Curt works. I'm not ashamed to admit that," said Trever Buckles, 40, whose two teenage boys grew up with Megan. "Why? Because there's never been any sense of remorse or public apology from the Drews, no 'maybe we made a mistake.' "

Local teenagers and residents protest steps from their tiny porch. A fake 911 call, claiming a man had been shot inside the Drew home, sent police to surround the one-story house. People drive by in the night, screaming "Murderer!"

The Drews, who have installed cameras to track neighbors' movements, declined to comment.

Cyber-bullying has become an increasingly creepy reality, where the anonymity of video games, message boards, and other online forums offers an outlet for taunts. Yet drawing the line between conduct that is illegal and constitutionally protected free speech can be difficult.

Parry Aftab, an Internet privacy lawyer and executive director of WiredSafety.org, points to one federal statute that might apply in the Meier case: the telecommunications harassment law. It prohibits people from anonymously using the Internet with the intent to annoy, abuse, threaten, or harass. Terri Dougherty, spokeswoman for the US attorney in St. Louis, declined to comment.

The city's board of aldermen unanimously passed a law that makes cyber-harassment a misdemeanor, with a maximum of 90 days in jail, a $500 fine, or both for each violation. It's the most stringent punishment available to the city.

"We're all in shock," Mayor Pam Fogarty said. "If I have anything to say about it, we'll never have our hands tied legally like this again."

Dardenne Prairie is an upper-middle-class enclave of about 7,400 people. Over the years, the flat expanse of farmland has been taken over by subdivisions, bistros, and strip-mall cafes.

Megan befriended Lori and Curt Drew's daughter in elementary school, and the two became close, Meier said. When Megan transferred to a different middle school last fall, to help her deal with her depression and get away from some bullies, the two girls grew apart, her parents said.

Around the same time, Megan started to use the Internet, under the supervision of her parents. The eighth-grader browsed through her friends' websites and chatted about school. When a boy messaged Megan on MySpace and asked to be friends, the girl excitedly agreed. The two talked online for about six weeks.

In October 2006, Josh told Megan he had heard she was a terrible friend. The two fought. Tina, who had to leave to take Megan's younger sister, Allison, to a doctor's appointment, ordered Megan to get off the computer.

The messages grew nasty, according to an FBI transcript. The final message isn't included in the transcript: "I remember it said something like, 'The world would be a better off place without you,' " said Ron Meier, 37, who works as a machinist.

That evening, as her parents were downstairs preparing for dinner, Megan wrapped a cloth cord around her neck and hanged herself in her closet. She died the following day.

In the weeks that followed, the Drews comforted the Meiers. They said nothing to them about the fake MySpace account.

They prayed at the wake and consoled sobbing community members at Megan's funeral. They invited the Meiers to birthday parties and had Allison over to bake holiday cookies. They asked the Meiers to help hide Christmas gifts in their garage, far from their own children's prying eyes.

Last Thanksgiving weekend, the Meiers learned the truth from a neighbor who had figured out that Lori Drew had conducted the online relationship with Megan. In a fit of rage, they hacked up one of the gifts they were storing - a foosball table - with an ax and sledgehammer. They dumped the pieces onto the Drews' driveway.

"I heard this god-awful screaming," said neighbor Kristie Kriss, 48. "It was Tina. When I heard what happened, I couldn't believe it."

Days later, when the Drews complained to the police about the loss of their foosball table, the truth became public.

According to a police report, Lori Drew said she "instigated and monitored" a fake account before Megan's suicide "for the sole purpose of communicating" with the girl.

The Meiers hired an attorney.

"We told our friends to trust the system and we would have our justice," said Ron Meier.

The neighborhood might have agreed to stay mum, but they couldn't keep their feelings hidden: Many people shunned the Drews, meeting their gaze with sneers and obscene gestures.

On the anniversary of Megan's death, Ron's relatives lined the street with balloons and put up signs that asked for "justice for Megan."

Meanwhile, the Meiers' marriage fell apart. Tina moved out this spring and lives with her mother. The couple is getting divorced. Allison, now 11, splits her time between the two.

Ron remained in the house on Waterford Crystal Drive and kept Megan's room exactly as it was before the suicide. Her clothes fill the closet. But he's stopped sleeping there.

His attorney has suggested that he spend the nights with friends or family, because "if something does happen to the Drews, I'm going to be the number one suspect and I'll need a witness to prove my innocence," Ron said.

"All we feel is frustration, anger," Kriss said. "For months, we've been asking ourselves, 'What mother in her right mind would do this? And why won't the cops do anything to punish them?'

"We just want them gone."