Microsoft, Ford team up on voice controls for drivers 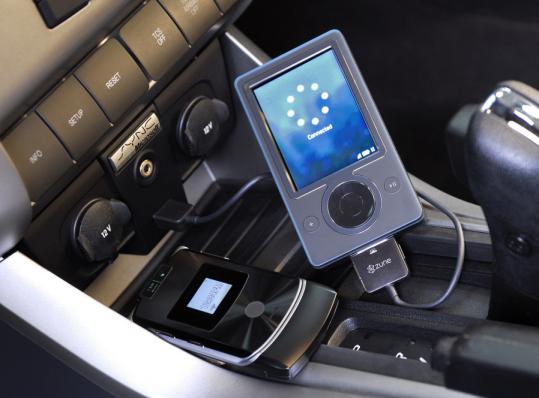 Not content with putting its software on nearly every personal computer in the world, Microsoft Corp. wants to boot up our cars.

The world's biggest software maker has teamed up with Ford Motor Co. to create Sync, a technology platform that uses voice commands and Bluetooth wireless technology to give users voice-activated control of their cellphones and portable music players.

Luxury cars have had similar features for years. But Sync is available as a $400 option on 12 Ford, Lincoln, and Mercury models, including some of their cheapest cars.

In the 1990s, Microsoft and chip maker Intel Corp. helped make desktop computers common by driving down the prices. Now, the Microsoft-Ford-Continental alliance hopes to do the same for "telematics" devices, which bring advanced electronic features to cars.

"This is not a new technology," said Ford spokesman Mark Schirmer. "I think what we're bringing to the party is wider availability, more affordability, and the fact that you can buy it in a Ford Focus," the company's least expensive model.

Ford's Sync package uses an electronics module designed by Continental AG of Germany, to run a version of Microsoft's Windows operating system tailored for automotive use. It also features voice-recognition software developed by Nuance Communications Inc., of Burlington. The system uses both a Bluetooth radio system and a USB connector for plugging in devices like the Microsoft Zune or Apple iPod music players, neither of which are Bluetooth-compatible.

Because cellphone companies sometimes set limits on the functionality of their Bluetooth phones, not every phone is compatible with Sync. Ford provides its customers with a list of approved phones, and Microsoft senior product manager Velle Kolde said the list is constantly growing. "If you have a Bluetooth-enabled phone, pretty good chance it's just going to work," Kolde said.

Once the phone is connected to Sync, the user can download his phone's address book to the car's onboard memory. He can also dial up friends and colleagues by issuing voice commands like "dial Boston Globe." If the Bluetooth phone is also a music player, he can ask for a favorite tune by name.

The voice commands also work for iPods or other devices plugged into the car's USB jack.

"My wife, I, and all three of my kids all have a digital media player, iPod or Zune, and a cellphone," said Kolde. "Everybody in my house can use this system."

In addition, owners of Sync-equipped cars can download software upgrades over the Internet and use a USB device to add the new software to their cars. This will allow Microsoft to fix bugs, install new features, and permit compatibility with future digital devices.

Microsoft and its allies are taking a different approach to telematics from Ford's archrival, General Motors Corp. GM's OnStar system, in service for over a decade, was the US auto industry's first big push to build advanced communications features into cars. As of 2007, OnStar became standard equipment on nearly all GM cars and trucks.

But while Sync is tailored mainly for entertainment, OnStar is designed as a safety and security system. "There's not a lot to compare" with Sync, said Nick Pudar, OnStar's vice president of planning and business development. "They're apples and oranges."

While OnStar can act as a hands-free cellphone, connecting to the Verizon Wireless cellular network, it's mainly used by drivers to contact a customer service center to ask for directions or call for help. The system can automatically detect when the car has been involved in an accident and telephone for help; it can also perform remote diagnostic checks on the vehicle's mechanical systems.

An early version of Sync, codeveloped with Italian automaker Fiat, offers vehicle diagnostics to European drivers. But this feature is nowhere to be found on the American edition.

So far, telematic devices like Sync and OnStar haven't gained much traction with consumers. Strategy Analytics estimates that only about 1.5 million cars will be sold in North America this year with Bluetooth technology for hands-free phone calling, while OnStar-type safety systems will be included in about 3.2 million cars.

Mark Fitzgerald, an automotive technology analyst at Strategy Analytics in Newton, said many consumers are put off by OnStar and similar products because they charge monthly fees of $20 or more. While Sync doesn't offer roadside assistance or diagnostics, it carries no monthly service fee - a fact that could appeal to many customers. Strategy Analytics predicts that by 2012, carmakers will sell 11.7 million cars in North America with Bluetooth-based systems, compared to 7.6 million with OnStar-type systems.