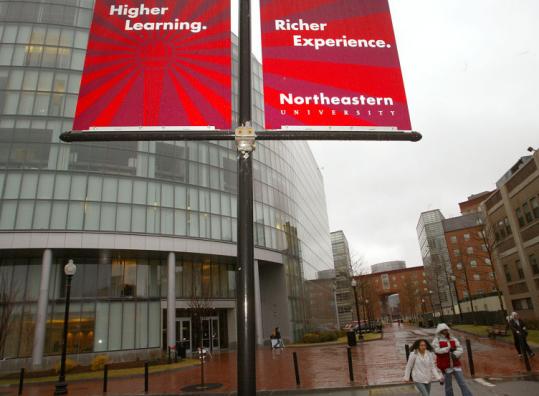 Northeastern University and a start-up company cofounded by an associate professor have filed a patent-infringement suit against Google Inc., claiming that database technology patented in 1997 was misappropriated by the world's most popular Internet search service.

"This particular patent has to do with the fundamental database architecture, which they use to serve up every single result they serve to you," said Michael Belanger, president of Jarg Corp. in Waltham. Jarg is a privately funded developer of advanced search technology. The company was cofounded by Northeastern associate professor Kenneth P. Baclawski and holds an exclusive license to the patent, which is owned by Northeastern.

The patent covers a method for chopping up database queries into multiple portions and having each part processed by a different computer. This allows for much faster searching of huge databases, like Google's vast index of Web pages on the Internet.

Though Google was incorporated in 1998, Belanger said he and Baclawski had no idea the company might be infringing the patent, until about 2 1/2 years ago. That's when a representative of a Boston-area law firm, which Belanger declined to name, told him of seeing a presentation by Google that described the company's Web search technology. The database search technique described in the presentation resembled Northeastern's patented technology, the law firm told Belanger.

"When a law firm tells us that it's very likely that the Google architecture is the fundamental architecture on which our company is founded, we have a fiduciary responsibility to our investors to do something," Belanger said. He did further research and became convinced Google was using the patented technology. But the law firm that provided the original tip refused to take the case unless it was paid in advance, and Jarg couldn't afford the fees.

"We are aware of the complaint and believe it to be without merit based upon our initial investigation," said Google spokesman Jon Murchinson. Northeastern University declined to comment.

Belanger said it took him 2 1/2 years to find lawyers who would take the case on a contingency basis - meaning they only get paid if they win. On Tuesday, those lawyers filed suit against Google in US District Court for the Eastern District of Texas in Marshall, a venue that specializes in patent cases.

According to the research firm LegalMetric, patent plaintiffs who sue in Marshall win 78 percent of the time. In addition, said Jay Sandvos, partner at Bromberg & Sunstein, an intellectual property law firm in Boston, the Texas court tends to issue higher-than-average financial awards to victorious plaintiffs. "If you're going to take on a contingency case, you want to feel you're going to get a big payoff," said Sandvos. "The Eastern District of Texas tends to be friendly that way."

But Sandvos said that while some frivolous patent suits are filed in Marshall, many serious litigants favor the Texas court as well, thanks to its vast experience in handling such cases. "Because they have so much patent litigation, they have a certain expertise," Sandvos said.

Belanger said he has no interest in shutting down Google. "We expect them to be generous enough to pay a normal royalty" if Northeastern and Jarg win the case. Northeastern will get half of whatever money is left after the lawyers are paid and other expenses are covered.

But any such outcome is a long way off. Sandvos predicted it will be one to two years before the case goes to trial.