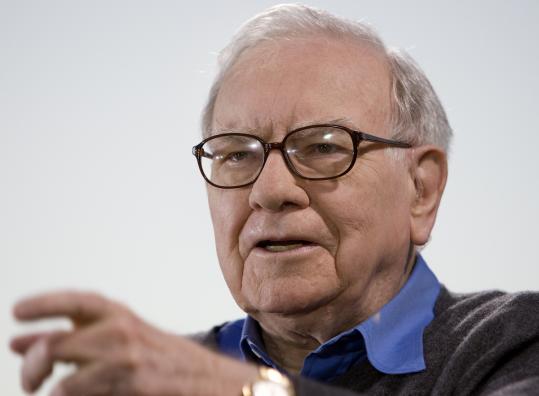 Warren Buffett has said the tax system in the United States has contributed to the growing gap between rich and poor. (Scott Eells/ Bloomberg News)
Associated Press / August 16, 2011

Billionaire investor Warren Buffett is calling on the “mega-rich’’ to pay more in taxes.

Buffett said yesterday in a New York Times opinion piece that he would immediately raise rates on households with taxable income of more than $1 million, and he would add an additional increase for those making $10 million or more.

He also recommends that the 12 members of Congress charged with devising a deficit-cutting plan leave rates for 99.7 percent of taxpayers unchanged.

“My friends and I have been coddled long enough by a billionaire-friendly Congress,’’ Buffett wrote. “It’s time for our government to get serious about shared sacrifice.’’

Buffett, who is chairman and chief executive of Omaha-based Berkshire Hathaway, has been calling for higher taxes on the super wealthy for several years. He has said the tax system has contributed to the growing gap between rich and poor.

President Obama cited Buffett’s op-ed to reinforce a point he was making at a town hall meeting in Cannon Falls, Minn., about spreading the pain when drafting a plan to deal with the nation’s mounting deficit. Obama drew laughter and applause when he quoted Buffett’s line about not coddling billionaires.

Buffett noted yesterday that the mega-rich pay income taxes at a rate of 15 percent on most investment income but practically nothing in payroll taxes. The middle class, meanwhile, typically falls into the 15 percent and 25 percent income tax brackets and is hit with heavy payroll taxes. He said Washington legislators “feel compelled to protect us, much as if we were spotted owls or some other endangered species.’’

Buffett said most of the mega-rich he knows wouldn’t mind paying more in taxes, especially when fellow citizens are suffering. He also said he has yet to see anyone shy away from investments because of tax rates on potential gains, even in past decades when rates were much higher. “People invest to make money, and potential taxes have never scared them off,’’ he said.