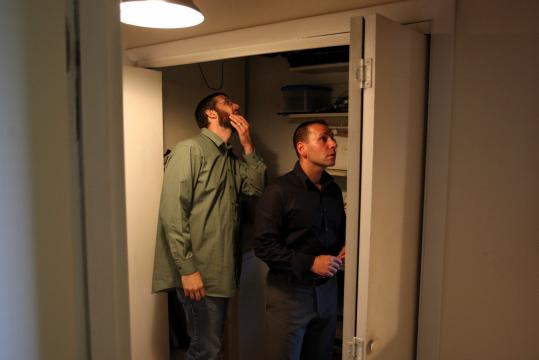 Inspired in part by the tax credit, Timothy Bailey (left), at a home in Weymouth with realtor Joe DeAngelo, is looking to buy. (Jonathan Wiggs/Globe Staff)
By Jenifer B. McKim Globe Staff / October 3, 2009

First-time home buyers anxious to take advantage of an $8,000 tax credit scheduled to expire next month are sparking bidding wars on lower-priced homes, according to Massachusetts real estate agents.

The tax credit - approved by Congress earlier this year to revive the dormant housing market - is limited to sales finalized by Nov. 30. But because home deals can take up to 60 days to complete, many prospective buyers are pressing to sign purchase agreements soon so they don’t miss out on the credit. Buyers are flooding agents with requests to tour homes, cashing out retirement plans for down payments, and - in some cases - driving up prices on the most desirable properties by competing with other home seekers.

John Schjolden, a real estate agent who specializes in selling bank-owned properties, said there is a growing buying frenzy because of the tax credit and a shortage of affordable homes in the area. He said he recently listed a two-family home in Dorchester that attracted nearly 200 potential buyers and result ed in more than 30 offers, some of which were significantly above the $194,000 asking price.

“There have been extreme bidding wars on properties that normally wouldn’t have them,’’ said Schjolden, president of Noble Properties Inc. in Weymouth. “I have had many buyers call me directly just to see if there is any hope for them to close before Nov. 30.’’

“Everybody is going crazy,’’ said Rodriguez, who rents in South Boston. “Opportunities like this don’t come too often.’’

While there is talk in Washington of extending or even expanding the credit - which is available to anyone who has not owned a primary residence in the last three years - no action is pending. In most cases, eligible buyers will be able to reap the benefit by paying up to $8,000 less in federal taxes.

David Shortsleeve, manager at Coldwell Banker in Worcester, said he has worked “straight out’’ since Labor Day helping people scramble to find homes priced between $150,000 and $250,000, an entry-level range for many first-time buyers. “There has been fierce competition over the last couple of weeks,’’ he said.

The looming expiration date on the credit has motivated some to accelerate home searches and revise their expectations. For instance, Paul Kelly, 28, said he switched his focus from finding an affordable home in Jamaica Plain or Cambridge to South Boston, where he recently signed an agreement to buy a 600-square-foot loft for $213,500. He is scheduled to close on the property Oct. 30.

“I did feel the anxiety the second half of the summer,’’ said Kelly, a facility manager at Bentley University in Waltham. The prospect of losing out on $8,000 from the government “really provided me the motivation to get out there and find the right place for myself,’’ he said.

Pat Magnell, a real estate agent with Buyer’s Choice Realty in North Andover, said she is surprised by the number of people who are only now deciding to look for a home because of the federal incentive. Although the credit is attractive, Magnell said, it should not drive such an important purchase.

“Some people have taken things to extremes and they are not necessarily keeping things in perspective,’’ she said. “Long term if you make a bad decision it will cost you more than $8,000.’’

Partly because of the new urgency, the number of homes under agreement in the state swelled by 6 percent in August, compared with the same month last year, according to the Massachusetts Association of Realtors. Single-family homes sales in August also increased by 2 percent compared with the same month in 2008, according to the Warren Group, a Boston company that tracks Massachusetts real estate data. That marked the second consecutive month of sales increases in the state, the Warren Group said.

But the tax credit isn’t the only reason more prospective buyers are being lured to the market after watching from the sidelines as the economy fell into recession. Boston-area buyers are also inspired by low mortgage rates and home values that have dropped about 15 percent since their 2005 peak, according to the S&P/Case-Shiller Home Price Indices, a national index that measures repeat sales in residential markets. Home values have been on the increase since April, according to the index, which suggests bargains may soon be harder to come by. At the same time, the number of available properties in Massachusetts was down 16 percent on Aug. 31, compared with the same date in 2008, according to the state realtors association.

“Anything that remotely fits the bill is under agreement with multiple offers,’’ said Joe DeAngelo, a real estate broker with Gibson-Sotheby’s International Realty in Boston’s South End. “People are very stressed.’’

Timothy Bailey, 38, and Cornelia Hoskin, 39, have spent six months looking for a home in hopes of taking advantage of the stimulus money. But they said Boston-area homes in their range - about $300,000 - are selling fast if they are fairly priced and in good condition.

Bailey said that a few weeks ago he and Hoskin were panicking about the prospect of letting $8,000 slip away, but they have adopted a pragmatic approach - the couple won’t buy just to get in under the deadline. “We are looking forward to, hopefully, getting something and using that stimulus money to make it a livable place,’’ he said.

Adding to pressure, the Nov. 30 deadline falls on the Monday after Thanksgiving. That means lending staffers probably will be hard to find on the last three days of the preceding week, said real estate agent Melvin A. Vieira Jr. He is advising people to close on a sale no later than Nov. 24.

“The banks better be ramped up and ready to go,’’ said Vieira, a real estate agent at Re/MAX Landmark in Milton. “They are going to be the busiest days they’ve ever seen in their life.’’

Not that bankers are moving at a leisurely pace now.

Charlie Nilsen, chair of the Massachusetts Mortgage Bankers Association, said lenders are under pressure from buyers who want to move quickly on their closings. But if people don’t strike a deal soon, he warned, even the speediest banker won’t be able to move the paperwork along fast enough.

“Our counsel is don’t wait too much longer, don’t assume [the credit] will be extended,’’ he said.