If you grew up like I did on a steady diet of "The Jetsons," "The Six Million Dollar Man," "Star Wars," and "The Terminator," then you've been wondering when all your robot fantasies might become true. But unlike personal jet packs (never happened) and hover craft (another back-of-comic-book pipe dream), cyborgs, androids, and avatars are real. With wit and insight, Mark Stephen Meadows separates science fiction from actual fact, navigating the ethically sketchy territory of domestic robots and autonomous military robots, artificial hands, and artificial emotions. "We, Robot" raises the crucial questions that robot-makers largely ignore. In doing so, Meadows shows us that in our quest to create more and more life-like robots, we've become more robotic ourselves. 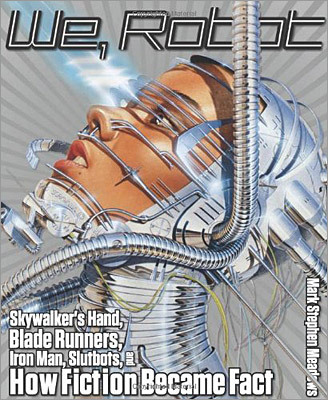 Ethan Gilsdorf is the author of "Fantasy Freaks and Gaming Geeks: An Epic Quest for Reality Among Role Players, Online Gamers, and Other Dwellers of Imaginary Realms," now in paperback. Follow his adventures at www.ethangilsdorf.com.