24 arrests at Bank of America protest 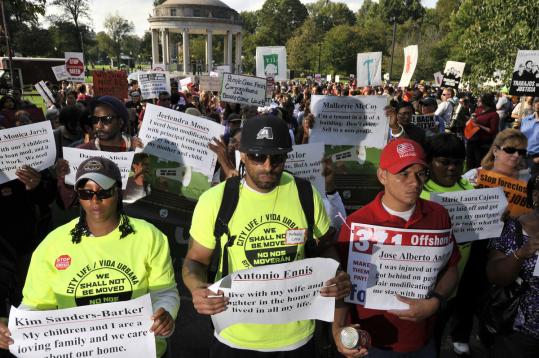 Twenty-four people were arrested yesterday during an antiforeclosure protest outside of Bank of America Corp.’s downtown Boston headquarters.

According to organizers, several thousand protesters gathered on Federal Street to show support of homeowners fighting foreclosure. Some staged a sit-in inside the bank’s lobby in an attempt to pressure the country’s largest bank to help struggling property owners save their homes. The arrests were made after some refused police orders to leave the building. Those arrested were charged with trespassing.

Boston police declined to estimate the size of the crowd. The protest was led by a coalition of activist groups called Right to the City Alliance, which wants Bank of America and other lenders to modify loans to more affordable payments by reducing the size of mortgage balances.

Organizers had said in advance that some protesters might seek to be arrested in a show of civil disobedience.

“The numbers that came out today were awe-inspiring,’’ said Jason Stephany, a spokesman for the activist group MassUniting. “It is a testament to the gravity of the situation. People are hurting. This is only the first step in a long journey.’’

Bank of America spokesman T.J. Crawford said demonstrators unfairly targeted the lender, which he said has undertaken major efforts to help homeowners modify loans and stay in their homes.

“These individuals choose to ignore the facts and instead focus on aggressive PR stunts,’’ Crawford said.