Living the dream. Sort of.

Young Irish workers seek US jobs, but the market is similar to home 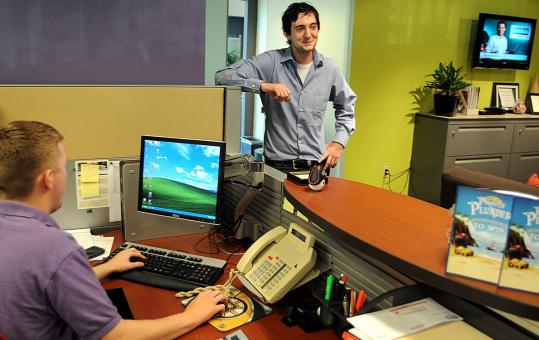 Bryan Lyons (right), who is from Ireland and lives in Boston, searched long and hard for a job before he received an internship at Arbella. (Debee Tlumacki for The Boston Globe)
By Steve Holt Globe Correspondent / August 24, 2011

Like generations of his countrymen, Bryan Lyons followed a well-trodden path from Ireland to Boston, leaving behind a shattered economy for the prospect of work in one of the world’s financial centers.

What he and other young Irish workers have found instead is a job market little better than back home and a financial system only slightly less damaged.

“At the start, we thought we’d walk into a job,’’ said Lyons, 24, who attended the National College of Ireland in Dublin for human resource management. “We thought we’d come over here and find a job very quickly, but that wasn’t to be.’’

Lyons is in Boston under a US government visa that allows Irish applicants to pursue work in their field for a year. After a long and frustrating search, he finally found a position in human resources with Arbella Mutual Insurance Co., with the help of the Irish International Immigrant Center of Boston. The center is assisting 70 interns in the United States under the J-1 Intern Work and Travel visa, with another 100 or so expected to arrive in the next few months, said Megan Carroll, director of intern placement. The jobs are scattered in major cities, mostly on the East and West coasts.

While seemingly little different from Americans fresh out of college and struggling to find work, Lyons and the many other Irish youth who have been placed in internships at Boston companies have an employment perspective few in this country would want to experience. They grew up during the 15-year Irish economic boom and were not familiar with the hardship of previous generations.

“There is a slight sense of entitlement growing up in the boom,’’ Lyons said. “Everything we did came a lot easier for us. You were never found wanting for anything.’’

But then the Irish economy’s near-collapse in 2008 sent shock waves throughout its population, not least the graduates preparing to enter the workforce with expectations of easy fortune. The recession in Ireland is so deep that unemployment is above 14 percent and, by some estimates, the country is losing 1,000 workers a week to countries where jobs are easier to find.

But America is not the land of plenty it once appeared to immigrants from around the world. Many of the young Irish spent months searching for work; others still are.

“It’s tough in Ireland right now to get a job, especially in your field. But I’d say it’s equally as tough over here,’’ said Ian McGloughlin, a 24-year-old who studied property economics and finance at the Dublin Institute of Technology and gave up a good job at Coldwell Banker to search for something new in Boston. He now has a job as financial services representative for TD Bank’s Federal Street branch.

Grainne Conefrey, 22, has been in Boston since May looking for a position in sports management but said she has no intention of joining the migration back to Ireland just yet. She spends her days in the computer lab at the immigrant center, e-mailing companies for informational interviews - anything to get in the door.

“I’m not getting too worried yet but hoping to get something soon,’’ said Conefrey, a graduate of University College Dublin.

Something else that marks the young Irish here is that they do not appear discouraged by the difficult conditions of the US economy. Peter Rice, a former Irish intern in the visa program who has become a successful banker in Boston, said he sees in them an “unshakable belief in the American dream.’’

They may have no choice. Returning to Ireland without first finding success, Rice said, is not an option for most Irish.

At the TD Bank branch, Patrick McCrosson supervises McGloughlin and two other Irish interns and said they bring a better perspective on financial issues than Americans.

“I think they come over here with a knowledge of what not to do - that taking too many risks could be a bad thing,’’ McCrosson said.

McGloughlin also got his position through the Irish immigrant center.

“They’re not rich kids coming over here to do a gap year abroad. They’re over here because they can’t find the opportunities at home,’’ said Carroll, head of the intern program. “Even though we’re short on opportunities here too, one of the benefits to hiring these students is that they are so hard-working and motivated to make a difference and get some good experience and skills - and they only have 12 months to do it.’’

This summer, Arbella created a position for Lyons, the company’s first J-1 visa intern. Chief executive John Donohue said the immigrant center’s advocacy for newcomers sparked his interest but that he now sees the arrangement’s positive effects on Arbella.

“These are smart kids, and while they are learning from us, we benefit from the talents and skills that these mature, focused young workers provide,’’ Donohue said.

Many of the interns come from Ireland’s top schools. They had enrolled at a time when the country’s economy roared with what appeared to be unmatched success but turned out to be unbridled excess. Now many leave Ireland for any work, let alone work in their field.

And conditions back home are not likely to change anytime soon. So despite the Irish government’s hope that the young adults working here will return and lead their country’s rebuilding process, the workers themselves are leery.

“The problem is,’’ said McGloughlin, “there’s nothing for us to go back to.’’