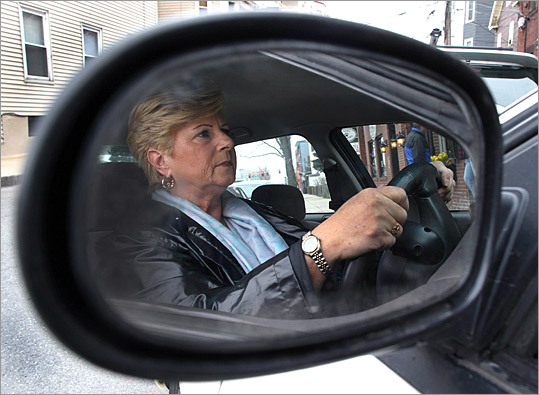 (John Tlumacki/Globe Staff) "It is outrageous. The economy keeps going bad, and the price of fuel keeps going up." – Pat Donahue of Dorchester, who says she and her family have all but eliminated weekend driving
By Erin Ailworth Globe Staff / April 21, 2011

With the cost of gas nearing $4 a gallon in Massachusetts and going even higher in several other states, families are cutting back on driving at an even faster pace than in 2008, when prices hit record levels.

Unlike then, when it took many drivers months to change their habits, households this time can’t afford to wait, analysts said. Layoffs, pay cuts, stagnant wages, and tight credit have weakened consumer finances and left little room in household budgets to absorb higher gas prices.

As a result, families are quickly adapting by carpooling, combining errands to save trips, and curtailing weekend outings, according to organizations that track gasoline consumption. Still, the US Energy Department projects that the average US household will pay $825 more for gas this year than in 2010.

NPD Group Inc., a market research firm, estimates that consumers bought roughly 128 million fewer gallons of gasoline in March than a year earlier, and about 60 percent are adjusting driving habits.

“The difference between now and 2008 is that consumers are really battered from what happened during the Great Recession,’’ said Chris G. Christopher Jr., senior economist at the Lexington forecasting firm IHS Global Insight.

Another sign that Massachusetts drivers are changing habits: An incentive program that rewards people for using car pools and mass transit attracted 1,500 participants in March, doubling participation in the program, which launched in January. The program is overseen by the state Department of Transportation.

The rising prices, meanwhile, are adding drag on the slow-moving recovery, analysts said. Even though gasoline accounts for a small share of total household spending — about 3.5 percent — rising prices have a greater impact because they can undermine confidence and lead consumers to curtail spending. Consumer spending drives about 70 percent of US economic activity.

“The gasoline price is perhaps the most visible price of anything that we buy,’’ said Chris Lafakis, an economist at Moody’s Analytics. “We see it every day — when we’re driving to work, when we’re driving back home — and many consumers purchase gasoline at least once every two weeks.’’

Consumer confidence fell last month, according to the Conference Board, a nonprofit research group, and many economists attributed it to gas prices. Few analysts expect the surge in prices to tip the economy back into recession, but higher prices will probably mean slower growth and higher unemployment.

Each 1 cent increase in gasoline prices costs US consumers about $1 billion a year.

“If this thing continues, it won’t necessarily derail the recovery,’’ said Christopher, “but the recovery is a lot weaker than we thought it would be at the end of 2010.’’

Gas prices have risen rapidly in recent months as unrest in the Middle East sent crude oil prices surging. Yesterday, crude closed in New York at $111.45 a barrel, up more than $3.

Motorists started pumping less gas nearly two months ago, as the price of regular unleaded began to top $3.50 a gallon, according to MasterCard SpendingPulse, which tracks gas sold at more than 140,000 stations. Last week, gas purchases were down nearly 2 percent from a year ago. MasterCard Spending Pulse noted sharp drops in gas purchases on weekends, a sign that families are cutting leisure trips.

Count Pat Donahue and her family among them. Donahue, who lives in Dorchester, said they have all but eliminated weekend driving, including trips to Framingham clothing outlets and visits to relatives in Mansfield and Rhode Island. In 2008, she said, it took months before they were persuaded that prices wouldn’t fall, and they needed to drive less.

“It is outrageous,’’ said Donahue, who earlier this week paid nearly $3.90 a gallon at a Dorchester Shell station. “The economy keeps going bad, and the price of fuel keeps going up.’’

A gallon of regular unleaded gas was averaging nearly $3.77 in Massachusetts this week, up $1 from a year ago, according to the Energy Department. Prices were more than $4 a gallon in half a dozen states, including Connecticut and New York, according to AAA’s Daily Fuel Gauge Report.

“It just smells like 2008 all over again,’’ said Jeff Bursaw, owner of Bursaw Gas & Oil in Acton. “Traffic is definitely down.’’

One reason consumers are adjusting habits faster is they have experienced surging gas prices before, said Chris Knittel, an MIT economics professor.

“During the last run-up in prices, they learned either how to take public transportation — the routes — or how to slow down and save,’’ he said. “They learned these strategies and so it’s easier for them to implement.’’

Mary Hicks of Dorchester said she was quick to curtail her driving when prices started to rise again, saying that she remembered the pain of paying for gas in 2008 — and her budget is even tighter now.

“Going past the pump, you just get angry,’’ she said. “I started cutting back when gas started creeping up toward $3, because it started hitting my wallet.’’

Instead of just consolidating outings, as they did three years ago, Hicks and her family avoid driving whenever possible. Hicks said she used to drive five to six days a week; she has cut that to about three days.

Has the rise in gas prices affected your driving?