Living better on less? It’s easier than you think — with a bit of planning 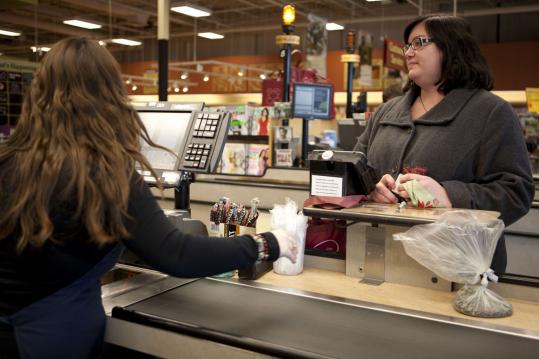 Marianne Gries shops around for bargains — and finds them by purchasing in bulk at Whole Foods Market. Getting the most out of your money takes discipline, she says, but “it’s thrilling to me to set a number and stick to it.’’ (Kayana Szymczak for The Boston Globe)
By Kathleen Pierce Globe Correspondent / March 6, 2011

Marianne Gries enters Whole Foods Market in Bedford with a determined look in her eye. She is not here to browse or squeeze the Charmin. The 37-year-old director of a small nonprofit in Lowell has an agenda: getting out of this notoriously pricey supermarket for $20 or less.

She makes a beeline for the bulk food aisle, where she scoops up organic lentils and grains from large bins, weighs them, bags them, and pays an estimated 50 percent less than if she bought prepackaged versions in other aisles. She finds quinoa, a grain that can sell for more than $7 a pound, for $3.69. She snaps up small-batch roasted coffee for $4 a pound less than it costs on the shelf.

Buying in bulk is just one way in which Gries manages to live fabulously, yet frugally. She surveys grocery store websites to find the best sales, buys second hand, and, when she can, does it herself, such as knitting the Shetland wool shawl draped around her shoulders. She still enjoys the finer things, like a night out at a restaurant. She just doesn’t pay full price.

“Your attitude changes when you look at money as a tool to improve your life,’’ she said. “I think about how to use it to make the maximum impact.’’

Getting the most out of your money isn’t hard, says Gries. But it requires planning, monitoring, and discipline.

She begins with a spreadsheet, where she and her partner plug in their salaries and necessary expenditures such as rent, medical bills, and $150 every other month for hair maintenance. There’s also a line item for family fun.

The blueprint helps track their spending and pinpoints when and where they need to pull back. They review it weekly. “This way money is not a mystery,’’ says Gries. “Knowing you only have x amount to spend takes the anxiety of out of it.’’

Before they began tracking expenses, for example, they ate out four times a week, usually after a hard day’s work “when we were tired and cranky,’’ Gries said. They found they were spending a lot of money on something they weren’t enjoying. So they cut back on restaurant meals, cooked at home, and put their money toward weekend getaways to places like Bar Harbor, Maine.

When she does visit a restaurant, it’s usually with an online coupon from Groupon, Living Social, or Restaurant.com, websites offering daily deals and half-price gift certificates. Recently, she bought a $50 gift certificate to the Left Bank Restaurant in Tyngsborough for $25.

“I’m a person who gets very excited about not paying full price,’’ she said. “I feel like I’m getting away with something.’’

This not-always-so-frugal Yankee learned the value of a dollar the hard way. Laid off from a local nonprofit in December of 2008, Gries suddenly faced a cash flow problem. Instead of bemoaning her situation, Gries turned it into a sport. She launched the “$60 a Week Project’’ and blogged about her weekly grocery store trips on a tight food allowance.

She made lists of specific items she needed for recipes (“Don’t wander around the aisles,’’ she said), shopped at lower cost stores, and carried an envelope with no more than $60 in cash inside.

She didn’t settle for macaroni and cheese, either. The result of careful planning and shopping were gourmet meals, such as mushroom and leek pizza made for $6. She snapped photos of her dishes, posted them on her blog, and shared the recipes.

“I’m kind of competitive,’’ she said, “so it’s thrilling to me to set a number and stick to it.’’

Now employed and spending more on groceries, Gries hasn’t lost her competitive edge. When she visits her local cafe, she’s armed with a commuter’s mug and pays a $1.10 for a 20-ounce pour, compared to $2 in a cafe-provided cup.

Instead of swinging by the mall for household appliances, she’ll log onto Freecycle.org, an online forum where people give away unwanted items. She’s landed a Cuisinart food processor and a Le Creuset pan, prized kitchen tools that normally come with hefty price tags.

“Many times, second hand is better quality,’’ she says.

Gries also avoids bookstore chains in favor of the library or Used Books Superstore in Nashua, where she recently nabbed Oprah-approved “The Pillars of the Earth’’ by Ken Follet for $1, compared to $24.95 at Barnes & Noble.

She is even thrifty in thrift stores. While the deals, especially for jewelry, can be insane, she won’t spend more than $15 on baubles.

Her favorite way to save money is cooking at home. Gries, for example, makes granola from bulk-bin oats and nuts for pennies a serving, instead of shelling out $6 or $7 a box.

Ultimately, her most useful tip is less practical and more philosophical. “You are not your salary or your wardrobe,’’ she says. “You shouldn’t get hung up on money and let it ruin your life.’’