THIS STORY HAS BEEN FORMATTED FOR EASY PRINTING
Living Longer, Living Better | Finance

After a lifetime of saving, it is OK to splurge a bit — as long as you have a thought-out plan 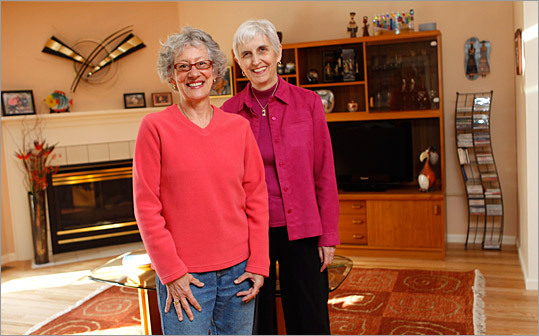 After some initial reticence to spend, retirees Joyce Richmond (left) and Andrea Shirley have been traveling and renovating their condo. (Joanne Rathe/Globe Staff)
By Ted Siefer Globe Correspondent / February 27, 2011

Over the course of 35 years as a Newton teacher, Joyce Richmond saved and saved, making the maximum paycheck deductions for her retirement account, and adding to savings whenever possible. Together with her wife, Andrea Shirley, the couple amassed a nest egg approaching $1 million.

But when Richmond retired two years ago, the couple faced a completely different problem: how to spend the money.

To be sure, they had some big ideas — traveling the world, joining a tennis club — but deeply engrained habits kept them from making bold moves. “It was just hard to wrap our heads around you have this much money and it’s going to last you until your 90 or longer,’’ said Shirley, 69. “We both come from backgrounds that stressed saving, and our inclination was just to keep saving.’’

Richmond, 59, and Shirley faced a question that vexes many retirees, and often keeps them from enjoying their hard earned savings: How do you spend that pot of money and make it last 30 years after the paychecks stop? For many, according to retirement specialists, the fear of spending savings too quickly can become paralyzing, leading them to forgo their dreams.

“People get to retirement with a decent-sized pile of money, then they freeze in terror,’’ said Anthony Webb, research economist at the Center for Retirement Research at Boston College. “I think a psychologist would probably say the complexity of the problem causes cognitive overload. People think the best thing is to spend absolutely nothing.’’

To enjoy their money in retirement, financial advisers say, people need the same kind of budgetary discipline that allowed them to build nest eggs in the first place. It’s still a matter of calculating income and outgo, and developing a plan that ensures balance between the two.

A good place to start is tallying costs. In addition to routine expenses — food, utilities, taxes, housing, travel, entertainment, and so on — it’s important to plan for big ticket items, such as replacing a roof, said Stuart Armstrong, a financial planner in Boston.

“You just don’t know the impact [health care] is going to have,’’ Armstrong said. “Even people approaching retirement in excellent health have to plan for that.’’

With a clear idea of expenses, retirees can turn to the other side of ledger. Cash flow planning can help free retirees to spend on the things they want, whether it is travel, a retirement home, or gifts to children and grandchildren, said Jim Thompson, an adviser with Village Financial Partners and the president of the Financial Planning Association of Massachusetts.

First, identify and add up streams of income. Social Security and pension payments are an example. Interest from savings accounts is another. Some investments, such as government bonds and stocks that pay dividends, can also provide reliable income.

Other financial products can provide a steady flow of income, too, said Thompson. Systematic withdrawal plans, for example, provide regular payouts from mutual fund accounts in specified amounts and intervals. Annuities are another option. They are basically an insurance contract in which a retiree makes a lump sum or series of payments in exchange for guaranteed income for life.

“Some will be drawn to the annuity side because they love the security. They don’t have to think about market performance,’’ said Thompson. “Others would never want to tie up capital like that.’’

Whatever approaches are chosen, said Nan Sabel Kaftan, financial planner with the Women’s Financial Network in Bedford, the key factor is they instill the confidence in retirees to make the most of their later years.

“I’m a big believer in enjoying the now,’’ Sabel Kaftan said. “I’ve seen too many people who postpone what they want to do, and then the health issues come, whether with them or a family member.’’

It’s advice that her clients Joyce Richmond and Andrea Shirley have taken to heart, especially after Richmond’s treatment for breast cancer last year.

Now, the couple has hit their stride. They went polar bear sighting in Manitoba in October, and recently returned from Central America. They’re preparing for a riverboat journey from Nice to Paris this summer. Meanwhile, they’re renovating living and dining rooms in their condo.

“A year ago this time I was dealing with breast cancer,’’ Richmond said. “I’m going to live my life to the absolute fullest with the cards I’ve been given.’’

You worked hard to save money for retirement. Here are tips to help you enjoy it:

Turn vague retirement dreams into concrete plans. The sooner a price tag is affixed to things like travel and second homes, the more likely you can develop a plan to attain them.

Channel assets and savings into fixed-income streams through investments, annuities, and other products.

Develop a budget. Take into account not only monthly living expenses, but bigger ticket costs, such as home and car repairs.