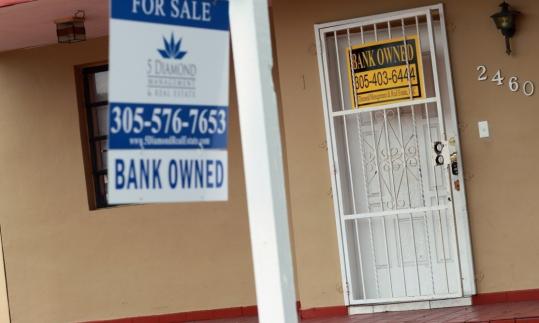 Bank repossessions rose to their highest level in September, with the number of homes seized topping 100,000 in a month for the first time, foreclosure tracker RealtyTrac reported. (Joe Raedle/Getty Images)
By Dan Levy Bloomberg News / October 15, 2010

SAN FRANCISCO — More than 100,000 US homes were seized by lenders in September, a record number that probably will decline in coming months as major banks halt repossessions and review their foreclosure practices.

Lenders took over 102,134 properties last month, RealtyTrac Inc. reported. That was the highest monthly tally since the company began tracking such data in 2005, surpassing the August record of 95,364. Foreclosure filings, including default and auction notices, rose 3 percent from the prior month to 347,420. One of every 371 households received a notice.

Sales of properties in the foreclosure process accounted for almost a third of all US transactions in the month, a sign that a prolonged delay in repossessions may hurt the housing market, RealtyTrac said.

Bank of America Corp., the largest US lender, said Oct. 8 that it would curtail foreclosures nationwide; JPMorgan Chase & Co. and Ally Financial Inc. stopped seizures in 23 states where court approval is required.

“We’re talking about loans that are almost certain to be foreclosed on,’’ said Rick Sharga, senior vice president of RealtyTrac. “The delays are only providing a stay of execution.’’

Attorneys general in all 50 states began a coordinated investigation Wednesday into whether lenders used false documents to justify foreclosures.

Foreclosure filings totaled 930,437 in the third quarter, a 4 percent rise from the previous three months and a 1 percent decline from the same period of 2009, RealtyTrac said.