THIS STORY HAS BEEN FORMATTED FOR EASY PRINTING
Spending Smart

Budgeting’s back in vogue, and these websites make it easier 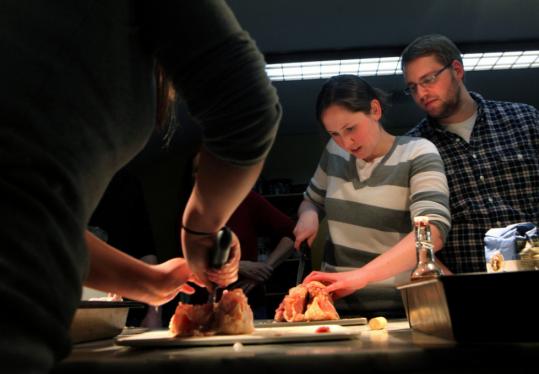 Pear Budget showed Scott Schulthess he was spending $500 a month on dining out, so he and his girlfriend, Sheilagh Doerfler, are taking a cooking class. (Michele McDonald for The Boston Globe)
By Kimberly Blanton Globe Correspondent / February 21, 2010

Buyer’s remorse hit Scott Schulthess minutes after he flipped open his laptop at a Cambridge coffee shop to review his spending habits last year on PearBudget.com.

“This makes me feel bad,’’ said the 26-year-old computer programmer, focusing in on his June purchase of an iPhone, displayed in his online account on the budget-tracking website. On impulse, he bought the new phone rather than repairing his old one. “Basically, a waste of $400.’’

In tough economic times, more and more people are flocking to budget-tracking websites - Pear Budget, Mint.com, money.Strands.com, Wesabe.com, and JustThrive.com - that give users a sense of where they’re actually spending their money each month. Some budget-tracking sites are even rolling out new features such as iPhone applications, Twitter alerts, and Spanish-language options as they compete more fiercely for customers. Personal finance websites, ranging from budget trackers to financial blogs, are becoming increasingly popular and now attract one in four people who use the Internet, according to Comscore.com, which tracks Web traffic.

“There’s been a profusion of these things, in part because of what’s going on in the broader economy,’’ said Paul Kedrosky, who writes an economics blog in San Diego called Infectious Greed. “People feel they have to be more frugal, so budgeting’s in vogue.’’

These budget-tracking websites are becoming so popular that banks are now purchasing the software for their online customers so they can preserve crucial banking relationships. Budgeting software “is the future of online banking,’’ said Peter Glyman, a founder of Geezio, which sells the software to banks and credit unions.

The theory behind budget-tracking websites is that people often know their money disappears fast but they don’t know precisely where it goes. Seeing, in detail, where spending occurs is the first step to curbing it. To help users budget, these sites sort each expense into a fixed or customized category - rent, utilities, clothing, Starbucks, gym membership - and then compare actual spending to that category’s budget amount, specified by the user in advance. The sites’ colorful charts display whether users are under- or over-budget every month in each category.

A common realization by users of budgeting websites is how much they spend every month eating out, said Aaron Patzer, Mint’s founder and chief executive. Indeed, in a recent survey of Mint users, 90 percent said they changed their spending habits after using the budgeting software, and 40 percent said they cut back on dining out.

“Having the feedback and the awareness that you went to Starbucks 30 times last month changes peoples’ habits,’’ Patzer said.

Schulthess, the Cambridge resident, said he and his girlfriend started taking cooking classes so they could cut their food budget after Pear Budget showed he was spending $500 a month on dining out. Despite lapses like the iPhone splurge, he said Pear Budget helps him stick to his goal of saving 10 percent of his income. Schulthess said he’s saved about $200 per month on food alone.

“If you get laid off or wanted to change your job, you need financial security to be comfortable,’’ he said.

Budgeting websites are free to users, but some earn revenues each time they successfully direct users to financial products, such as credit cards, offered by advertisers, which some say implicitly encourages the use of credit to someone who may instead need to curb their spending.

The sites also differ in how they collect data. Some sites are automated budget trackers, which require users to provide their bank, credit card, IRA, and other account numbers and their online passwords. The budgeting site then uses this information as permission to receive a download of their spending and income data from the financial institution.

Mint, which extracts the data automatically, has emerged as the giant among the sites. With more than 1 million unique visitors per month, according to Compete.com, a website that tracks Internet traffic, Mint became so successful that it was purchased by financial software maker Intuit in September for $170 million. Intuit plans to replace the online version of its famous Quicken software with Mint’s more modern technology, the companies said. Wesabe, which also extracts data automatically, is the second-most-popular site for individuals, with more than 35,000 unique visitors per month.

But many potential customers, particularly older users, are uncomfortable with turning over their account information to a third party. To reach a broader audience, some budget sites are adapting. Money Strands, which was rolled out less than a year ago, offers manual and automatic data entry. Mint.com said that it also plans to offer manual data entry in coming months.

“Many people from all ages say, ‘I would never share that information,’ ’’ said Diane Ty, an AARP senior vice president and expert on personal finance.

MINT.COM
Pros: Mint.com uses state-of-the-art software to extract a user’s financial information from bank accounts, credit cards, and other sources. Unlike some sites, it also tracks a wide range of financial activities, from IRAs to college funds. Other features include a weekly e-mail or text message listing user’s five largest expenditures. Slick, colorful graphics and an iPhone application are also appealing.

Cons: Requires users to turn over account passwords, though the company points out that it does not store users’ personal information - only data - or their passwords. Users report issues arise from downloading data from their bank or other accounts such as an inability to connect to certain financial institutions and glitches in categorizing some expenditures.

Final word: Mint.com is the granddaddy of budgeting websites. The site said that it is working to continually support more institutions.

MONEY.STRANDS.COM
Pros: Rolled out less than a year ago and in use at a major Spanish bank, the budget-tracking website has features older sites lack, including a Spanish-language capability, iPhone app, advanced data analysis, and support for 44 currencies. Key distinction from other sites: automated data extraction, like Mint, but also a manual capability for those leery of turning over bank account information to third parties.

Cons: The newest of the budget-tracking sites is still working out the kinks and responding to user comments and complaints. Does not integrate investment accounts.

Final word: The jury’s out. But Atakan Cetinsoy, vice president of personal finance products, said the company is serious about creating a website that strikes the crucial balance between simplicity and usefulness. An “obvious next step’’ is to integrate users’ investment accounts, he said.

PEARBUDGET.COM
Pros: Popular because it’s really easy to use and simplifies for people who may be overwhelmed by budgeting. Founder responds personally to users’ questions.

Cons: No automated data download - only manual expense and income entry is allowed by the software.

Final word: Created by Charlie and Sarah Park in 2004 and still run out of their Williamsburg, Va., home. Park said he remains true to his original mission of helping people, providing personal service, and creating a homey feel.

WESABE.COM
Pros: The best site for people who seek the emotional encouragement of an online support group to discuss financial issues or solicit solutions to problems such as debt overload. Offers suggestions for low-cost retailers in the user’s neighborhood. Has iPhone and other smartphone apps. User complaints and questions are visible to all - not just members who log in.

Cons: Advice from third parties can be unreliable. Users complain that responses to requests for Web support have slowed, and the company agrees it is running behind. Automated data extraction only.

Final word: The four-year-old company is one of the most popular sites - 37,500 unique visits per month - and suffers from some growing pains. Customer support has slowed but remains a priority: Founder and chief executive Marc Hedlund responds personally on the site to users with complaints and questions.

JUSTTHRIVE.COM
Pros: Cool feature allows users to designate a specific savings goal and track progress toward that goal. The site also provides education or guidance about how to reach goal.

Cons: Automated data extraction only. Budget tracker also can be accessed via MoneyRight.com in the wake of acquisition by Lending Tree.

Final word: For those who find it hard to take directions via e-mail or Twitter, JustThrive is a great bet. It provides good customer service over the phone, which is important for serious budget trackers who aren’t Web whizzes.