For savers, low rates are matter of high interest 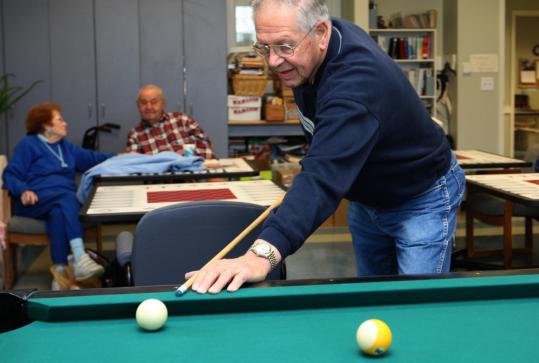 Arthur Lowell, 80, played pool recently at the Hopkinton Senior Center. Lowell pulled his investment income out of CDs when rates began to decline and moved about $60,000 into the stock market. “We all know how that went,’’ he said. (Photos By Joanne Rathe/Globe Staff)
By Megan Woolhouse Globe Staff / February 6, 2010

Record-low interest rates that have been a boon for borrowers are hurting savers, especially seniors who depend on bank account interest to supplement their incomes.

Certificates of deposit, a popular savings option for conservative investors, are paying an average of just 0.58 percent interest for a six-month term, according to the Federal Deposit Insurance Corp. That is down from more than 5 percent in 2006. Savings accounts are yielding even less.

For those who put most or all of their money into CDs, the impact has been dramatic, causing some to rethink their budgets. For example, a $100,000 six-month CD that earned $5,233 four years ago generated $780 in interest last year, about $85 a week less.

Donna McGuire, 65, a recent retiree, said she and her husband were relying on interest from savings to boost their retirement budget. With their savings income down, the Hopkinton resident may have to look for a part-time job.

“These are supposed to be my golden years,’’ McGuire said, “and they’re rusting.’’

Historically, the Federal Reserve has managed the economy by raising and lowering the key bank-borrowing rates that influence what banks pay savers. But the Federal Reserve has never cut those benchmark borrowing rates to the current level - near zero - where they have been at for more than a year. With significant rate hikes probably a long way off, conservative investors face a difficult choice: Cope with reduced income or choose riskier options with potential for better gains.

It is the downside of a strategy designed to turn around the lagging economy by making it cheaper to borrow money. Some savers complain they are being penalized for doing precisely what the federal government has long advised Americans to do: save. They did not purchase homes beyond their means, sign up for interest-only adjustable mortgages, or pile extravagant purchases on credit cards.

“It takes money out of the pockets of savers and gives it to the borrowers who are up to their eyeballs in debt,’’ said Greg McBride, a senior analyst at Bankrate.com. “You’ve got Aunt Mildred putting money in [savings] and it goes to a guy with a new house and two new cars.’’

Mark Zandi, chief economist at Moody’s Analytics, said while the decline in interest rates has been a “net positive’’ for the overall economy because it costs less to take out a loan, the accompanying low savings rates strain some households, particularly those of middle-class seniors.

“It’s not a slam dunk positive,’’ Zandi said. “Many people think the people who rely on interest are generally wealthy or well-to-do, but there are many middle-income seniors who rely on it, and it does create a substantive hardship.’’

Certificates of deposit have been attractive to older investors or those saving to reach a short-term goal, like a down payment on a home, because they are guaranteed by the FDIC. In return for committing their money for set periods, investors are rewarded with an interest rate that is higher than the rate offered by a traditional savings account. Money market bank accounts also pay higher interest than regular savings but often require minimum deposits and include restrictions, such as limits on the number of monthly withdrawals.

Short term investors - those investing for a year or less - moved about $300 billion out of CD accounts last year. At the same time, savings accounts grew by $600 billion, as many people fled the plunging stock market. Some have turned to higher-yielding but more risky bond funds, said Brian Reid, chief economist for the Investment Company Institute, which tracks investment funds nationally. Reid said many investors did not want to get “locked in’’ to low CD rates, so they are keeping their money in savings until rates show signs of improvement.

The monthly yields for money market mutual funds have also fallen sharply in recent years, to a paltry 0.17 percent average last year, according to iMoneyNet of Westborough, a company that has tracked rates since 1975. Such accounts are mutual funds invested in short-term debt and, unlike money market bank accounts, are not guaranteed by the FDIC. Connie Bugbee, managing editor of iMoneyNet, said the extreme drop has shocked savers who put their faith in compound interest.

“You can’t compound what’s not there,’’ Bugbee said.

Many conservative investors are not even breaking even after factoring for inflation. In the last 12 months, the Consumer Price Index has risen 2.7 percent before seasonal adjustment. Anyone with an account that is getting less than that percent in interest is said to be experiencing what economists call a negative real return.

Therese Robert-Berri, 70, a regular at the Hopkinton Senior Center’s $4 lunch, said she recently renewed a one-year CD on the advice of her banker, though she wasn’t thrilled about locking up her money.

Robert-Berri said she has taken steps to cut back on expenses, eating all her meals at the center, and forsaking some expensive medications not covered by insurance.

Arthur Lowell, a lifelong Hopkinton resident, said he pulled his investment income out of CDs three years ago when he saw rates starting to erode and moved about $60,000 into the stock market.

“We all know how that went,’’ the 80-year-old said as he played pool on a recent afternoon at the Hopkinton Senior Center.

Lowell, a retired quality-control manager, said he feels lucky to live off a pension, a benefit fewer people will receive as more companies dismantle their retirement plans.