A consumer spending Q & A: Why it matters 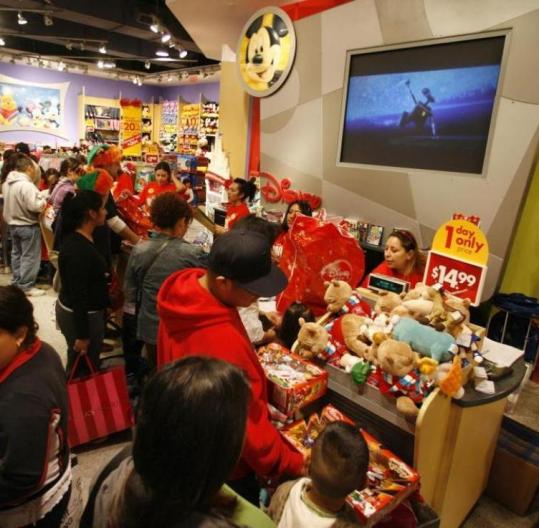 Shoppers line up at a Disney Store in Glendale, Calif. Consumer fears of a deep recession may have kept sales down. (Fred Prouser/Reuters)
By Ellen Simon Associated Press / November 30, 2008
Text size – +

NEW YORK - No pressure, but the economy's health rests on your shoulders.

The economists who know you as "The Consumer" are worried that you're buying less. Fewer cars, fewer engagement rings, fewer winter coats. Instead, you seem to be doing - finally - what your mother told you to do long ago: putting some money into savings.

That sounds so sensible. And it is. The only problem is that consumer spending totals 70 percent of the economy. When enough people shut their wallets, the whole economy shudders, as it's doing now.

Consumer spending dropped 1 percent in October, with demand for cars falling 4.5 percent. This was the fifth month of decline in real spending, which leaves out the effects of inflation, and the steepest five-month drop since 1980, when country was battling a deep recession.

As retailers begin a rotten holiday season, the question is: Does the country's dependence on consumers make it more vulnerable than it would be if the economy had a different engine?

Here are some questions and answers about consumer spending and the economy.

Q. Has consumer spending always been this large a part of the economy?

A. The rate has wavered. In 1929, the year the Great Depression began, consumer spending was nearly 75 percent of the nation's economy, a share that grew to 83 percent in 1932 as business spending shrank.

Conversely, as government spending increased toward the end of World War II in 1943 and 1944, consumer spending fell to half the total gross domestic product, the widest measure of the economy.

Consumer spending has been edging higher as a portion of the total economy intermittently over the last 25 years, helped by easy credit.

Q. What drives other economies?

A. In many of the largest industrialized countries - Germany, France, Italy, and Britain - government spending makes up a much larger share of the total economy.

On the other hand, those who argue for higher taxes and a broader safety net say the healthcare and other services many of those countries provide their citizens add to their economies in ways that can't easily be measured.

The federal government has committed some $7 trillion in its effort to contain the financial crisis - although there's widespread agreement it won't really spend anything close to that figure.