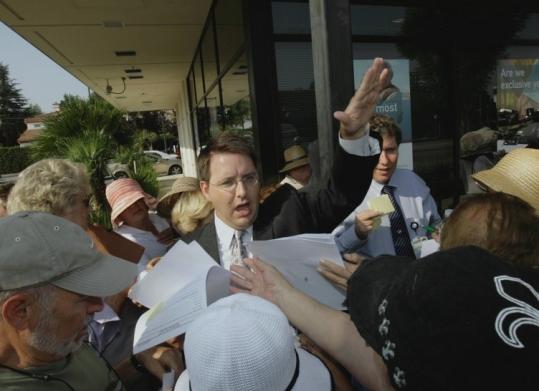 As many as 80 people were waiting outside the Encino branch when several people tried to cut in line, officer April Harding said. Order was quickly restored at the branch and private security guards stood watch, with police acting as backup.

As the morning wore on, customers leaned over a metal railing separating them from a row of security guards and yelled complaints. The main point of contention surrounded a sign-up list that was started late Monday after many customers gave up and left for the day.

"He promised us there would not be a list," one woman yelled at a security guard. "We don't know who to believe!"

As tensions rose, customers began pointing fingers at one another and trying to cut in line.

She was told to get to the back of the line.

Police left the branches at about 11:30 a.m., reporting no arrests or injuries.

Federal regulators seized Pasadena-based IndyMac on Friday and reopened the bank Monday under the control of the Federal Deposit Insurance Corp. Deposits to $100,000 are fully insured by the FDIC.

Worried customers with deposits in excess of insured limits flooded IndyMac Bank branches Monday, demanding to withdraw as much money as they could or get answers about the fate of their funds.

When it was clear some would not get in before closing, FDIC employees apparently took down names and told them to return yesterday.

By 9:30 a.m., there were more than 100 customers waiting in two lines - one for people who had put their names on the list Monday and one for everyone else. Many brought lawn chairs and umbrellas. Cars passing by honked in support.