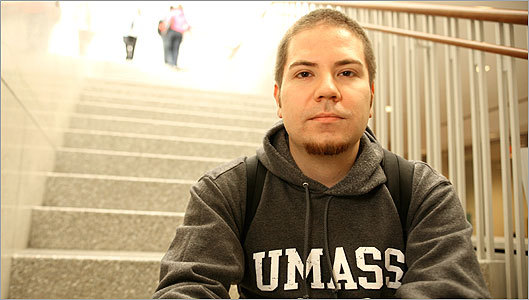 UMass Boston junior Tony Norton is in a bind after his recent student loan check from the Education Resources Institute was reversed. (Pat Greenhouse/Globe Staff)

Short of funds, lenders cut back

Anthony Norton, a junior at the University of Massachusetts in Boston, just learned a tough lesson in economics:

The credit market crisis is spreading to student loans.

Norton thought he was set when he deposited a $16,000 student-loan check to pay for summer classes and the fall semester. But when he started to pay bills for classes, rent, and other expenses last week, his checks bounced.

He was one of 500 students left in the lurch with the April 7 bankruptcy filing of The Education Resources Institute Inc., a Boston nonprofit that guarantees student loans. And his ordeal is only the latest example of chaos in the college loan market. More than 50 firms have abandoned or cut back their federal or private student loan programs this year, unable to raise money in the financial markets. Yesterday, Citigroup, one of the largest private lenders, said it would stop lending at some schools and end its federal loan consolidations.

While families used to secure student loans almost regardless of their credit history, "Those days are over," said Tony Erwin, director of financial aid services at Northeastern University in Boston and president of the Massachusetts Association of Student Financial Aid Administrators.

As students and parents begin the process of applying for financial aid and loans for the upcoming school year, Erwin warned, loans are going to be harder to come by and more expensive: "It's going to be a problem. There's no question about it."

Student loans have been among the easiest and cheapest loans to get - allowing millions of Americans to go to college as long as they promised to pay the bills after graduation. Given this year's challenging environment, many colleges are offering more assistance to students, such as more generous grants and direct government-backed loans with capped interest rates, such as Stafford loans.

But many families, especially those paying for private schools, will find that's not enough. For example, if a private college costs about $45,000 a year, a typical family will have to come up with at least $20,000 on their own, whether from loans or savings.

One Raynham mother and human resources executive was so concerned about nailing down private loans for her two sons in college that she applied in March, earlier than usual.

With $60,000 in tuition bills due this fall and her husband struggling with cancer, Lynne Tartaglia applied for $33,000 in loans from Massachusetts Educational Financing Authority, or MEFA. She received her approval on March 7.

Still, Tartaglia was nervous. So, loan agreement in hand, she contacted MEFA again. An e-mail she received in response said that Tartaglia had applied too early and that the rates and terms she was promised were not valid for the coming year. But she hopes they will honor her signed document.

MEFA's executive director, Thomas Graf, declined to comment on Tartaglia's loans. Earlier this week MEFA said it would no longer offer federally guaranteed loans - loans that 14,700 Bay State students took advantage of in the 2007-2008 school year. But Graf said he was "hopeful" that the 25-year-old nonprofit would be able to raise funds in the bond market to continue its private lending program.

"I'd feel a lot better if I got something in writing saying 'your loans are all set,' " Tartaglia said. "Until they do that, we'll be waiting."

Norton, the UMass student whose Teri loan vanished, was in the dark for nine days, asking his brother for a temporary loan.

Teri spokeswoman Beth Bresnahan called the glitch "regrettable," explaining that the group's Chapter 11 bankruptcy reorganization had frozen its assets, including money earmarked for checks already in the mail. Teri is still in the process of contacting students; it said it will make good on the bounced checks and cover any fees or interest penalties students incurred as a result.

Yesterday, Norton said the money had finally been restored in his bank account. "It was complete confusion. I just can't believe this happened," he said.

Some federally backed loans are capped at a 6.8 percent interest rate, while private loans can go into the double digits. The fact that interest rates, broadly, have dropped this year may offset some pain for borrowers.

But the slowing economy has many parents in worse financial shape than in the recent past. Some have lost jobs or houses, or seen their credit ratings drop. And home equity lines - a source of college borrowings for as many as a third of parents, estimates James Boyle, president of College Parents of America - also are going to be less reliable this year. Not only have home values fallen, but banks are less eager to extend these loans.

"Lots of parents are very nervous about it," said Karen Busanovich, a Woburn financial planner who specializes in student loans. "Home equity has been a good source in the past. Now they're saying, I don't have the equity in my home that I once had."

The chief of the Federal Reserve Bank of Boston, Eric S. Rosengren, said in an interview that no one expected the turmoil in the credit markets to last this long. It started last summer in subprime mortgages, and by February had spread to most debt markets, including auction-rate securities, where many nonprofits, like MEFA, borrow funds. In addition, the market for student loans that have been packaged and sold as securities dried up after last September.

Rosengren acknowledged the turmoil in the sector. "There are serious disruptions occurring," he said.

He said he believes efforts in Washington to make more federal backing available for loans will ultimately help students and families. Senator Edward M. Kennedy has introduced a bill that would increase federal aid and improve some federal loan programs.

In a statement, the Massachusetts Democrat said, "We can't allow the turmoil in the credit markets to become a barrier to college opportunity."