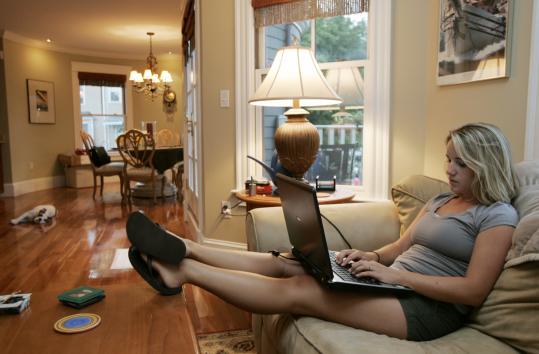 Michelle Dellascio, 20, got her own credit card when she was 18. She says some of her friends still need their parents to cosign for loans. (John Bohn/Globe Staff)
Email|Print|Single Page| Text size – + By Se Young Lee Globe Correspondent / September 5, 2007

Since the start of the year, Erin Ellia has been pinning credit card offers for her husband, John Conroy, on a cork wall at the couple's Weymouth home. After 20 years in the United States, Conroy is considering signing up for his first credit card; until now, the Irish immigrant's credit history has been based only on his experience as an authorized user on his wife's accounts.

Authorized users like Conroy can tap into someone else's line of credit, but they are not technically responsible for making payments. Because of an impending change in how credit scores are determined, he could be one of millions of people who might be denied access to cards in their name or loans by the middle of next year if he doesn't start establishing his own credit soon.

Fair Isaac Corp., a Minneapolis company that develops the formula that national credit bureaus use to calculate credit scores, currently factors in activity from authorized-user accounts. But lenders began voicing concerns about such accounts after some credit repair companies began employing a practice known as piggybacking. That's prompting a reconfiguration of the credit formula that will leave authorized users out of the equation in six to nine months.

Piggybacking works like this: Someone with bad credit pays a repair firm to be matched up to an account in good standing. The bad credit client has no access to the unblemished credit line, but their credit score benefits merely from the association. In return, the holder of the account in good standing is paid a fee by the repair company for allowing an authorized user to be added.

"The only purpose of the service is to misrepresent consumers to lenders," said Craig Watts, spokesman for Fair Isaac.

As a result, the company has devised new formulas for the three major US credit bureaus - Experian, Equifax, and TransUnion - that will no longer factor authorized user accounts into credit scores. While the move will put an end to piggybacking, Fair Isaac says as many as 3.3 million people in the United States will effectively lose their credit score because their credit history was established only through authorized user accounts. The company also said about one-third of approximately 165 million people who qualify for a Fair Isaac score have at least one authorized user on one of their credit accounts, usually a spouse, family member, or a child.

The industry is "using a shotgun to kill a couple of flies," said John Ulzheimer, president of educational services for San Francisco-based Credit.com, which provides credit and personal finance services. Ulzheimer, who used to work for Equifax and Fair Isaac, said consumers without established credit scores will have a difficult time obtaining loans or applying for credit online or through an automated system - and they probably won't realize why. The majority of those affected by the formula change are women, he added.

"When people get married, one of the spouses changes the way they use credit, and in more cases than not it's the woman," Ulzheimer said. "The problem is that 50 percent of people in this country who get married also get divorced. If these people have nothing but authorized-user history, they'll be starting with a new credit score."

Gail Cunningham, spokeswoman for the National Foundation For Credit Counseling, a Maryland-based financial counseling and services organization, said those whose credit scores are built on authorized-user account histories should try to establish their own line of credit before the formula change takes effect.

Parents looking for ways to help their children build a credit history will also need to look elsewhere. Cunningham recommended they get them store or student credit cards. But it's crucial they make monthly payments on time, she added.

Michelle Dellascio, a 20-year-old Boston University student, signed up for her own credit card account when she turned 18 to build a credit history. Establishing solid credit is important, she said, because she wants to be able to one day buy a home or a car. Some of her friends still need their parents to cosign for loans, she noted.

"I want to be able to separate myself after I'm done with school," Dellascio said. "I don't want to have to depend on my parents' credit when I'm an adult."

Se Young Lee can be reached at vlee@globe.com.