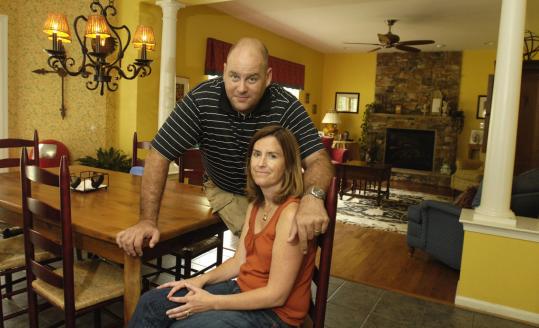 Despite his good financial standing, Todd Colvin, shown with wife Shannon, struggled to find a lender to provide him with a jumbo mortgage because he hadn't sold his Maryland home. (LESLIE E. KOSSOFF FOR THE BOSTON GLOBE)
Email|Print|Single Page| Text size – + By Kimberly Blanton Globe Staff / August 8, 2007

A growing credit crisis is prompting lenders across Massachusetts to cut back suddenly on new loans, making it difficult for even creditworthy borrowers to get mortgages and causing some home sales to fall through at a time when the housing market is already slumping.

The most prevalent impact in the Bay State so far involves borrowers with good credit now having trouble getting jumbo mortgages -- loans above $417,000 -- which are popular in Massachusetts because of the high price of housing.

Some borrowers who would have previously qualified are now being rejected for jumbo mortgages, while others are paying higher interest rates, mortgage bankers and real estate agents said. Rates for jumbo mortgages increased more than three-quarters of a point over the past week, to 7.875 percent, said Sushil Tuli, president of Leader Bank in Arlington. Meanwhile, rates on mortgages below the jumbo threshold, so-called conforming loans, have held steady or dropped slightly in recent weeks.

Keith Shaughnessy, president of Foundation Mortgage Corp. in Littleton, said the mortgage market "is moving right beneath our feet. The new story is people with good credit are now having a tough time getting a mortgage."

Also, Wells Fargo & Co., Wachovia Corp., and other major lenders said this week they would sharply raise interest rates on some mortgages or no longer offer certain loans because Wall Street investors now perceive them as too risky. National City Home Equity, one of Massachusetts's biggest lenders, also said it would no longer offer some home-equity loans.

In normal times, Todd Colvin, with his high credit rating, good income, and cash for a 5 percent down payment, would have no problem getting a jumbo mortgage, said Rosemary O'Neil, vice president of Conway Financial Services in Norwell, his mortgage broker. But Colvin, she said, "got caught in the crossfire of this jumbo market."

Hired in February as director of sales for Camlog USA, a Braintree maker of dental implants, Colvin is moving with his family from Maryland to a $665,000 home in Plymouth. But he couldn't find a lender willing to provide him with a jumbo mortgage because he hasn't sold his Maryland home yet -- even though he is confident of making the payments.

"We were definitely anxious," he said.

O'Neil eventually found financing for the Colvins by breaking the mortgage into two pieces: a $417,000 first mortgage and a second mortgage for $213,000. He is scheduled to close on the house later this month.

Jumbo mortgages have been affected because lenders are now concerned about any mortgage that does not qualify for sale to Freddie Mac and Fannie Mae, two of the nation's largest mortgage purchasers on the secondary market. Jumbo mortgages exceed the agencies' $417,000 purchasing limits. Such mortgages were 15 percent of all mortgage loans made statewide in 2005, the most recent figures available, compared with 10 percent nationally, according to the Mortgage Bankers Association.

The credit issues began building early this year with rising defaults among borrowers of subprime mortgages, but have spread with stunning speed in recent weeks as financial firms abruptly refused to continue investing in mortgage-related securities or to provide funding to some lenders.

Several mortgage company executives have said they have never witnessed such a sudden cutoff in credit, and analysts predicted the drought and subsequent turmoil may continue for several months.

The credit issues helped fuel wild gyrations in US stock markets in recent days and prompted calls from some Wall Street investors for Federal Reserve Bank officials to help soothe the market by lowering interest rates, which would provide access to cheaper credit.

But yesterday, the Fed's policy-making committee elected to leave its benchmark lending rate at 5.25 percent. The Fed committee acknowledged financial markets have been volatile, "credit conditions have become tighter for some households and business and the housing correction is ongoing," but concluded the situation does not threaten broader economy enough for it to lower interest rates.

The statement helped ease fears on Wall Street, as stock markets closed up after the Fed's report. But it did not mollify the lending industry.

Fed officials "could've helped the regional mortgage lending environment had they moved" rates down, said Kevin Cuff, president of the Massachusetts Mortgage Bankers Association. The mortgage market, he added, is "in disarray."

In July, mortgage sales plunged to $11.2 billion nationwide, from $41.6 billion in June and $92.2 billion in May, according to FBR Investment Management, which tracks the data.

Another corner of the market for prime borrowers is drying up rapidly. A handful of lenders have stopped issuing so-called Alt-A mortgages, which do not require documentation of incomes. The loans are issued to borrowers with high incomes and ample savings who do not want to reveal their finances for tax or privacy reasons, brokers and real estate agents said, as well as to some borrowers with less stable finances.

In a statement yesterday explaining its suspension of Alt-A loans, Wachovia said it is "becoming more difficult to sell these mortgages" to investors "as the financial markets continue to tighten."

The mortgage problems are also cutting into home sales at a time when real estate prices and home sales are in decline. Allison Horne, owner of Dynamic Capital Mortgage Inc. in Brookline, said one client with $200,000 in savings wanted to buy a $1 million home in Boston's South End, but had trouble lining up a mortgage.

The market turmoil "has totally affected people's decision of, 'do I want to do this,' " Horn said.

Terry Egan, editor in chief of Warren Group's publications, said the mortgage market's difficulties will delay the recovery in Massachusetts.