THIS STORY HAS BEEN FORMATTED FOR EASY PRINTING
Boston Capital

Ironically, many seek safety of Treasury 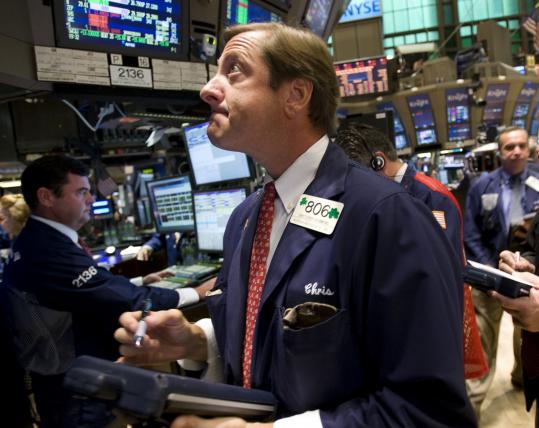 Stocks have been sinking for more than a month. The S&P 500 has lost 17 percent of its value since early July. Above, the floor of the New York Stock Exchange yesterday. (Scott Eells/ Bloomberg News)
By Steven Syre Globe Columnist / August 9, 2011

Investors are running away from risk like no time since the bleak days of 2008, and there aren’t very many places to hide.

The stock market reacted to Standard & Poor’s opinion that US Treasury securities aren’t quite so safe as they used to be. Add to that the European debt crisis and US recession fears, and you have what amounts to a selling stampede.

And one place investors moved their money? To US Treasurys.

Well, sure. But it also shows how few options are available to investors when hordes of them lose their appetite for any degree of financial risk.

An old favorite, gold, hit a record and cost more than $1,700 per ounce for the first time ever.

Investors also bought billions of dollars of US Treasury notes and bonds - despite the S&P downgrade - because they still represented a safe haven, in comparison to most of the world’s alternatives.

“This is still the largest and most liquid market on the planet,’’ Johnson says.

Meanwhile, the stock market opened lower yesterday, as expected, and continued to sink through the day. Selling was so pervasive that every single stock in the Standard & Poor’s 500 index - yes, that’s 500 name-brand stocks - lost value.

There wasn’t much in the way of surprise developments or fresh analysis that prompted investors to keep selling through the day. It was all about fear.

There is a lot of emotion that goes into financial markets and how they react to events. Investors have endured two meltdowns in just over a decade and survived the scariest financial market of my lifetime in 2008.

Now, a pile of reports and developments suggest the economy is slowing to a chug, or worse, punctuated by the S&P downgrade of US Treasury debt. The grim spectacle of our federal debt ceiling negotiations and waffling by European nations over financial support for their neighbors has done nothing to engender confidence.

No one knows what it all means, and that’s an important point. Fear of the unknown is driving bruised investors away from anything that resembles risk.

“I think there is a tremendous amount of fear with 2008 so fresh in everybody’s minds,’’ says Kathleen Gaffney, comanager of the Loomis Sayles Bond Fund.

“You know you don’t sell when things are down,’’ she adds, “but that recent memory is so painful, and people are more comforted if everyone is doing it.’’

Falling markets don’t act rationally, and stocks have been sinking for more than a month now. The S&P 500 has lost about 17 percent of its value since early July, pushing close to bear-market territory, defined by a 20 percent slide.

The plunge yesterday was the worst single experience in that monthlong slide. The Dow Jones industrial average’s swoon of 634.76 points ranks sixth among all-time downers, as measured by points.

(On a percentage basis, trading was merely grim but not historic yesterday.)

Buyers may be hard to come by in the near future. Federal Reserve chairman Ben Bernanke may say something reassuring today and give investors a reason to take a breath. But the market’s impulse to run away from risk of any kind won’t be subdued in a day or by any single event.

Recovery from the kind of economic trouble we spent years getting ourselves into will itself take years to play out. The market’s path will continue to be scary.

The decision by Standard & Poor’s to reduce America’s credit rating was not a great surprise and had no profound impact on the economy. The fact that it helped trigger such a severe market reaction says more about the market’s state of mind than anything else.

Investors don’t know if we’re heading into recession, or whether Europe may tip into a true credit meltdown. But they no longer have any desire to take the risk.