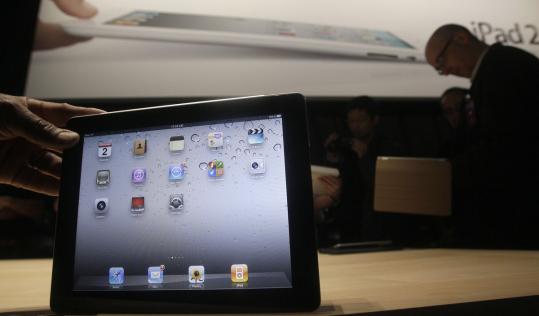 Fueled by the iPad (above) and iPhone, products not on the market five years ago, shares in Apple topped $400 for the first time. (Jeff Chiu/ Associated Press/ File 2011)
By Adam Satariano Bloomberg News / July 27, 2011

NEW YORK - Apple Inc., a week after reporting record sales and profit, surpassed $400 a share for the first time and is gaining ground on Exxon Mobil Corp. to become the world’s most valuable company.

Apple has climbed 25 percent this year and 7 percent since the company reported third-quarter results on July 19.

Apple, on the brink of bankruptcy when chief executive Steve Jobs reclaimed the top job more than a decade ago, now has a bigger market value than Microsoft Corp. and Intel Corp. combined, fueled by new products such as the iPhone and iPad.

“It started with the Mac, then iPods, iPhones, and now the iPad,’’ said Giri Cherukuri, head trader for Oakbrook Investments, which manages $2.7 billion, including Apple shares. “It’s incredible.’’

Apple’s rise comes amid a reversal of fortunes for rival makers of smartphones, including Research In Motion Ltd. and Nokia Oyj, which have lost market share and fired workers.

On Monday, RIM announced that it plans to cut 2,000 jobs amid slowing sales.

In April, Nokia said it would eliminate about 7,000 jobs.

Apple said last week that profit more than doubled to $7.31 billion on revenue of $28.6 billion, compared with the same period a year earlier.

The company had record sales of iPhones and iPads, products that did not exist five years ago but which now account for more than 70 percent of the company’s revenue.

Apple also has accumulated about $76.2 billion in cash and other holdings.

“I don’t see too much slowing them down,’’ Cherukuri said yesterday.