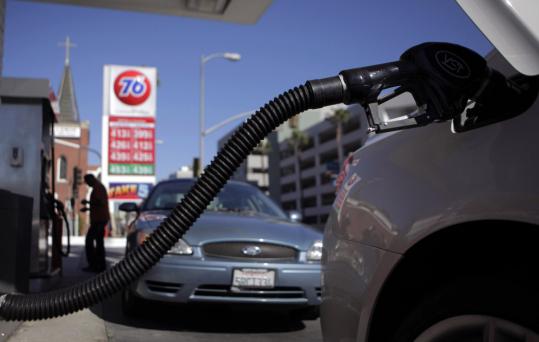 Higher oil and gasoline prices are making it hard for consumers to make household purchases, which holds back a US economy marked by high joblessness and a weak housing market. (Jae C. Hong/ Associated Press)
By Paul Wiseman Associated Press / April 7, 2011

WASHINGTON — Just as companies finally step up hiring, rising oil prices are threatening to halt the US economy’s gains.

Some economists are scaling back their estimates for growth this year, in part because flat wages have left households struggling to pay higher gasoline prices.

And regular unleaded gasoline retails for an average of $3.69 a gallon, according to AAA’s daily fuel gauge survey, up 86 cents from a year ago.

The higher prices have been driven by unrest in the Middle East and rising energy demand from a strengthening US economy.

Airlines, shipping companies, and other businesses have been squeezed. The rising prices are straining an economy struggling with high unemployment and a depressed housing market.

“The surge in oil prices since the end of last year is already doing significant damage to the economy,’’ said Mark Zandi, chief economist at Moody’s Analytics.

Unlike other kinds of consumer spending, gasoline purchases provide less benefit for the US economy. About half the revenue flows to oil-exporting countries like Saudi Arabia and Canada, though US oil companies and gasoline retailers also benefit.

For consumers, expensive energy siphons away money that could be used for household purchases.

Two-thirds of respondents in an Associated Press-GfK poll said they expect rising gasoline prices to cause hardship for them in the next six months. The March 24-28 poll had a sampling error margin of plus or minus 4.2 percentage points.

The oil shock and global instability are diluting the benefits of an improving job market. The US unemployment rate, though still high, is at a two-year low. And the economy has just produced the strongest two months of hiring since before the recession began.

Bernard Baumohl, chief economist at Economic Outlook Group, has slashed his estimate for growth this year to 2.8 percent from 3.5 percent. In 2010, the economy grew 2.9 percent.

Consumer spending accounts for about 70 percent of the economy. After adjusting for inflation and seasonal factors, consumers spent 0.3 percent more in February than in January.

But that’s unlikely to last. Gasoline prices are surging as inflation-adjusted incomes fall. Zandi estimated that higher oil prices shaved half a percentage point from growth in the January-March quarter.

A few months of $125-a-barrel oil would slash economic growth by a full percentage point, Zandi said. And a few months at $150 could push the economy back into recession.