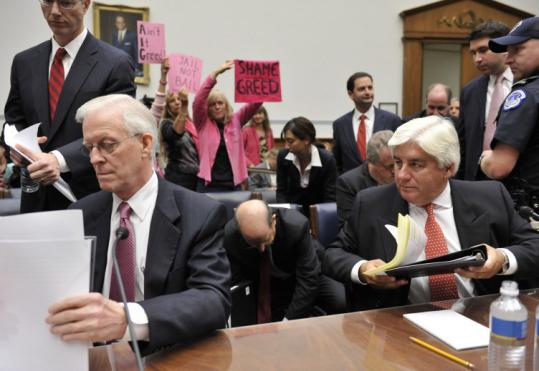 Maurice "Hank" Greenberg, AIG's chief executive for 38 years, submitted written testimony yesterday saying the risk controls he put in place were weakened or eliminated after he left in 2005. Martin Sullivan, a Greenberg protégé who was at the helm for the next three years, and Robert Willumstad, an ex-Citigroup Inc. president who was installed in June, blamed an accounting rule that forced the firm to book unrealized losses.

"When I left AIG, the company operated in 130 countries and employed approximately 92,000 people," Greenberg said in a written statement presented to the House Committee on Oversight and Government Reform. "Today, the company we built up over almost four decades has been virtually destroyed."

AIG, the largest US insurer by assets, was pushed to the brink of collapse last month, weakened by three quarterly losses of more than $18 billion tied to the housing slump. The bailout, agreed to Sept. 16, gives the United States a 79.9 percent stake in AIG in exchange for an $85 billion credit line. Edward Liddy, who was appointed the chief executive by federal officials, has already tapped $61 billion of that credit and must sell businesses to repay the loan.

All three former CEOs submitted written testimony that was released by the committee, and Sullivan and Willumstad appeared before the panel. Greenberg was ill, his lawyer said.

AIG's troubles emanated from its financial products unit, which sold credit-default swaps, protective contracts that plummeted in value as the securities they guaranteed declined in the fallout from the subprime mortgage collapse. Sullivan and Willumstad both said so-called mark-to-market accounting forced AIG to book unrealized losses on distressed mortgage-backed securities and credit-default swaps. The practice is being reviewed by the Securities and Exchange Commission.

"When the credit markets seized up, like many other financial institutions, we were forced to mark our swap positions at fire-sale prices as if we owned the underlying bonds, even though we believed that our swap positions had value if held to maturity," Sullivan, 54, said.

Willumstad, 63, portrayed a company frantically trying to keep afloat. The company was in talks with Warren Buffett's Berkshire Hathaway Inc. to improve AIG's liquidity if necessary, and was negotiating with banks to obtain more credit.

As markets fell further, AIG's would-be partners backed out and credit-rating companies that had said they would wait for him to unveil his long-term strategic plan on Sept. 25 were no longer willing to wait, putting the firm in a "vicious circle," Willumstad told the committee.

Lawmakers at the hearing separately lashed out at AIG for "wining and dining" its executives in a weeklong conference at the St. Regis Resort in Monarch Beach, Calif., just days after the bailout. The stay cost $440,000, said committee chairman Henry Waxman, a California Democrat.

"Have you heard of anything more outrageous?" said Representative Elijah Cummings, a Maryland Democrat, noting that the bill included $23,000 for spa services.

AIG spokesman Nicholas Ashooh said the trip was scheduled a year earlier to reward top salespeople for AIG's life insurance business. "It's as basic as salary as a means to reward performance," Ashooh said. "It was not top AIG executives running away to California."