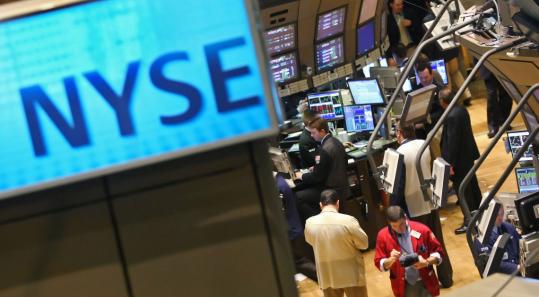 Stocks have fallen in the new year, with the Dow often dropping by triple digits in a session. (Daniel Barry/Bloomberg News)
Email|Print| Text size – + By Associated Press / January 12, 2008

NEW YORK - Wall Street plunged again yesterday amid renewed fears that the financial sector's troubles with bad credit won't soon end and that some consumers are buckling under the weight of a slowing economy. The major indexes each lost more than 1 percent, including the Dow Jones industrials, which finished down nearly 250 points.

The arrival of quarterly earnings reports has investors worried about how banks and brokerages have fared after suffering losses in the collapse of the subprime mortgage market. Traders appeared to grow more pessimistic ahead of reports due next week from the nation's biggest financial institutions. Merrill Lynch & Co., Citigroup Inc., and JPMorgan Chase & Co. are slated to weigh in next week.

Adding to investors' unease, Merrill Lynch might take a $15 billion hit from its exposure to soured subprime mortgage investments, according to The New York Times. The nation's largest brokerage is also said to be seeking another capital infusion to help shore up its balance sheet.

Michael Church, portfolio manager at Church Capital Management, said news from the financials is weighing on Wall Street, although he said investors shouldn't be surprised by the extent of the troubles.

"The financials are going to continue to be a problem," he said.

Stocks have skidded lower in the new year, with the Dow often falling by triple digits in a single session amid anxiety about a possible recession as well as the still-unfolding fallout from the mortgage crisis. The Dow is down almost 5 percent for the year, the S&P is off 4.6 percent, and the Nasdaq has lost 8 percent.

Oil prices were pressured by gains for the dollar against the euro and pound. A barrel of light, sweet crude for February settled down $1.02 at $92.69 on the New York Mercantile Exchange.

Traders showed little reaction to a Commerce Department report that higher energy prices drove the nation's trade deficit in November to its highest level in more than a year. The government said the gap shot up 9.3 percent to $63.1 billion, up from $57.8 billion in October.