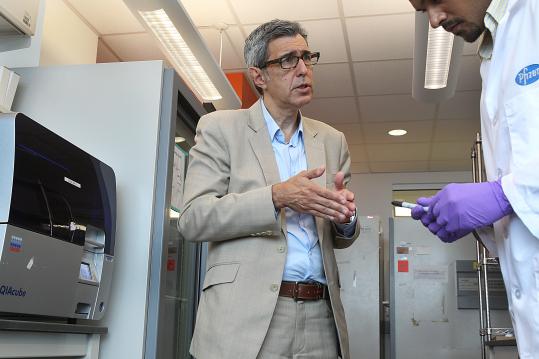 Pfizer Inc., the world’s largest pharmaceutical company, has a storied history of hunting for blockbuster drugs in its own labs. These days it is also hunting for collaborations with outside “physician-scientists” who could help it develop cures for diseases ranging from lung cancer to osteoporosis.

A natural habitat of this breed — doctors who treat patients, teach at academic medical centers, and run government-funded research labs — is Boston’s Longwood Medical Area, home to Harvard Medical School and a cluster of its famous teaching hospitals. That’s where Pfizer’s new Centers for Therapeutic Innovation has established its worldwide headquarters.

The drug giant is betting it can bring more treatments to market by working with academic researchers in medical hubs like Boston. It also has set up satellite centers in New York, San Francisco, and La Jolla, Calif., outside San Diego, to strike alliances in those areas. Overall, Pfizer is committing up to $100 million to such collaborations over the next five years.

“We’re trying to change biomedical research globally,” said Pfizer’s Jose-Carlos “J.C.” Gutierrez-Ramos in an interview from the company’s perch on the top floor of a new glass-faced office tower at 3 Blackfan Circle. “The old model is not efficient for us or for the academic medical centers,” said Gutierrez-Ramos, who is Pfizer’s senior vice president and head of biotherapeutics research and development.

Other companies also are eager to share the costs and risks of developing new drugs with partners in the Boston ­area. Novartis AG, Sanofi SA, and Merck & Co. are among the global drug makers accelerating their partnering moves in the region.

Earlier this month Sanofi, which raised its profile by buying Cambridge-based biotech Genzyme Corp., entered into a diabetes research deal with Harvard-affiliated Brigham and Women’s Hospital.

“Boston is without a doubt number one for pharmas trying to cash in on the hope of a mother lode” from academic drug research, said Kevin J. Gorman, managing partner at a Burlington life sciences consulting firm, Putnam Associates. “They’re placing bets on the roulette table. But it’s also a reflection that the internal efforts of the pharmas haven’t been terribly productive.”

While each company’s approach is different — Novartis is codeveloping drugs with biotechs, while Sanofi is investing in life sciences start-ups — Pfizer’s strategy may represent the most dramatic departure from its traditional research and development methods. The company signaled its intentions 17 months ago with the announcement it would move neuroscience and cardiovascular metabolic research operations to Cambridge from a sprawling campus in Groton, Conn.

Pfizer’s old business model involved either taking experimental treatments from the labs to the market by itself or buying companies that already had promising drug candidates. Both approaches were expensive — generating fewer successes and alienating investors at a time when some of the company’s best-selling products were losing their patent protection. That meant more competition from lower-cost generics.

Now, New York-based Pfizer is making fewer acquisitions and doing less early-stage research. Instead it is piggybacking more on the work of physician-scientists from other organizations. It is collaborating with Dr. Markus Frank at Harvard-affiliated Boston Children’s Hospital, for example, on a stem cell treatment for malignant melanoma. Pfizer also is partnering with Dr. David Salant at Boston Medical Center, a Boston University hospital, on a kidney disease therapy.

Pfizer brings more than its mighty financial resources to these relationships. The company has drug development expertise in everything from designing clinical trials to dealing with regulators. It also has amassed a “library” of antibodies and proteins that help researchers test drug candidates.

Perhaps most important, Pfizer is helping its partners to ensure the safety of experimental medicines by testing them in small groups of people before launching large-scale clinical trials, which are more costly and time-consuming.

“The failure rate [of clinical trials] is so high because, in the past, we didn’t learn enough about the behavior of the molecules in the context of humans with the disease,” said Gutierrez-Ramos.

Physician-scientists say the Pfizer collaboration has helped to focus their research.

“As basic scientists, we don’t have much experience with therapeutic development,” said Dr. Xi He, a professor of neurology at Harvard Medical School and research associate at Boston Children’s Hospital. He has been working with Pfizer on research involving cell interactions that could result in a treatment for osteoporosis. “Pfizer has a lot of experience with new therapies, but they’re looking for new targets — the specific mechanism that leads to a disease,” He said.

All of the relationships began over the last 12 to 18 months, so it is too soon to gauge whether they are making a difference, according to those involved.

“It’s still very, very early days,” said Anthony J. Coyle, vice president and chief scientific officer for Pfizer’s Centers for Therapeutic Innovation. “But we’re bringing the know-how for taking a great idea from these [academic] labs and turning it into something that looks and feels like a drug. Nobody can do it on their own anymore.”

While drug companies are optmistic that the new research approach has the potential to generate more medicines faster, outsiders are reserving judgment.

“There are no guarantees in the world, but they have to try everything they can,” said Gorman at Putnam Associates.

Pfizer, which paid $68 billion for Wyeth Pharmaceuticals in 2009, now has a Massachusetts workforce of about 3,000, including about 1,800 employees in research and development, in Boston and Cambridge and at a former Wyeth site in Andover. The Centers for Therapeutic Innovation will initially be lean, employing only about 80 Pfizer scientists working with a like number of Pfizer-funded academic researchers on various projects.

The teams will set a series of research milestones. If the goals are met, Pfizer will invest more money to move the research forward. If not, the academic researchers retain rights to the intellectual property and are free to find other partners or financial backers.

The collaborations aren’t likely to generate large numbers of jobs unless they result in drugs that can be commercialized locally, which would probably take years. For now, Pfizer scientists and their academic partners are content to aim for getting the new model right.

“We have to marry their knowledge of basic research with our expertise in development,” Pfizer’s Gutierrez-Ramos said. “This is like the Bible to us.”