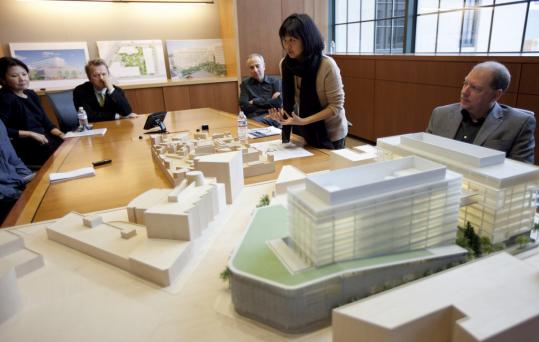 Lin is among several prominent designers Novartis hired to create a $600 million three-building laboratory and office complex that will be the centerpiece of its worldwide research operations based in Cambridge.

Clad in glass, terra cotta, and granite, the complex will also include retail shops to fill in a large hole in the commercial strip along Massachusetts Avenue, as well as a 1.35-acre park adjacent to the Massachusetts Institute of Technology.

Lin’s concept is a building that gradually rises along Massachusetts Avenue, with a main entry and an interior courtyard filled with trees and meandering pathways.

“I wanted this to feel not like an isolated island, but something penetrable for everyone from MIT to walk around,’’ said Mark Fishman, the president of the company’s Institutes for Biomedical Research.

“We want people to mix there just as they would at a university.’’

The Lin and other buildings were approved by the Cambridge Planning Board Tuesday night. Novartis has already begun site work on the property and expects to complete the complex in 2015.

Lin, who came to prominence for designing the Vietnam Veterans Memorial in Washington, D.C., in 1982, said she wanted the Novartis complex to improve the connection between Central Square and the Charles River by filling the now-barren strip of concrete with more active uses and landscaping.

The facade of her building on Massachusetts Avenue will be covered with the same type of light-gray granite that was used to construct Quincy Market at Faneuil Hall and many of the bridges in the area.

“The idea is to have the New England stone wall come out of the landscape and gently float up’’ to balance the generous amounts of glass used elsewhere in the complex, Lin said. “We’re trying to create something almost more campuslike in scope and feel. It’s very noncorporate.’’

The new Novartis property is one of many efforts by global biotechnology firms to build stronger connections to MIT to improve recruiting and research collaboration. Novartis itself already has several well-established ventures, one a $65 million, 10-year deal with MIT for research into revolutionizing the process of manufacturing medicines. Another 10-year pact is with Dana-Farber Cancer Institute on cancer research.

Other biotech operations that are expanding in the area include Biogen Idec, which is relocating its headquarters to Kendall Square, and Pfizer Inc., which will move into a new research building being built by MIT, also in Kendall Square. The Broad Institute, a research organization, is also building a new facility in Kendall Square.

“Cambridge is hot,’’ said city manager Robert Healy. He said the Novartis project, through its distinctive design and large park, will serve as a leading example of the city’s interest in getting more open space and retail offerings in that area.

“It doesn’t look like it’s just the front lawn of the business. It looks welcoming,’’ Healy said. “And that’s really what we’re trying to do.’’

Novartis’s new complex will be at 181 Massachusetts Ave., across from several existing Novartis offices, including the headquarters of its global research operations. When complete, the complex will be home to more than 1,000 employees now spread among several buildings. Already Cambridge’s largest corporate employer, Novartis expects to add 300 employees to its Cambridge payroll during the next five years, bringing its total workforce there to about 2,400.

A second building in the new complex will be eight stories and was designed by New York architect Toshiko Mori. In addition to other large commercial projects across the country, she has designed exhibits for the Museum of Modern Art in New York and other cultural institutions. Mori’s building will be made of glass and terra cotta and will feature a visible diagonal staircase that ascends along the front of the building, as well as five “micro atriums’’ that will serve as gathering spaces for Novartis scientists.

The overall architect of record for the project is Cannon Design of Boston, which incorporated Mori’s and Lin’s designs into the broader concept for the complex and completed the engineering.

The Mori building will serve as a backdrop for a 1.35-acre courtyard by Michael Van Valkenburgh, a landscape architect who also designed the waterfront park at the Boston Children’s Museum and led the restoration and redesign of Harvard Yard.

Beyond its design attributes, Fishman said, the new complex will change the way Novartis conducts research. The firm is seeking to develop new drugs by tracing the so-called molecular pathways between and among cells, in essence mapping the fundamental biological connections in the body to better understand how diseases form and grow within human tissue.

Inherent in those objectives is a need for greater collaboration across the firm’s many research groups, Fishman said, so that instead of distinct teams focusing on specific diseases, those groups are working across disciplines to help develop new drugs.

To accomplish that, the complex features more conference rooms and informal spaces designed to get scientists to cross paths and share ideas throughout the day.

“We’re trying to move away from any kind of specific disease-based, old-fashioned mentality,’’ Fishman said. “I’m not sure that in the future we’ll even be able to designate a space as oncology or cardiovascular. Having a team is extremely important in drug discovery . . . because it takes 10 years to go from an idea to serious clinical trials.’’

Construction projects in the Boston area