Development refocused toward getting more of its drugs to market 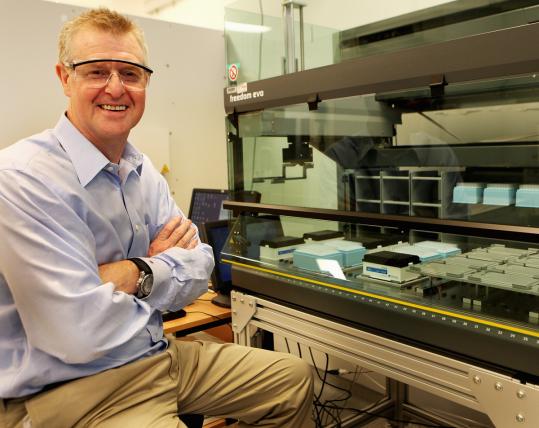 WALTHAM - The pharmaceutical giant AstraZeneca PLC is reshaping its research and development operations with a growing presence in the Boston area.

The goal is to ensure that more of the Anglo-Swedish company’s medicines make it to market, said Martin Mackay, who was recruited from a rival, Pfizer Inc., last summer to be AstraZeneca’s president of research and development.

Toward that end, Mackay said, he has refocused research, conducting what he calls a “root-and-branch analysis.’’ That’s served to reduce the number of disease areas AstraZeneca scientists target in fields ranging from neuroscience and cardiovascular diseases to inflammation and respiratory disorders.

Too often, he said, the company used to measure research progress more by the number of compounds entering development, rather than by how many drugs won approval to be sold.

While it has closed research labs in the United Kingdom, Sweden, and Wilmington, Del., AstraZeneca has expanded its research campus, which specializes in developing treatments for cancer and infectious diseases, off Route 128 here. The Waltham center has about 600 employees, with another 300 working at AstraZeneca’s manufacturing site in Westborough.

The company also has stepped up collaborations in personalized medicine and other areas with university researchers and biomedical start-ups worldwide. In the Boston area, it has more than 150 academic collaborations, including research alliances with Massachusetts General Hospital, Dana-Farber Cancer Institute, and Lexington biotechnology company Cubist Pharmaceuticals Inc.

One move AstraZeneca has not made is to follow the lead of other drug companies that branched out from their core pharmaceuticals business into generic drugs or over-the-counter remedies.

“Many of our competitors have diversified,’’ said Mackay, a native of Scotland. “We’ve said very clearly that we want to be a pure play pharmaceutical company across the globe. We are focusing on programs that have the best chance of becoming medicines.’’

For instance, in July AstraZeneca gained approval from the Food and Drug Administration to sell Brilinta, tablets used with aspirin to reduce heart attacks and cardiovascular deaths in patients with acute coronary syndrome. It is awaiting an FDA decision this fall on its application for dapagliflozin, an inhibitor used to treat diabetes, though an advisory panel recommended against approval because of potential side effects. The company is also in late-stage clinical trials of fostamatinib disodium, a treatment for rheumatoid arthritis, and is expected to seek approval in 2013.

The company, based in London, hasn’t disclosed how many research jobs have been eliminated globally over the past year. Mackay said much of the savings from the cuts has been invested into research deals, a trend also seen at other drug makers. Mackay said he has changed about 60 percent of AstraZeneca’s research leadership staff, hoping to inject new energy and ideas into the operation. Several of the company’s research executives attended a leadership program at Harvard Business School this summer.

Among the new hires is Manos Perros, poached from Swiss drug giant Novartis AG to head AstraZeneca’s infection medicines group based in Waltham. AstraZeneca and Merck & Co. have been among the only big drug companies investing in treatments for infectious diseases, though smaller biotechnology companies, such as Cubist, also concentrate on that market.

Infectious diseases, often acquired in hospitals, result in tens of thousands of deaths each year, many from “superbugs’’ that didn’t exist a generation ago and are resistant to current antibiotics. US lawmakers have proposed legislation making new antibiotics eligible for fast-track approval and extended patent exclusivity. “It’s a fact that we need more drugs,’’ Perros said.

While the anti-infection drug pipeline in Waltham consists of mostly early stage compounds - meaning they are a long way from approval - AstraZeneca is in late-stage trials in partnership with Forest Laboratories of New York for an inhibitor called beta-lactamases, which overcomes antibiotic resistance.

Mackay and his team have also sought to set themselves apart from rivals by seeking feedback from “payers,’’ the health insurance companies that reimburse doctors and hospitals, on what types of drugs they are willing to fund. Typically, he said, they will pay for treatments that improve upon the current standard of care, reducing the number of costly surgeries, procedures, and hospitalizations for which they would otherwise have to reimburse.

“They’re keen on outcomes,’’ Mackay said. “They want to know, ‘Do fewer patients get heart attacks [with a drug candidate]? Do fewer need medical interventions or surgical interventions?’ ’’