Rendered speechless, but holding out hope 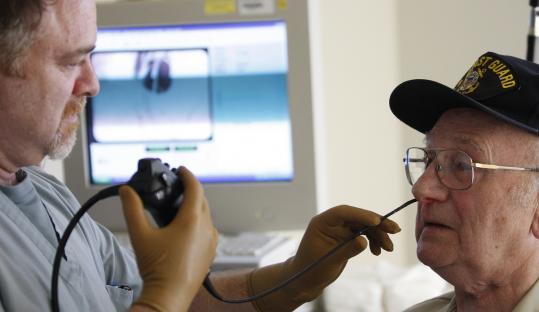 Kendall Morse, a 77-year-old folk singer with a penchant for storytelling, has one tale that he would especially like to tell: the way he got his voice back.

After a decadelong battle with vocal cord cancer, all that is left of Morse’s low tenor is a good-humored, raspy whisper. But an ambitious research project that has been funded by a patient group, led by a Massachusetts General Hospital surgeon, and hinged on the expertise of biomedical engineers at MIT, is giving Morse hope that some day, he’ll be able to sing to his wife, Jacqui.

“I feel like a one-legged man,’’ Morse said during a recent checkup visit at Mass. General, a four-hour round trip from his home in Scarborough, Maine. “I can’t think of anything I’d rather have than my voice back.’’

In a laboratory a few blocks away from the office where Morse goes for regular checkups, scientists have been developing a gelatinous substance that vibrates just like the vocal folds that had to be surgically removed from Morse’s throat. Using a polymer already used in approved medical devices as their raw material, the researchers have perfected a gel that could be injected, replacing tissue that has been damaged, stiffened, or removed in surgery - and which will, they hope, restore patients’ lost voices. Next year, they hope to do the first tests in a small group of people.

“It will be tunable. There will be different demands for a voice,’’ said Dr. Steven Zeitels, director of the Center for Laryngeal Surgery and Voice Rehabilitation at Mass. General who has cared for some of the most iconic voices in the world - counting Steven Tyler, Julie Andrews, and Roger Daltrey among his patients.

The elasticity and the properties of the gel can be personalized, Zeitels said, so that they meet the needs of the particular vocal folds in distress, with the ultimate hope that they could help the cancer patient who wants to be able to speak audibly again, the professional singer who needs help recovering from laryngitis in time for a concert, or the schoolteacher whose career is jeopardized because he or she is having trouble talking over the students.

Since 1997, Zeitels, also a professor of laryngeal surgery at Harvard Medical School, has been searching for a way to help patients regain their voices. In 2002, he partnered with Robert Langer, a biomedical engineer from MIT - a collaboration that brought two crucial strands of expertise together: Zeitels’s deep insights into how the voice works and goes awry and Langer’s abilities to engineer solutions to biomedical problems.

“By and large, what people have done is taken materials already existing in your house, and then they use them in patients - so if you look historically, the material in a lady’s girdle is the material in an artificial heart,’’ Langer said. “The major thing we’ve tried to do over the last 30 years is rather than doing that, take a fundamental look at what you want’’ and build the solution that best solves the problem.

The material would need to be soft and elastic - so it could “ripple, like a flag blowing in the breeze,’’ Zeitels said. Sandeep Karajanagi, a former postdoctoral researcher in Langer’s laboratory who now heads the Laboratory for Biomaterials and Drug Delivery at Zeitels’s center, found a way to mimic the properties of the vocal folds with a clear polymer gel, similar to Jell-O, that ripples when air is blown by it, just like a vocal cord.

Daniel Kempler, chairman of the department of communication sciences and disorders at Emerson College, said there is lots of room for improvement in treating patients with a variety of voice problems.

“In many places, the doctors don’t have enough training or the experience or the access to a substance or practice to feel comfortable doing it,’’ Kempler said.

The new technology has yet to be tested, but patients who might benefit from it include cancer patients and elderly people, whose voices naturally undergo changes as their vocal folds stiffen.

In a paper published earlier this year, researchers tested the new injectable gel on dogs’ vocal folds. On high-speed video, their vocal folds vibrated normally, with no safety problems.

Zeitels anticipates that the technology may ultimately be commercialized by a startup company.

For Kendall Morse, the hope is that their research will speed along and Jacqui will no longer have to hush a crowd by yelling “Kendall’s talking!’’

“If I go to a concert or gathering of musicians, it’s very difficult for me to not to be able to join in,’’ Morse said. “You can’t communicate; you can’t get above the din.’’