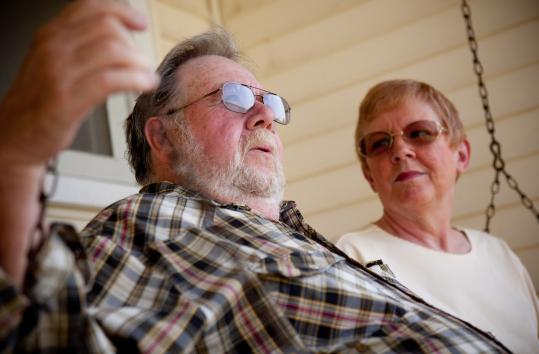 Ray and Jo Kelly, retirees from Conklin, Mich., have taken the drug Lipitor and expected to begin taking a generic this fall. (Adam Bird/Associated Press)
By Linda A. Johnson Associated Press / July 25, 2011

NEW YORK - The cost of prescription medicines used by millions of people is about to plummet.

The next 14 months will bring generic versions of seven of the world’s 20 best-selling drugs, including the top two: cholesterol fighter Lipitor and blood thinner Plavix

The magnitude of this wave of expiring drugs patents is unprecedented. By 2016, blockbusters with about $255 billion in global annual sales are set to go off patent, notes EvaluatePharma Ltd., a London research firm.

Generic competition will decimate sales of the brand-name drugs and slash the cost to patients and companies that provide health benefits.

Top drugs getting generic competition by September 2012 are taken by millions every day: Lipitor alone is taken by about 4.3 million Americans, and Plavix by 1.4 million. Generic versions of big-selling drugs for blood pressure, asthma, diabetes, depression, high triglycerides, HIV, and bipolar disorder are also coming by then.

The flood of generics will continue for the next decade or so, as about 120 brand-name prescription drugs lose market exclusivity, according to Medco Health Solutions Inc., a prescription benefit manager.

“My estimation is at least 15 percent of the population is currently using one of the drugs whose patents will expire in 2011 or 2012,’’ said Joel Owerbach, chief pharmacy officer for Excellus Blue Cross Blue Shield, which serves most of upstate New York.

Those patients, along with businesses and taxpayers who help pay for prescription drugs through corporate and government prescription plans, collectively will save a small fortune. Typically, generic drugs cost 20 to 80 percent less than brand names.

Doctors hope the lower prices will significantly reduce the number of people jeopardizing their health because they can’t afford medicines.

Dr. Nieca Goldberg, director of the Women’s Heart Program at NYU Langone Medical Center in Manhattan, worries about patients who are skipping checkups and halving pills to pare costs.

“You can pretty much tell by the numbers when I check the patient’s blood pressure or cholesterol levels,’’ that they have not taken their medications as often as prescribed, she said.

Even people with private insurance or Medicare aren’t filling all their prescriptions, studies show, particularly for cancer drugs with copays of hundreds of dollars or more.

The new generics will slice copayments of those with insurance. For the uninsured, who have been paying full price, the savings will be much bigger.

Generic medicines are chemically equivalent to the original brand-name drugs and work just as well for nearly all patients.

When a drug loses patent protection, often only one generic version is on sale for the first six months, so the price falls a bit initially. Then, several other generic makers jump in, driving prices down dramatically.

Last year, the average generic prescription cost $72, versus $198 for the average brand-name drug, according to the consulting firm Wolters Kluwer Pharma Solutions. Those figures average all prescriptions.

Average copayments last year were $6 for generics, compared with $24 for brand-name drugs given preferred status by an insurer and $35 for nonpreferred brands, according to IMS Health.

Among the drugs that recently went off patent, Protonix, for severe heartburn, now costs just $16 a month for the generic, versus about $170 for the brand name. And of the top sellers that soon will have competition, Lipitor retails for about $150 a month, Plavix costs almost $200 a month, and the blood pressure drug Diovan costs about $125 a month. For those with drug coverage, their out-of-pocket costs for each of those drugs could drop below $10 a month.

For people with no prescription coverage, the coming savings on some drugs could be much bigger. Many discount retailers and grocery chains sell popular generics for $5 a month or less to draw in shoppers.

The impact of the coming wave of generics will be widespread - and swift. Insurers use systems that make sure patients are switched to a generic the first day it’s available.

“A blockbuster drug that goes off patent will lose 90 percent of its revenue within 24 months. I’ve seen it happen in 12 months,’’ says Ben Weintraub, a research director at Wolters Kluwer Pharma Solutions.

Twenty drug approvals in the United States this year, and others in the next few years, will help replace the revenue.