Amgen Inc., the world’s largest biotechnology company, has been raising its profile in the Boston area, acquiring a Woburn company with a novel cancer-fighting technology and hiring more scientists at its research site in Cambridge’s Kendall Square.

Its purchase of BioVex Group for as much as $1 billion, including $425 million upfront and up to $575 million in potential milestone payments, closed last week. The deal gives Amgen ownership of BioVex’s promising OncoVex vaccine, which is in late-stage clinical development to treat advanced melanoma and head and neck cancer. If approved for those treatments, the vaccine eventually could be deployed against breast and prostate cancer.

“We clearly have a greater financial underpinning now,’’ said BioVex founder and chief technology officer Robert Coffin, who built the company on research he initially conducted at University College London. “Being owned by Amgen will give us the backing to be able to develop OncoVex more broadly for a range of indications.’’

Amgen, meantime, is busy filling more than a dozen job openings for biologists, chemists, and researchers at its One Kendall Square drug discovery lab, which opened in 2001. And while senior executives at Amgen say they are not explicitly trying to poach talent from nearby biotechnology company Genzyme Corp. — which last month struck a deal to be sold to France’s Sanofi-Aventis SA — they are welcoming applications from Genzyme scientists and researchers.

“The fact that Sanofi will be acquiring Genzyme might mean that some people working at Genzyme who weren’t looking might be looking now,’’ said Dr. Roger M. Perlmutter, executive vice president for research and development at Amgen’s global headquarters in Thousand Oaks, Calif. “If they call us, we’ll pick up the phone.’’

Amgen’s research lab now employs about 200 people, while BioVex has about 65 employees in Woburn and another 25 in Oxford, England. Amgen also operates a 1,000-person drug manufacturing plant in West Greenwich, R.I.

Jonathan P. Gertler, senior partner at Back Bay Life Science Advisors, a Boston consulting firm, said biotechnology companies seeking to expand their product pipelines have been working in two ways: buying companies with drugs in late-stage development, and setting up research labs in innovation hubs such as the Boston area, where they can collaborate with start-ups and academic researchers. Gertler said Amgen is pursuing both approaches.

“It’s not just an isolated strategic move to acquire BioVex,’’ said Gertler. “It’s part of their innovation sourcing, accessing the Boston biotech cluster. Amgen has had less of a presence here than others.’’

Coffin, whose formerly venture-backed company will change its name to Amgen, said it will push forward with plans to file a new drug application with the Food and Drug Administration next year for OncoVex to treat melanoma. That is expected to be followed by a second application in 2014 to allow it as a drug to combat head and neck cancer. Amgen’s resources will boost the treatments’ sales and marketing, he said.

“This is a major boost for biotech in this area,’’ Coffin said.

Perlmutter, who did his clinical training at Massachusetts General Hospital, said Boston is an attractive biomedical area where Amgen can pursue research from neuroscience to oncology. One of its best-selling drugs, Embrel, which treats autoimmune disorders, was built on research from MGH and became the largest generator of licensing revenue in the hospital’s history.

But while it keeps hiring at its Cambridge research lab, Perlmutter said Amgen has no plans to launch the kind of major expansion here that other big drug makers, such as Sanofi and Switzerland’s Novartis SA, have undertaken in recent years.

“It’s been a stormy time for Boston-Cambridge biotech lately,’’ he said, referring to the Genzyme deal. “But we’re doing fine. Amgen has been very successful, and we’re continuing to look for new opportunities. The access to talent there is terrific.’’ 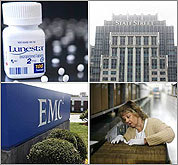