Krafts give $20m to draw doctors into community 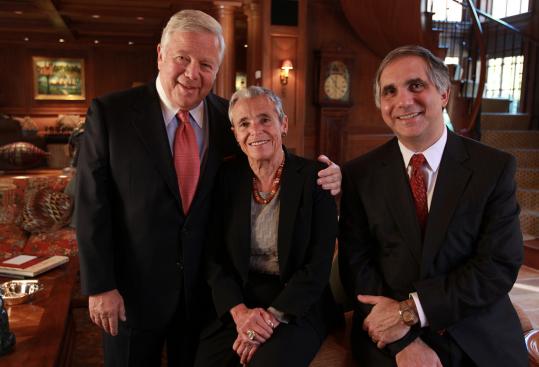 With a $20 million gift from Robert and Myra Kraft, Partners HealthCare is launching a program to attract doctors and nurses to Massachusetts community health centers, the cornerstone of the push to reduce health costs and care for newly insured patients.

The gift to Partners HealthCare System Inc. will be used to pay off up to $50,000 of the medical school loans of physicians and nurse practitioners, as well as finance fellowships in targeted specialties and for master’s degrees. In return, caregivers must work for two to three years in a health center or other community-based setting to care for needy patients.

Robert Kraft, owner of the , said he intends the donation to serve as seed money that will inspire other philanthropists as well as states to support similar programs to increase the number of internists, family practitioners, pediatricians, psychiatrists, and obstetrician/gynecologists dedicating their careers to community medicine rather than to higher-paying, more glamorous specialties and private practices. Many primary care doctors are now so busy they will not accept new patients.

Kraft said that even as “well-to-do people from the Middle East,’’ for example, fly to Boston for treatment at the city’s elite teaching hospitals, “people living in our own communities aren’t treated properly,’’ either because they don’t have access to care or don’t believe they do.

“We wanted to do something to support everyone getting the kind of health care my family gets,’’ said Kraft, during an interview at Partners’ headquarters in the Prudential Tower last week. “What I worry about in this country are the people who are hurting the most.’’

Over the next five years, Partners chief executive Dr. Gary Gottlieb estimates, the Kraft donation will support more than 100 physicians, nurse practitioners, and other providers caring for about 200,000 patients.

The gift will create the Kraft Family National Center for Leadership and Training in Community Health to oversee the programs. A portion of the funding will support community-based programs at Dana-Farber Cancer Institute.

Kraft would not say specifically how and why conversations between him and Partners began but he said he had been talking to Gottlieb about a major gift for nearly a year. Partners is the parent organization of Massachusetts General and Brigham and Women’s hospitals, and the Krafts have deep professional and personal connections to Harvard’s largest teaching hospitals.

Robert Kraft’s longtime primary care physician is Dr. Marshall Wolf at the Brigham, one of the most esteemed internists in the country, and in 2002 he had heart bypass surgery at the hospital. He is on the board of Dana-Farber, which has a shared cancer program with Partners, and his family started the Robert K. Kraft Family Blood Donor Center there. Myra Kraft is on the Brigham board. Their son Jonathan Kraft is on the Mass. General board, and doctors from that hospital have treated the Patriots since 1994. And Partners doctors work at an outpatient center at Kraft’s Patriot Place in Foxborough.

“When you’re vulnerable, it’s a time when you really appreciate people who will go way beyond what you’d hoped for,’’ Robert Kraft said. “I and other family members have received great care in these institutions.’’

Kraft wouldn’t say whether the gift to Partners is the largest his family has made for health care, but said “we’re not giving away $20 million every week of the year.’’

Much of the Krafts’ gift is directed toward increasing the number of primary care doctors — usually internists, family practitioners, or pediatricians — who are often the first stop for patients with undiagnosed problems. They provide continuing care for a wide range of conditions and illnesses, as well as routine exams and tests to prevent disease. The Obama administration is counting on these doctors to treat more than 30 million patients expected to get insurance under the national health law, and to play a bigger role in coordinating their care and helping control soaring health care costs.

But many medical school graduates are deterred by the grueling hours — doctors often have to be available nights and weekends — and relatively modest pay. The average hourly wage for an internist is about $58, compared with about $112 for an allergist/immunologist or $108 for an orthopedic surgeon, according to data gathered by researchers at the University of California Davis.

Primary care hasn’t been “the glory kind of profession,’’ said Dr. Jeff Collins, 49, an internist and pediatrician at the Chelsea Health Center, which is owned by Mass. General. And working in a community health center with low-income patients and those who don’t speak English can be particularly off-putting for some doctors. “Decision making is very team oriented. If you’re one of those doctors who wants to be the be-all and end-all and make the final decision, it doesn’t work that way’’ here, he said.

As a result of all these factors, it’s hard to recruit doctors and the center has many vacancies. Collins, who is medical director of urgent care, said while doctors see all patients who come in for urgent treatment, they cannot provide new patients with permanent doctors because most practices at the center are full. “We call around to other practices. Sometimes we find a doctor for them, and sometimes we don’t,’’ he said.

Still, health care leaders say the situation overall is improving, at least in Massachusetts. Community health centers have expanded with increased government dollars, an anonymous donor in October gave Harvard Medical School $30 million to create a major center aimed at transforming primary care, and a previous loan repayment program funded largely by Bank of America and launched in 2007 has drawn dozens of doctors into health centers.

Leaders applauded the Krafts’ gift as a major step forward.

“We’re going to need more and more folks working in this part of the profession,’’ said Sarah Iselin, president of the Blue Cross Blue Shield of Massachusetts Foundation. “Anything we can do to make it a more appealing choice to kids in medical school is wonderful.’’

Gottlieb said he wants to recruit the very best people from well-respected residency programs and create a pipeline of those people rather than having to fight to convince doctors to work in community practices. Under the Kraft program:

■ Fellows will receive two years of training in community medicine and will earn a master’s degree from the Harvard School of Public Health or another Harvard school. The program will pay for their tuition and provide up to $50,000 in loan repayment, in return for three years working in a community health center or another program for the underserved. It does not have to be a health center owned by Partners.

■ Physicians, nurse practitioners, nurse midwives, and psychiatric nurses who are already practicing and commit to two years in a health center will be eligible for up to $50,000 in loan repayment and participate in a special mentorship and education program.

Graphic Primary care physicians per 100,000
Your comment is subject to the rules of our Posting Policy
This comment may appear on your public profile. Public Profile FAQ